You Cannot Designate Yourself an Ally by Wearing a Safety Pin

by Aysha Qamar
in Social Activism
0 0
0

This past week, words have been difficult for many of us to put together. Waking up last Wednesday, I wasn’t able to process what had just happened. Never have I woken up to so many texts of fear. Every social media site I visited was bombarding me with posts of fear, denial and anger.

I get it—we are all upset, so I understand not knowing what to feel. Fearing for your family. Fearing for your friends who identify as LGBT, disabled, Muslim, immigrant, women—the list goes on. I get it: you’re upset—but that does not mean you can take your frustration out on those who are expressing themselves differently than you, those who are working on their civic engagement.

[Read Related: The Possibility of Impossibilities After the Election]

The same people mocking those upset with the election, mocking those who need help–I have seen wearing safety pins. They are labeling themselves as an ally, a safe space.

Now, what does this safety pin symbolize?

The intention of this safety pin was to mark a person safe. To remind a marginalized individual that they can look to this person to help them keep safe. Mocking someone who has been triggered by this election does not make you safe. Choosing who you want to support and protect does not make you safe. If you are going to self-designate as an ally and wear that pin–you better be ready to be there.

Wearing a pin does not make you an ally–your words and actions do.

Wearing that pin is meant to get you involved. It’s a reminder that your civic engagement does not end after election day. It shows you support marginalized communities, that you are willing to intervene when violence is brought upon them.

The idea of using safety pins for solidarity may have good intentions but many people do not realize what they are signing up for. Before you put on that pin, you need to ask yourself are you really an ally? What does it mean to be an ally?

A safety pin doesn’t change the danger we all face as marginalized communities. A safety pin will not make me feel safer–the meaning, the action behind it will. If you really are an ally, you will make a difference for people who get hurt because of their identities.

Wearing a safety pin doesn’t help anyone–while the intention was commendable, there is no solidarity without strategy. While I credit the intention of the campaign, to encourage support through a safety pin, it is not enough. Not to mention, a lot could go wrong with these pins. Already, white supremacists have taken over the idea to depict themselves as allies. So ask yourself does someone wearing a safety pin really mark them as safe? 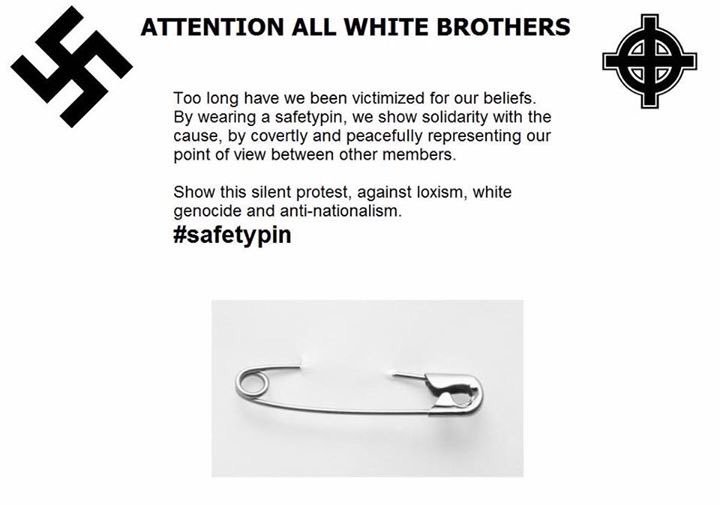 [Read Related: How Does My Interracial Relationship fit into the new America?]

I am not saying don’t wear a safety pin–go ahead and wear it. But remember: if you chose to wear one you must be willing to be a true ally, and you must understand the purpose behind it. You can’t depict yourself as something you are not; wearing that pin cannot be the end of your support. It is not an empty gesture. Wearing that safety pin is not enough.

I’m not telling you to take that safety pin off–I am reminding you that one should not need to see a pin to know you are supportive. A pin doesn’t make you an ally or a safe space–your actions, your support, your resistance to the oppressor does.