Were we born or raised this way?

Almost as soon as a baby Indian girl is born she is thrown into a whirlwind of designations and tasks.

Destinies, one would call it. Fates.

Being whisked away by a rich Indian man, providing for the children or bringing honor to the family by following all the carefully placed rules.

Of course, with all the growing modernization and assimilation in the United States many Indian-American families aren’t strictly taught with this destiny. Yet it somehow seemingly becomes written in every Indian women’s fate.

It’s portrayed in the news, the media, and even by our family members. We see our sisters in our motherland suffering horrific gang rapes and assaults because they did not return a simple hello or the fact that they were seen out too late. They were not in line with the rules, the unwritten rules. They were warriors, rule breakers. They were women trying to make a name for themselves just like the men who hurt them. They were the faces of equality.

Yes, I’m talking about 23-year-old Jyoti Singh, who was taking the bus with her male friend back from a movie late at night and was brutally raped by 5 men.

Yes, I’m talking about 24-year-old S. Swathi, who was cold-bloodedly murdered at the train station on her way to work by a young man whom she refused to marry.

Why are our sisters getting killed and raped by the second for the approval they refused to seek?

We place an immense amount of interest on one sex than the other, for the sole reason that he is the “son” of the household and only he will single-handedly bring honor and money to our family.

We are disappointed by a baby girl and call her a curse. We ingrain in her life that she is unworthy without a man and she is worthless within the society which she lives in. With any steps that she takes to escape those confines, she is met with criticism and obstructions as she attempts to climb over the insults and threats. How is she supposed to grow if not only her parents are stopping her but also the world?

From the start, her birth is considered as flawed and her chances or survival is minimal. She is thrown into a society that is against her at every second and will not bring her justice where justice should be served.

We live in a society where I fear when I grow up to give birth to a daughter, that she will have to grow up in a world where the murders and rapes of her sisters are left without justice. I do not want her to see this terror and grow up in fear of breaking the boundaries and following her dreams. In fear that what happened to Jyoti and Swathi would happen to her.

Bring justice, and let the voice be heard. 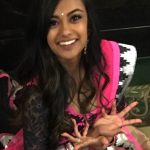 Amy Kumar is a pre-med student at Baylor University and also a Certified Medical Assistant who lives in the Washington D.C area. She hopes to inspire south Asian women to live up to their dreams and advocate for their rights, whether it may be, loving their skin color or fighting for equality. She stands right with them. She also loves to dance both Bollywood and classical Indian forms and enjoys baking and watching Netflix.You can follow her on Instagram at haroldand_kumar