Why One Brown Girl Wants you to Please Borrow Her ‘Brownness’

I have to admit, upon my first, second and then the third encounter with the term “cultural appropriation” I had to Google it to gain a greater understanding of its meaning.  As I read several definitions and examples online, I understood the intent of the term but became infuriated by the examples given to explain it.

“Borrowing” is the key feature used to describe cultural appropriation and that in itself is misleading. The current definition of cultural appropriation is also hypocritical to its core when used to accuse a predominant culture of stealing and then diluting specific aspects of the minority culture. Its connotation is negative and using it to describe the emergence of Indian culture in American culture takes away from the ideology that America is a melting pot.

I’m a born and bred New Yorker, with parents from Guyana and ancestors from India.

[Read Related: The Blatant Cultural Appropriation in “Fuller House” is Not Cool]

Honestly, how do I even know what is culturally mine? I am infused with East Indian, West Indian, and American culture. Yes, a saree and bindi are representatives of a piece of my identity, but it is not who I am. Pepper pot, curry, and roti are also indicative of who I am but do not solely define me. I enjoy old school Bollywood songs, upbeat soca music, and American pop music. I am blended: this identity emerged from the interplay of the majority and minority cultures of my great-grandparents, grandparents and parents. If asked why I wear sarees or ethnic Indian outfits, I would be unable to explain its history or significance. Why should I expect someone outside of my culture to explain it?

Seeing Coldplay incorporate Holi into their newest music video is not an insult to me, I embrace their desire to want to understand and represent the culture. I beam when I hear notes of a sitar in a non-Bollywood song and soca beats in an American pop song.  Witnessing Bollywood present females in crop tops and jeans is equally not insulting; kudos to them for recognizing and displaying trends that are outside of their norm.

[Read Related: Representation or Appropriation in Coldplay’s ‘Hymn for the Weekend?’]

The world is becoming smaller with technology. Twenty years ago, understanding the concept of a saree was a bit more difficult as was buying a sitar, (Where do I get it from? How do I tie a saree? How would I learn to play a sitar?) These items were that of “the other, the unknown” or “the unfamiliar.”  Now the Internet offers a haven of online stores to purchase a host of what I term “brown” items as well as tutorials on how to utilize them. Let’s all wear sarees and play sitars if we

Let’s all wear sarees and play sitars, if we so, please!

These items inherent to South Asians are considered culturally appropriated, but here’s why I disagree:

Bindis are worn on the forehead and indicative of a women’s marital status. Red bindis are worn by married women, black (or no bindis) are worn by widows. Nowadays, girls wear a host of colorful bindis to weddings and parties.

Why do we care to advertise our marital status in 2016?

I consider bindi’s a pretty accessory, just like earrings, necklaces, and bracelets and should be worn based on personal preference.

Worn by brides and an identifier of marital status and/or affluence.

The nose ring did not originate in India but was brought to the region by the Mughal Emperors.

Stop trying to label my marital status! Not even indigenous to India, so why complain?

Sacred Hindu symbol that is the representation of the Holy Hindu trinity of Gods.

Anyone who wants to embrace the Om symbol should. The Om is not meant to be policed.

Are all Indian Om-wearers really keeping the true sense of the Om close to their heart at all times?

[Read Related: ‘Fuller House’ Goes Full-On Bollywood and Here’s Why I Loved it]

All in all, I believe, defining cultural appropriation with the term “borrowing” is bogus. Borrowing is inevitable when multiple cultures co-exist. Do we borrow accurately? Of course not. Can we all be a bit more conscious of understanding each other beyond surface level fashion, music and pop culture trends? Of course, we can.

But to expect cultures to remain intact and niched without being compromised is the exact opposite of progress and growth. It goes against the multicultural buzz we all readily embrace.

Compartmentalizing South Asain culture as one not to be touched by “others” is counter to the diasporic nature of who we are.

The views and opinions expressed in this article are those of the author and do not necessarily reflect the views of Brown Girl Magazine. If you would like to submit an opinion piece, email staff@0mq.349.myftpupload.com. 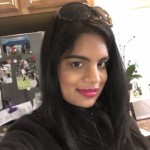 Theresa Mohabir is a self-proclaimed extroverted-introvert who can happily chat for hours in any social setting, but needs quiet time to reboot, She always has a mini notepad and pen in hand, evidence of her love of words and always needing to jot down ideas. Theresa has been blogging for over 10 years on topics ranging from dating, exploring her identify and the struggle of embracing the best of both cultures that she’s submerged in.