This post was originally published on Saalt.org and republished here with the author’s permission.

Growing up with white supremacy’s ideology of beauty that brown was not beautiful—that brown needed to be lightened—was a burden I carried for years. Although  I was “light for a South Asian,” I was never light enough. I was told to stay away from the sun, avoid the beach, try products like Fair and Lovely, or simply try anything that could make me lighter, and do anything that could make me more beautiful. Beauty over intelligence was emphasized as if all I could attain to as a South Asian woman was to be a good light-skinned housewife.

Often mistaken for not being fully South Asian—I was told to take pride in this feature. To be glad I could pass as bi-racial—to be honored to be considered even partially white. When people called my house and heard my mother’s slight British accent they assumed she was white—as if a brown woman could not be educated in a foreign country—as if a Brown woman could not speak English “properly.”

This past year, I had the opportunity to attend South Asian Americans Leading Together’s (SAALT) Young Leaders Institute (YLI) in Washington, D.C., on addressing and confronting anti-black racism within the South Asian-American community. Saying the program changed my life is an understatement. It changed me. YLI allowed me to meet and interact with fellow South Asians, whom I could expand my understanding and knowledge of racial justice. We spoke about structural racism, how it affects our ideology, the impact it still has on not only our culture but our people and how we can go about combating racism internally. Finally, being able to bring light to the colonial ideology still present in our culture and background was refreshing.  Although I attend school in a diverse and South Asian community, issues of South Asian colorism and white supremacy were never spoken about, but YLI gave me the courage to break this silence.

Participating in YLI’s workshops allowed me to become more aware of issues faced by our community. Learning about the history of oppression and racism allowed me to step back from the struggles we faced as South Asians and acknowledge the benefits we had over others, specifically the black community. I realized how anti-blackness took presence in my life. How we as South Asians often benefited from it. How we often add to the fuel by blaming one whole race for actions resulting from hate and cruelty by white supremacy. 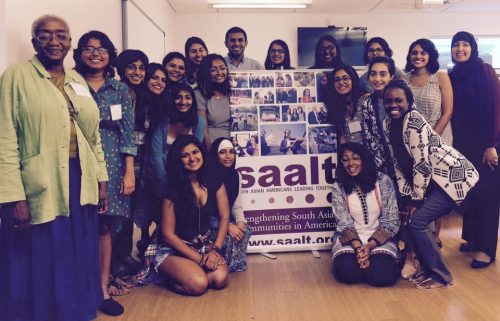 As South Asians, we benefit from anti-blackness. The fault is often taken away from us and given to those who are darker. We pride ourselves in being the ‘smarter’ race, the more ‘cultured’ race, the race closer to ‘beauty’. We often categorize a whole race for being violent and develop fear instead of realizing that we too are often stereotyped into one category from the actions of some. We fuel anti-blackness by depicting ourselves as the better race and taking pride in our lighter skin.

While accepting our color, race, culture for what it is, we should not look down on others because there are racist and oppressive forces impacting them in ways that does not impact us. We embody the model minority myth that is built on the pillars of anti-blackness. We benefit from anti-blackness because it allows us to not be the target. We participate in it by condemning dark skin by allowing anti-blackness to continue internally within our communities. We are not succeeding by conforming this way of thinking but instead failing ourselves by strengthening and empowering white supremacy.

We are privileged because while we stand in solidarity, while we are outraged from police brutality against black people we do not feel afraid. We are able to show our presence, we are able to voice ourselves, condemn racial injustice because we do not have to fear to become the next victim. We, as South Asians, need to realize we have both benefited from anti-blackness and have gained from the struggles of black people.

We fail to see this ideology only hurts our youth, only weakens our people. It only causes us to hate ourselves for the qualities we should love-hate the skin color that defines us- the skin that makes us beautiful. Though we are no longer under the rule of the British, while we now have our land, we still are under the influence of white supremacy. That while they may no longer occupy our land—they occupy our minds.

How can brown be beautiful if white has always ruled over brown?

How can brown be beautiful if it is close to black?

[Read Related:  Rising Above Anti-Blackness in the South Asian Community]

As South Asians—specifically as South Asian youth, we have a duty. We have a duty to unpack and unlearn these ideologies and while it will not happen overnight and will take time—it is possible. YLI allowed me to gain the courage to speak up against issues I felt strongly about. It allowed me to understand the negative impact white supremacy has on our cultural ideology of beauty informed by anti-blackness. Through YLI I gained not only a family of support but comrades to empower me through my journey of unlearning the anti-blackness I grew up with.