We Are no Strangers to Guns

The following post is a reflection piece written after last week’s deadly ambush that took the life of five police officers in Dallas, Texas, by 25-year-old Micah Johnson.

In 1979, my Sindhi grandfather decided to move to Dallas, Texas. He took his Persian wife by the hand, along with their five children, and left everything they had in Dubai. They were part of the first wave of South Asian immigrants to enter the South. My father was one of those five children—a pioneer. He has had a gun put to his head enough times to recall the feeling of the metal with zero hesitation. He saw his father, the one who crossed Europe and the Atlantic to get him here, shot dead on the floor of their Dallas gas station twenty years after he had forced this country to be home. We are no strangers to guns.

In 1979, my mother was happily walking around the streets of Tehran, Iran, in a pair of shorts and a tight t-shirt, only to hear radios blare news of a political uprising. The revolution was upon them. Her father refused to leave—refused to run to India even though his Marathi wife pleaded. He was too proud a Persian. They stayed. My mother swapped her shorts for a kaftan and head scarf out of necessity. She’s heard guns go off and seen bombs explode. But that could not cure her of her vigor for life. She has walked up to police officers dawning machine guns, just so they could notice her green mascara and pink lip gloss. We are no strangers to guns.

In 2001, my brother was playing outside of our small apartment in Mesquite, Texas. He was six. He was unaware of his big Persian eyes and strong Sindhi nose. He was also unaware of the man standing behind him pointing a handgun at his small frame. He turned around to hear the man pull the trigger back. In what he describes as one of his first real memories—he recalls my dad opening the door just in time for that man to run off. We are no strangers to guns.

In 2013, I was working my first job at Old Navy, in the Texas suburb of Plano. As lead cashier on a slow weeknight, I end up checking out every customer. A man walks up and throws two pairs of boys jeans down on the cash rap. They’re for his son, he said. I could not stop looking at the holster on his belt. He noticed my eyes on his weapon along with my thick eyebrows and the clearly ethnic name on my badge. He says nothing the rest of the transaction. We are no strangers to guns.

As easy as it is for me to say I am from Sindh, Pune, and Tehran, as easy as it is to put on payal and scream to the “Bajirao Mastani” soundtrack in my car—I cannot forget I drive on Texas highways. I always have. These roads are my veins. This land is my home. And I have come to the strange realization that the decision of my forefathers to make this place my home may have been incorrect. I am too young to sit my parents down and tell them that all the bullets they’ve literally faced were for close to nothing—as all over this country immigrants and people of color are still facing them. They came to this country so I would be a stranger to guns. Yet here I am, here many of us are, repeating the history they did their best to leave behind.

I do not hold the optimism of a Bollywood movie; I hold the realism of a young woman raised in the dirty South by two resilient parents. We are not a house divided. We are a declining regime. An implosion from the inside, often led by the sound of a semi-automatic being fired or the sorrier excuse of a body cam being turned off. Dallas; my city, my very veins, has proved something unprecedented is occurring in America. Still too organized to be called anarchy, far too sporadic to be considered total war—yet it is far from any kind of social homeostasis. Our own bigotry and complacency as engineered a state of fear. And as the line between arrogance and pride is thin, thinner is the line between revolution and chaos.

This issue has many facets. It screams Black Lives Matters. It weeps for police reform. It begs, violently, for some sort of logical explanation when a number of dead bodies the issue has produced prove there is no such explanation. I can only say, that collectively, as one America, we are no strangers to guns; and with all my passion, I wish we were. 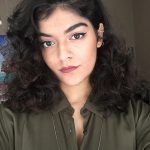 Suraiya Ali is a desi/Persian artist, writer, and novice theologian from Dallas, Texas, currently studying in LA. She truly wishes she could have fought by Hector during the Trojan war and has seen Bajirao Mastani 10+ times.