While I lived in Mumbai for four months to conduct ethnographic field research, I experienced catcalls, rude comments and the ever-present male gaze.

Although I traveled to Andhra Pradesh and Madhya Pradesh via trains and airplanes, it was in Mumbai that I had the most uncomfortable experience. I’d like to evoke what I call, “the scowl” or at college sometimes what we called, “the frat face” – which all my female friends understand and some of my male friends find to be “uninviting.” During my stay in Mumbai, I lived with a multinational and multi-ethnic group of women, of which I was the only Indian woman. Walking alone at night was much more uncomfortable when I was not with my roommates. When we all walked down Carter Road in the evening or went grocery shopping, I almost felt protected – I could laugh and joke around, and wear whatever I wanted to because I wasn’t the focus of anyone’s attention. They were.

But walking alone was a completely different story. I am 100 percent Indian. There is no doubt that I can look the part, but it seems that I can’t play it very well. For those of us who are either American-born Indians or have grown up in America from a young age, we all understand how our NRI status is plastered across our face in invisible letters. It’s something in the way we walk; carry ourselves, our glazed American-Indian accents – things that can’t be hidden by a salwaar or speaking in our mother tongues.

One specific moment I remember was walking to my uncle’s birthday party in Bandra. As is typical of me, I have no sense of direction, so I found myself slightly lost. It was only 9 p.m. or so in the evening, which is normal in the states, so I wasn’t concerned or uncomfortable until I began to feel the gaze of every passer-by man and sometimes a woman. It’s funny because the women would seem concerned, but unsure if they should say something. Because why would a 20-year-old female be walking around alone at 9 p.m. The men, well, their gaze left little to the imagination.

Later, when I told my mom, she asked me why I didn’t travel via a rickshaw. The thought had crossed my mind, but when a rickshaw started following me, not leaving when I said “I didn’t want one,” – I had no intention of getting in alone into a speeding vehicle with a strange man.

As the rickshaw driver sped away, he yelled out, “Why are you scowling, pretty little thing, like you?” 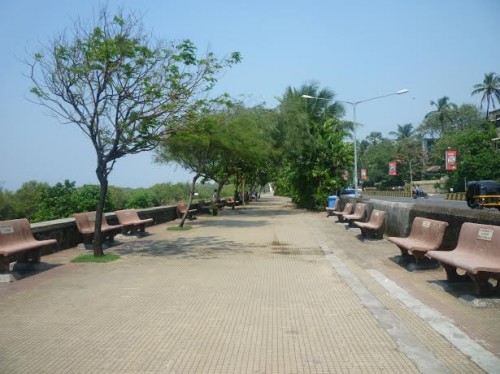 Especially while traveling on trains in India, I found that a smile was not just a smile to some men. Even while you travel to the local grocery story or a party or even to work – you don’t have time or energy to discern if your “smile” will get you into trouble.  So you scowl, or walk around with the “foreign-looking” people, since apparently you can’t pass for a local either, and you learn to keep scowling so that you won’t feel as if you  “invited anyone” to speak to you, brush past you or make comments to you. Because as much as you want to stand up for the injustice of having to feel that way, in the moment, the biology of that “fight-or-flight” mechanism is what usually wins.

After experiencing the eye-ogling and disgusting comments in Mumbai, I find that the “scowl” has just become second nature over the years. It’s a way of deflecting, gearing yourself up, protecting yourself mentally when you suddenly feel physically powerless.

Vaidehi Mujumdar is an aspiring physician, writer, and researcher based in Washington DC. She’s a contributing writer for India.com’s US Edition. Her work has been published in The Guardian, The Feminist Wire, Media Diversified, and others. See more of Vaidehi’s work on her website.

The Past, Present And Future Of Women