Aziz Ansari vs. Kunal Nayyar: Is Using an Indian Accent Insulting or Patriotic?

From the audience’s perspective, Aziz Ansari and Kunal Nayyar might seem to have a lot in common as successful Indian entertainers who have a won the hearts of many across the globe. So, what exactly makes them so incredibly different? The answer may seem small, simple, or even amusing—but when it comes to using an Indian accent in roles, the two stars have very different views.

Ansari recently created and starred in the new Netflix series, “Master of None,” mainly because he was not being cast for any interesting roles. In the show’s second episode, “Indians on TV,” we find out many reasons why his show’s alter ego, Dev, refuse to use an Indian accent for any role—a stance that the 32-year-old comedian shares in real life. Dev refers back to his childhood, recalling the moment when he first saw an Indian character in the 1988 Hollywood movie, “Short Circuit 2.”

The Indian scientist in the film, Benjamin Jarhvi, left a lasting impact in Ansari’s life. But it wasn’t until he was older that he realized Indian characters were rarely seen outside of their stereotypes, such as driving cabs or working at a gas station. Disappointment struck during Ansari’s time in college. The man he had idolized for so long as Benjamin Jarhvi was played by a man named Fisher Stevens. Ansari was shocked to learn Benjamin was not even played by an Indian man.

Ansari recently spoke to Stevens on the phone for a piece he wrote for The New York Times on November 10.

“Seeing an Indian character in a lead role had a powerful effect on me, but it was only as I got older that I realized what an anomaly it was. I rarely saw any Indians on TV or film, except for brief appearances as a cabdriver or a convenience store worker literally servicing white characters who were off to more interesting adventures. This made ‘Short Circuit 2’ special. An Indian lead character? With a Caucasian love interest? In the 1980s? What’s going on here? A bold foray into diversity far ahead of its time?

From practicing the art of yoga to reading books such as “Siddhartha,” to living in India for a month, it was very apparent that Stevens was respectful of the culture, and took playing an Indian character seriously. Hearing about this was a nice surprise to Ansari, especially since the movie was shot during a culturally insensitive time.

“Mr. Stevens’s efforts to make the character real, and not a full-on ethnic cartoon, are admirable, despite the underlying insult of his being cast,” Ansari wrote. “Toward the end of the conversation, it seemed to fully hit him how insensitive his casting may have been, and he said several times that he believed the role should have been played by an Indian and that he would never take it today.”

But maybe the time of such indifference has still not passed. Even though there are influential, successful, and famous Indians in the United States, Ansari pointed out that there are still Indian characters who aren’t being played by Indians. With a growing pool of people perfectly capable of playing these parts, it’s heartbreaking to the comedian that Indian actors are, at times, recognized by their accents and instead of their acting abilities.

Despite his strong views, Ansari completely understands that “sometimes you’re in a jam,” and playing a big role is rewarding when it comes to the money behind it. Yet, because of these views, Ansari refuses to do an accent for any of his roles.

On the other hand, Nayyar has a different approach. In his newly published book, “Yes, My Accent Is Real,” the star of “The Big Bang Theory” titled one of the chapters, “Why Being Indian is Cool.“ He starts off by referring to India as not being a nation of “cool.” He immediately follows up by saying that the country is not entirely useless and is good for things such as engineering, medicine, and spicy food. Nonetheless, he never forgets to express love for his Indian heritage to the reader.

Nayyar’s first audition with his first agency was for a new show—that show turned out to be the now highly successful, “The Big Bang Theory.” Nayyar shared that he fell in love with the script as soon as he read it, but what most people do not know is that the role he was auditioning for did not require a specific ethnicity. In fact, the original name for the character was David Koothrappali, not Raj.

As Nayyar dove into learning about the character David, he began to break it down starting with his voice. Even though Koothrappali sounded like an Indian name, the script made no particular ethnic distinction—so the actor decided to use this to his advantage. As played by Nayyar, David now sounded like a man who was raised in India and came to America later in life (just as he himself had done). The casting directors loved Nayyar’s rendition, and soon, David Koothrappali became the adorably dorky Indian astrophysicist we now know as Raj Koothrappali.

Though the character Raj does receive a lot of criticism for being a stereotypical Indian guy at an American university, Nayyar himself believes that Raj does not fall under the category. In an interview with Times of India, Nayyar explained:

“I’ve lost count of the number of times I’ve had to tell people that my pure Delhi, St. Columba’s School accent is the real deal, not something I consciously practice to sound more ‘Indian’ or to make fun of Indian accents—like, say, the Apu character in ‘The Simpsons.’”

He goes on to explain that this is the only thing he has not lost since moving to the United States. Nayyar’s opinion about using his accent is an honest one and is something he is not ashamed of.

Ansari and Nayyar clearly have opposite takes on using Indian accents, but the reasoning behind each of their views are strong. After reading Nayyar’s book and watching countless interviews with Ansari, I realized that when you look at the bigger picture, the two Indian-American actors have an important trait common, one that goes beyond using accents. That is, never losing sight of where you came from, and embracing your culture for all that it is—even if that is difficult at times.

Ansari did not grow up in India, but that never prevented the actor from keeping in touch with his roots and loving the traditions from his homeland. Nayyar, who was raised in Delhi, writes about celebrating Diwali at home with his wife in Los Angeles, even referring to the holiday as:

Ansari and Nayyar are two successful, Indian, comedic actors who are proof that a person can hold onto where they are from in a foreign country even with the hardships that come along with it. That, on its own, is a reason to respect them. 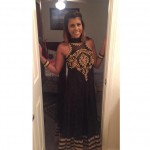 Archana Singh is a third year journalism student based in Florida. She has a passion for learning about religion and American History. She also might have an ever growing obsession with all things Bollywood. Her favorite books vary from famous biographies to the Harry Potter series. Follow her on Twitter @ArrrchuD2.