Trials and Errors of Being Muslim and Celebrating Halloween

Each year, Halloween is a reminder to me of all the things I don’t have. 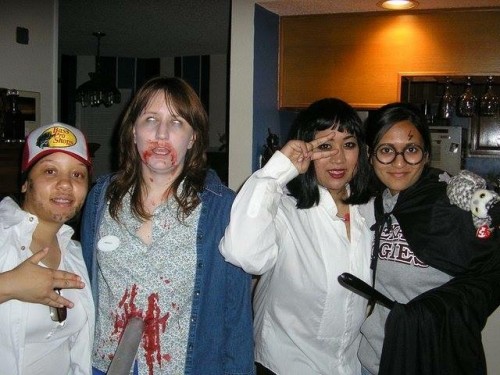 Ya’ll, I threw a cape over my alum hoodie and called it a great Harry Potter costume.[Photo Source/Nishi Fatima]

But in my childhood, Halloween would especially remind me of not having a dad who was “cool” enough to let us trick or treat. From the ages of 5-12, it was a deep feeling of lacking.

So I guess you could say that Halloween left me feeling, well, hollow.

Our dad was a conservative Muslim who thought that Halloween and everything related to it was a gigantic middle finger to our religion.

You would think that at least the free candy aspect of it would be okay with him given that it was, you know FREE, and he usually would jump for joy at free things. Sure, free donut samples at a gas station in the sketchiest corner of Houston was okay, but talk about taking accepting Halloween candy from neighbors that we had known for years and it was all “Astahgfirullah!” this, and “Losing our culture!” that.

There’s also the fact that Halloween is not cheap, and desi parents would never ever spend $50 on a Halloween costume, especially ones for their fifth grader who would grow out of the outfit by the end of the year, or in my tall sister’s case, the end of the night.

This was paramount to my social standing at school, because I was already the weird brown kid in 1990s Chicago suburbia ,who didn’t eat pepperoni, had parents who (per my classmates) sounded “funny,” and always brought off brand Fruit-Roll Ups aka “Fruity Juice Papers” to lunch.

In my attempt to avoid becoming a total social pariah, I would try to come up with artful ways to dress up without my parents realizing. One year, I convinced my mom to let me wear a blue salwar khameez to school and tried to tell everyone I was Princess Jasmine.

Except all the girls in my class cornered me and made it very clear that:

1) It wasn’t the right shade of blue and 2) It could never be a *TRUE* Jasmine costume without the head piece, duh.

Another time I wrapped a bunch of toilet paper around my arms and neck, claiming to be a Mummy. This short-lived glory came to an end after first period, when our fourth grade teacher announced we had run out of toilet paper, causing the whole class to stare at me with beady, accusing eyes. I”ll never forget that day, as I realized that toilet paper isn’t quite the infinite commodity that my 7-year-old self thought it was.

The situation was getting desperate with each passing year. The older I got, the more elaborate my class mates costumes would be, and the more I would stand out as the only one in everyday J.C. Penny attire. Adding insult to injury was the fact that there were plenty of people from our masjid who did dress up for Halloween, even if it was just to take advantage of free candy. But this actually ended up working in my favor, as one year my mom borrowed a dollar store witch hat from a masjid aunty to help me fashion what I thought would be the whole school’s BEST Halloween costume.

After hours of cajoling my Dad to let me dress up, Mom and I set about creating my extremely excellent costume. She tied a black dupatta around my shoulders, smudged some dark eyeshadow on my cheeks, and put a bit of kajal on my eyes. It was the first time I was wearing makeup AND the first time I was in a proper costume for Halloween, my 10-year-old self was thrilled.

I just knew this would win me so many points with all the kids. For me, it was the costume to end all other costumes, given all the blood, sweat, and drama that went into making it happen.

But when I got to school, I didn’t get the response I had hoped for.

“That’s not a real witch cape.”

“How come you don’t have a broom? What kind of witch are you?”

I was surprised and depressed. Was there anything I could do that would let me be accepted by these kids? Why did my parents have to insist on making us live on the fringe of popular culture? Why was my 10 year old life so hard?

But then I had an idea. I didn’t like to tout my differences, but desperate times called for desperate measures.

I walked up to the kids who had been making fun of me and offered the following asinine threat:

My soul cringed. But if they were going to “other” me anyway, I was going to take advantage of it.

“Oh yeah? what kind of spells?” one of the girls said.

I hadn’t thought this plan through.

“My uncle went to India and couldn’t stop pooping water for a week. That kind of spell?” another one of the school yard bullies chimed in before I could say anything stupid-er.

For extra dramatic effect, I recited  the lyrics from “Baazigar” just to let them know I wasn’t effing around. Of course, they took this as me reciting a spell, and were totally freaked out.

So, while I didn’t become any more popular, I did at least find a way to scare the other kids. If I couldn’t be loved, then at least I could be feared.

And really, isn’t that the point of Halloween anyway?