The Time my Life Became as Dramatic as a Bollywood Movie

This post was originally published on Medium.com and is republished with permission.

The typical Bollywood movie usually incorporates three main aspects: The love story, song and dance, and some off the wall dramatization of societal norms in the culture. Well, at least for me, I thought it was off the wall. I never once thought that these point of views were reflected in my own immediate family.

I was born in Brooklyn, NY, and grew up in Florida (I know, bless my heart). Both of my parents are immigrants from Guyana, who met each other in New York. My childhood was, for the most part, normal. My parents did their best to acclimate us to the norms of American society while instilling cultural and moral values. I always felt like I had a good balance between what was outside of my home and what went on in my home.

Of course I would get the occasional ignorant remark such as:

The funny thing about these children is that they grow up to be the same ones appropriating the culture, but I digress. I never let the ignorance bother me too much. I always knew that although my parents were super Indian, they were also American citizens and the westernized culture had seeped into our way of life, whether we liked it or even acknowledged it.

It was not until I started to get older did I realize how much of what I saw in Bollywood movies was reality for young daughters. Sons got away with murder (literally), but daughters were held to such a high standard that even the wrong outfit could “shame” the family. I was blind to the ideology. I thought to myself, my parents would never try to control my life like that. We were American, we were civil, we were understanding and we were free to express ourselves.

Oh boy, was I wrong.

About a year ago, as my biological clock was ticking away, my parents proposed the idea of me meeting a family friend. They said he was an environmental scientist, handsome, and was the son of a good friend of my father, therefore he “came from a good family.” That’s a major factor; you had to make sure your match was from a good family. You couldn’t have any surprises popping up in the genealogy. At first I was reluctant, but then I thought “what the hell?” I would get a free trip to New York to meet this guy, and maybe even hit it off with him, so what did I have to lose?

Let me spare you the details of the trip, but let’s just say it was a tragedy. The guy was an atheist, he was an arrogant asshole, and felt as though he could speak down to people due to their educational background. I was immediately turned off. My father, however, was disappointed and could not understand why I would pass up such a great “option.” I was even more mortified at this.

Here I am thinking my parents just want the best for me, and will support me no matter what, and they’re trying to plot my life. I could not believe it. How could I have been so naive? How could I have thought that my life was different? I was not budging, and I would not settle for marrying someone despite my age (I’ll be 30 in August, which in Indian years is 67).

I walked away with some valuable lessons that weekend. I realized my parents are stuck in their traditions and it’s not their fault. I also realized that I had to live my life for myself. Even though they think my career choices are extracurricular activities (and my choices in men are even worse) I cannot continue to live my life for them. I have to grow up eventually, and that’s something that they will probably never understand. 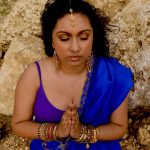 Veda Chand is a freelance writer born in Brooklyn, New York, whose parents are from Guyana. She grew up in South Florida where the Indian and West Indian community is extensive, however, she never could quite find her placement. She became a writer because she felt her perspective was one that could be relevant to other young, Indian women who were raised in the States. While she considers herself American, her Indian roots are undeniable.

Female Genital Cutting: A Continuing Tradition That Needs to End