‘The Mindy Project’ Recap: ‘Confessions of a Catho-holic’ And ‘What to Expect When You’re Expanding’

If you haven’t seen the last two episodes in season three’s “The Mindy Project,” then you are once again in luck. Here’s what happened on the most recent episodes of the hit FOX show, right in time for tonight’s season finale, airing at 9:30 p.m.

Season 3 Episode 19: “Confessions of a Catho-holic” 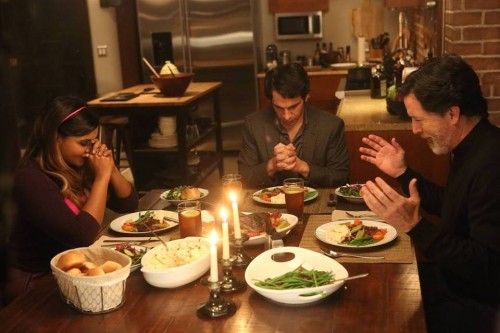 What does Danny love as much as he loves Mindy? Catholicism.

Episode 19 will have you laughing out loud from the start and kicks off with Danny confessing his sins to his long-time priest, Father Francis. And to his horror, Father Francis dies right there in the confession booth.

When Mindy and Danny go to the memorial for the priest, Danny is shocked to see his replacement, Father Michael O’Donnell, played by “Late Show” host Stephen Colbert, who bullied Danny as a child. Additionally, they are shocked to hear his sermon’s takeaway point: “Sometimes it’s the small sins that tarnish the soul the most. I’m talking about birth control, cohabitating before marriage, and dating outside of the faith.”

At this point, and almost predictably so, Danny’s guilt explodes since he committed all of these sins with Mindy. Feeling the pressure of his deeds, Danny lies and tells Father Michael that Mindy is Catholic, even though she is a Hindu. And Mindy, in her love for Danny, goes along with the ruse. She invites Father Michael to have dinner with them, and puts her best effort forward to seem as Catholic as possible with comical results, including Morgan texting Mindy verses from the Bible.

By the end of dinner, Father Michael is convinced Mindy is a charming and devoted Catholic woman. Everything is running smoothly until Father Michael needs to use the restroom, at which point Mindy realizes that she left condoms in the bathroom medicine cabinet.

Of course, her solution is both radical and hilarious. She decides to go to the bathroom to quickly grab the condoms before Father Michael sees it and realizes that Danny and Mindy have had pre-marital sex. Surprisingly, she is successful and leaves the bathroom unscathed.

Later on, however, Father Michael notices the ultrasound picture on Danny’s laptop. And instead of lying, Danny chooses to come clean and reveals that Mindy is not Catholic, they are having a baby and more importantly he does not feel guilty about any of it!

Before the situation produces any more hell-fire, Mindy announces to Father Michael that she has decided to raise the baby as a Catholic. With this news, Father Michael is pleased and assures Danny that they can sort things out.

Season 3 Episode 20: “What to Expect When You’re Expanding” 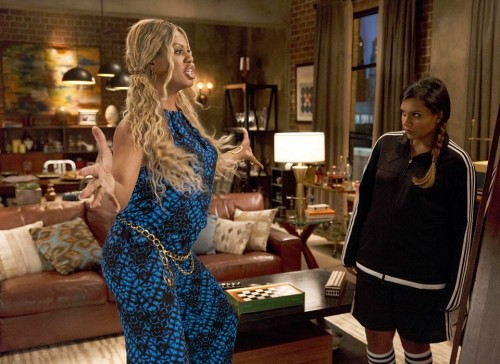 Episode 20 is the second to last episode of this season’s “The Mindy Project” and it is full of relationship whirlwinds, but could we expect anything less?

We find out that Peter and Lauren are getting married, which comes as a complete shock. Wasn’t he just stalking her?

Jeremy finds a new potential love interest, played by actress Cristin Milioti, who played Tracy McConnell, better known as The Mother from “How I Met Your Mother.”

The bulk of this episode focuses on Mindy’s self-confidence crisis since she has gained weight due to her pregnancy, and even though Danny tells her she is beautiful, Mindy is not feeling it.

Sheena, according to Tamra, is an amazing fashion stylist. She also delivers several brilliant one-liners of wisdom that are undeniably true as she starts to coach Mindy on how to feel more confident in her own skin.

One of the greatest scenes in this episode is when Sheena asks Mindy if she would say any of the mean things she said to herself to her best friend. Then she tells Mindy, “You are your own best friend.” (Not going to lie, I got a few goosebumps during this part.)

Sheena’s wise words were particularly striking because like many other girls, I too am guilty of sometimes being overly critical and harsh on myself when it comes to personal body image.

Why do we call ourselves ugly when we would never call our good friends by the same term? This episode comically shed light on how important self-respect and self-confidence truly are.

While Mindy and Sheena are having their moment, Morgan discovers that his girlfriend Jessica, played by the talented Julie Stiles, wants to break up with him because he has gained weight.

Once Mindy hears this, she becomes enraged and immediately heads over to Jessica’s apartment to tell her she has no right to fat-shame Morgan, and that although, he may never be perfect, he is still beautiful and strong.

And then BOOM! Mindy realizes that this philosophy also applies to her own situation.

When she gets home, Danny tells her sincerely that what he loves most about her is her self-confidence!

[Read Related: “The Mindy Project” Recap “No More Mr. Noishe Guy” And “Dinner At The Castellanos”]

“What are we waiting for? I got something bleached for this!” – Beverly

“’I don’t have a Catholic bone in my body, except yours!” – Mindy

“It ended like every love letter I’ve wrote, with the authorities being called” – Jeremy

“How would you like it if I had a podcast about our sex life? Because I do have one. For the past 6 months.” – Mindy

“How old was Father Francis? Was he Jesus’ roommate?”- Mindy

Book Review: ‘The Paths of Marriage’ by Mala Kumar