As an Indian-American, I always find that hearing about a Hollywood film that features a strong Indian presence gives me a combination of excitement and unease. I feel excitement, because, of course, I am eager for the representation of my culture on the silver screen. I become uneasy, because representations can go wildly wrong and fall into a series of tropes that have very real consequences for South Asians living in America.

Thus, I made a strong effort to go see “The Hundred-Foot Journey” with an open and neutral mind. Directed by Lasse Hallstorm (“Safe Haven,” “Salmon Fishing in the Yemen”), the film is based upon a novel of the same name by Richard C. Morais.

The film begins centered around the Kadam family with a patriarch, who mainly goes by Papa (Om Puri) and matriarch played by Juhi Chawla. The family runs a successful restaurant in Mumbai where the star chef is one of the Kadam sons, Hassan, played by Manish Dayal (“Outsourced”). Tragedy befalls the family and the restaurant one night when a group of violent rioters enter and wreak havoc, leaving the restaurant and mama Kadam engulfed in flames.

The family leaves India and eventually finds themselves in a quaint town in the south of France, where they open up an Indian restaurant across the street from a Michelin-starred restaurant owned by Madame Mallory (Helen Mirren).

Naturally, this leads to fierce competition between the two restaurants, one representing elite French culinary traditions and the other demonstrating determination and hard work of the underdog immigrants with a deep passion. The film focuses particularly on Hassan’s journey, whose love of cooking is much in part due to his special relationship with his mother.

The film can be praised because it is not quintessentially cliché. “The Hundred-Foot Journey” does not extend far enough to be characterized completely as an immigration film, a cooking film, a mixing of cultures film, or a romance film. It has a little bit of everything. This is beneficial because it does have the potential to simply go in any one of those directions and become a sappy, stereotypical genre piece. Yet, ironically, this is the film’s downfall, as well.

“The Hundred-Foot Journey” falters by traveling in multiple directions, leaving you slightly unsatisfied with each one. Characters and story lines are not fully fleshed out and about two-thirds of the way into the film I have multiple questions lingering on aspects of the film I was introduced to earlier. The film twists rapidly and my mind is kept guessing if its main message is going to be about the clashing of cultures, about abandoning roots, or about prioritizing career over everything else.

Of course, not having a predictable story line is always good, but “The Hundred-Foot Journey” lacks consistency making it unpredictability frustrating. I suppose if I look back on the entire film I can retrace the steps so that I find a more continuous story line, but that’s not an experience I want to have. That’s just me really trying to defend the film because its intentions were good.

“The Hundred-Foot Journey” deserves this defense because, as previously mentioned, its resistance to fall into any categorical traps is commendable. The film has other strengths, Om Puri and Helen Mirren both meet expectations as cinematic legends. Manish Dayal plays the role of the naïve yet talented and diligent cooking prodigy well. He also happens to be my new celebrity crush. A.R Rahman’s score, as expected, is delightful. 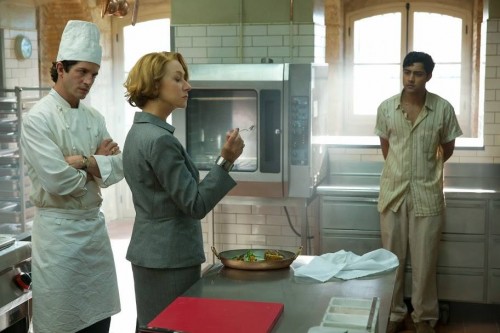 For us South-Asian Americans, “The Hundred-Foot Journey” also provides moments of humor in the distinct desi-flavored interactions and Hindi dialogue. There were multiple moments that only the desis in the theater were laughing as if it was a special inside joke between all of us. Seeing certain cultural habits and mindsets portrayed appropriately in a Hollywood film was a unique and meaningful experience.

Finally, it was a tremendous relief to see that the film did not employ preconceived Western misconceptions regarding Indians, but rather recognized these misconceptions and brought their humor and inaccuracy to light. When the Kadams open their restaurant in France they have trouble getting customers, so the head of the family decides to dress himself and his daughter in traditional Indian garb to attract Westerners by being “exotic.”

Later, upon reading a description of his son as coming from the gutter and achieving success, Mr. Kadam explodes. This small scene is powerful in preventing the film from turning into a “poor Indian boy rises out of his impoverished circumstances and makes it big in the wealthy West” narrative.

In this same scene Mr. Kadam sees a serious photo of his son and says, “He looks like a bloody terrorist.” With both these remarks, he destroys, in a poignant and comical way, stereotypes like the poverty of all Indians and terrorism associated with those with brown skin. Playing with Western stereotypes of South Asians in order to display their ludicrousness was incredibly refreshing.

While the film’s confusing narrative is a major and disappointing weakness, I would still recommend seeing “The Hundred-Foot Journey” for its acting, humor, cinematography, and uniqueness. The movie is a pleasant family film, which are difficult to find. You will not leave the theater thinking you wasted your time and money.

Saumya Bhutani is a recent graduate of Vassar College, where she majored in history and minored in biology. She wrote her thesis on the relationship between beauty ideals and the changing roles of women in India in the late 1970s. Saumya is an aspiring physician, but also considers herself a history aficionado and pop culture junkie.

You Have to Hear Asha Sing’s New Single ‘Satellite’

You Have to Hear Asha Sing's New Single 'Satellite'