“Fifty Shades of Grey” was supposed to be the hottest movie of the year. It was a global phenomenon, and I had to find out why.

Before watching Sam Taylor-Johnson’s film, based on E. L. James’ novel, I was convinced it would be a load of bollocks; that it would highlight the anti-feminist narrative that women without autonomy are hot. I assumed it would perpetuate the age-old misogynistic interpretation of how a woman is supposed to be: ravished, dominated by a man, unable to hold her own, and loving it. In some ways, I was right. The film doesn’t have much depth, artistic merit, or amazing content. It’s a commercial product, and it sold. It sold really well. It was the pure commodification of sex.

The story is about a literature student, Anastasia Steele, whose life changes forever when she meets handsome, yet tormented, billionaire Christian Grey, played by Jamie Dornan. The majority of the film played into old age stereotypes.

The ending, however, was impressive. When Dakota Johnson as Anastasia Steele has reached the height of her “spanking” intolerance, she finds the strength within herself and leaves. She knows her limits, and she stands for them. She’s clear about what she wants and is unafraid to speak her truth. This is, of course, a powerful message for women everywhere.

But still, the movie was just painful to watch. Personally, I find the idea of mutually consensual submission to be a powerful one. Absolute surrender to a greater power or authority; trusting someone so much that you would bow your head before them and say “Whatever comes, I will allow”–that’s beautiful and spiritual. To be able to find that level of trust within oneself in a bondage situation, I’m sure it could be liberating.

But this movie took a beautiful idea of submission and perverted it. The thing that got me all “hot and bothered,” in a completely non–sexual way, was when Anastasia reveals her secret to Mr. Grey about being a virgin.

“Where have you been?” He growls, “Men must throw themselves at you.”

There it is. The biggest turn on for a man is a woman’s purity, her innocence, her sacred virginity. He is drooling on her at this point, unable to believe the gem of a “virgin” that he has found. A self-empowered woman who had explored her own sexuality and was making an active, self-educated choice to be submissive would just not be as hot.

As my dear father would say, “Beta, you don’t want to be smarter than your husband. You want him to always think that he is stronger and more intelligent. That is your job, sweetheart.” This idea is pervasive in traditional cultures. But clearly, it’s quite prevalent in the U.S. today.

And because I don’t live in a vacuum; because even as a deeply spiritual and self-aware feminist, I am shaped by the cultural pressures of my environment.

I have faked orgasms. I thought I was meant to have them, always. To show my partner that he was good, even when he wasn’t. Why? Because it’s been drilled into me that I am supposed to please my partner. I’m supposed to make him feel like a man. And in order to do that, I must act like a woman, a.k.a submissive.

Of course, you can be a feminist and choose submission, but it all depends on the context. If your cultural, ethnic, and sociopolitical context has empowered you to educate yourself, to build trust and self-confidence in your environment, then you’re in a position to make the choice to submit. But as women, we are still struggling to be liberated from this worldview. Women are supposed to be submissive; it’s a sexy sign of their femininity.

But this notion is dangerous. If that is how a woman is supposed to be, what happens if she is not?  If we live in a world where women are supposed to be submissive, doesn’t this then imply that we are doing something wrong when we are not submissive? That we should and could be punished for it? Doesn’t this perpetuate misogyny and violence against women?

The ideas in this movie are not just dangerous for women either. Men are also deeply degraded. Mr. Grey, the cold, uncaring, power-obsessed man, who has no interest in actual intimacy is the icon of masculinity, and it’s just the way he is. I’m so sick of how men are shown to have no sexual impulse control. Throughout the movie, Mr. Grey repeatedly says “this is just the way I am” and as a woman, and an audience, you just have to accept that.

When Ms. Steele asks if he’s going to make love to her, his response is “I don’t make love. I fuck. Hard.” He also repeatedly tells her, “That’s who I am, and I can’t and won’t change it.”

And isn’t this the common narrative that we see all the time? That this is what men are like: Put a woman in a skirt that strolls past a group of men, and they’ll look her up and down, they’ll pass comments, and they’ll slobber and drop their pizza all over themselves. They are pigeonholed into caricatures of themselves. We remove their ability to choose who they want to be.

Self-realization comes from an active choice to honor and respect oneself; empowerment can be found in the act of committing and submitting to a power greater than oneself, and sexual intimacy makes us both holy and human. But, consent is imperative. It’s also very elusive because it presupposes a system that provides the right to consent to all, equally. And we know that’s not the world we live in.

It’s not the movie that’s fucked. It’s how entrenched we are in these systems of patriarchy and capitalism, working together like two evil twins, and their incestuous lovechild: Patriarcapitalism.

This system has to create media that will reinforce the message of the system. The commodification of sex. In order for that commodification to be successful, there needs to be high demand for it from blind consumers of “traditional” sexual narratives. Men are strong, rich, assholes who are incapable of intimacy, and women are better when they are virgins. Our media feeds us a pornified reality in which women walk with dollar signs in their footprints and men wank while stalking them. This shit is just an extension of pornography, albeit it’s soft-core nature.

How can we make empowered choices when we don’t have the courage to be vulnerable enough to actually discover what we want, while we are caught in the frenzy of filling our cupboards with more shit and our lives with more meaningless propaganda?

Russel Brand sums it up quite nicely.

So, my friends and fellow consumers, I leave you with a commodity that will unravel your cultural narrative of needs, and maybe allow you to begin asking yourself what YOU want, and not what you are supposed to want. In the bedroom or otherwise. 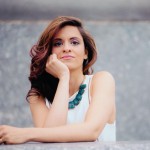 Nadia P Manzoor is a writer, performer, and producer. She is a cultural provocateur, a street dancer, a wise soul, and a goofball. She tells stories, through her one-woman show Burq Off, which has had sold out runs in NYC, LA, San Francisco, London, and Toronto, and through her web series Shugs & Fats. She wants to tell you stories. To make you laugh. And cry. And think. Follow her on Twitter @NadiaPManzoor.