‘Mostly Sunny’: The Sunny Leone Documentary That Will Leave You With Sunstroke

Sunny Leone is a fascinating figure. Born Karenjit Kaur Vohra, she has strategized, navigated, truly fought her way to where she is now, all whilst dealing with personal trauma, ostracization from her family and community, an almost constant struggle for acceptance in the mainstream, and owning all of her choices no matter how difficult, to become Sunny Leone.

All of this is fascinating stuff, but unfortunately for us, “Mostly Sunny” just does not dig deep enough.

It’s like we’re always on the surface level, just swimming in the shallows, but the shallows keep tossing us this way and that. We neither get deep enough to get to something real and raw, nor stay still long enough to fully focus on what’s happening. The director, Dilip Mehta (his sister, the award winning filmmaker, gets credited as a screenwriter on the film) takes us from one locale to another without cohesion to an idea or goal, and it gets confusing.

We see Sarnia, Ontario, Leone’s hometown (in a blizzard!), and her old house (her genuine excitement at being here was the best part); then we’re in India where the “crazy” (her words) amounts of attention she gets is astounding in such a socially conservative country where the censor board goes ham on most films that don’t meet certain standards of decency. From there we get the “silence” of Los Angeles, which Leone declares is “home” because her brother (who loves his sister, and has some great insights into their family dynamics) is there (and her two adorable dogs…she’s a pooper scooper folks), and then back to India. 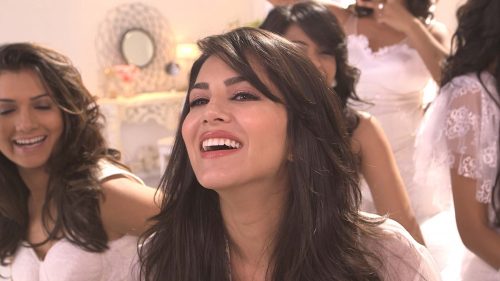 Why were they following around poor stressed out Hitesh (Leone’s personal costume designer) as he went on his dress fixing mission? What purpose did that serve? That little aside of his parents calling Leone their “Laxshmi” (Hindu goddess of wealth and prosperity) was interesting, but there was no examination of this either. 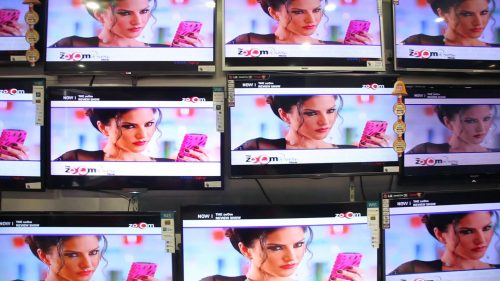 What was good? The interaction between Leone and her husband, Daniel Weber, was sweet. Their love for each other came through throughout the film. And business wise, they make a great team as well. Weber reveals this gem: “Sunny is a character to me, Karen is my wife…Sunny is a brand,” and Mehta does nothing with it!

Weber also discussed their new understanding of how “songs dictate the movies” and how this has impacted their strategy for Bollywood after Leone’s “Baby Doll” song became a super hit.

This seriously could’ve been a great angle to take— the couple’s mutual understanding of the importance of brand cultivation and sharp strategic planning—but Mehta didn’t take it.

Leone is also a likeable person. I like her. When she’s talking about her brother or her husband, her face lights up, and when she tells the story of her parents, it’s sad. She’s controlled, we never see her undone. She’s also a complicated person— how can she not be? She admits that she’s “living two separate lives…two separate names.” Maybe we only saw the life she wanted us to see?

Overall though, I think Mehta has done Leone and her story a disservice by keeping “Mostly Sunny” so bland. Not only does he not give his audience a look at the woman behind the star, he also fails in making the star interesting. I came out of this not knowing anymore about Leone than I already did.

Too many missed opportunities.

Why I Find Incredible Value in my Teaching Career

‘Because Dad Said So’: A Life-Changing Affirmation

'Because Dad Said So': A Life-Changing Affirmation