Growing up in Singapore, I was ashamed to be Indian. My complexion was darker than my friends. My features were distinctly different. My thick eyebrows and big eyes made me feel alienated. In school, my peers always made fun of how South Asian languages sound, often attempting to mimic an “Indian accent” because, apparently, it sounds hilarious. It made me angry when I heard racist jokes about dark skin color or about a Sikh man wearing a turban. My friends would make fun of Indian teachers in my school who would normally dress in a sari or chudithar. They would joke that the bindi is a record button because Indian women record everything you say.

My parents were born and raised in Singapore. They did not learn their own mother tongues at school. They took Malay as their second language instead, as did I. In Singapore, bilingualism is encouraged and enforced. However, Malay felt easier than taking an Indian language. Malay uses a highly phonetic Latin script, which meant no time was wasted in learning a new alphabet.

My paternal grandfather is a Hindu-Malayalee-Nair. His grandparents are from Kozhikode, also known as Calicut—a city in Kerala, India. He tells me fondly of how his grandparents’ villages were only one kilometer apart from each other. My father is able to converse in Malayalam. I remember how he would talk to my older relatives in Malayalam over the phone.

My maternal grandfather was a Sikh-Gujarati, who later converted to Catholicism after marriage. He spoke fluent Hindi, and everyone who knew him personally spoke very highly of him. My maternal grandmother is Tamil. Her family is from Chennai, formerly known as Madras, the capital city of Tamil Nadu, India. She can speak Tamil very well. My mother can understand Hindi, but is, unfortunately, unable to speak it. She can understand conversations briefly, but replies in English.

I went to an all-girls Catholic Convent school for 11 years. I was born a Hindu but Catholicism and its teachings held a very special place in my heart. I was influenced by the masses and bible verses that would take place and be read out in my school. Recently, while trying to strengthen my faith, I reconnected with Hinduism. It feels like getting in touch with a long lost friend. I have never been in a better place spiritually.

I always felt extremely ostracized in class. Everyone could speak Malay fluently because it was their mother tongue and was also spoken at home. I was picked on to answer questions all the time and it was very embarrassing when I would not know simple words in Malay. It feels tougher to be the odd one out when you are already a minority.

Additionally, as a dark-skinned Indian, it is difficult for people to believe when I say I am not just a South Indian and Hindi is my mother tongue as well. Despite the stereotypes, not all South Indians are dark skinned and not all North Indians are fair. My frustration with this false stereotype is one of the many reasons my friends—Anjali Rajan (aka anj_rajan),  Abbi (aka soIatenights), and Rachana (aka stargirllilac)—and I came up with the viral Twitter campaign, #SouthIndianAndProud.

ya girl reps her tamil & malayalee heritage in a pavadai #SouthIndianAndProud ? pic.twitter.com/veb22wMivj

I used to lie to people and tell them I have Eurasian and Portuguese blood because I thought that would make me popular. It was not the hardest thing to do with my name being so misleading. It was the easiest answer when people would ask why I had such a western name for an Indian. I would go on to say that my parents don’t embrace their heritage or culture either—they are westernized and don’t feel the need to preserve their heritage as much as I do now.

However, to get in touch with my roots, I will be paying for my own Kathak classes—something I have been wanting to learn for the longest time. I’ve also been watching videos on how to learn Hindi. I have Malayalam friends whom I can rely on if I ever need a English-Malayalam translation. My Tamilian boyfriend teaches me new Tamil words and more about Hinduism every day.

I will not allow anyone to deny me of my heritage. I am offended when people erase my ancestry or refuse to acknowledge it out of spite. To avoid being judged, I used to conform to their assumptions. I neglected and rejected what people do not believe I am. I have come to realize that even if others erase what you are, that does not mean you are not who you say. People have no right for you to prove anything to them. Enough is enough; I don’t care what people think. I know who I am. I’m being true to myself.

I’ve always felt like I have no identity. Maybe it’s because I was never taught my mother tongue and never celebrated traditional festivals. Maybe it’s because my family is full of different religions, ethnicities, and customs, which can feel amusing yet baffling. But I am searching for answers now.

I want to fill up the emptiness I feel and find out more about my culture, ancestry, and religion—something I’ve been sheltered from for so long. The journey towards finding out more about my roots has been a long and confusing one. However, it is one of the most magnificent trips I have taken. 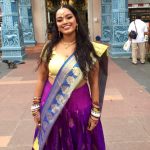 Tricia Ferdinandt is a Malayalee, Tamil and Gujarati girl born and raised in Singapore. She practices the Indian Classical art form, Kathak and cites Kangana Ranaut as her role model. When is not looking at art and sipping on chai (or working to pay the bills), she spends her time watching Indian films of many languages.

*The following piece was updated with the names of the #SouthIndianandProud co-creators on Friday, August 5.