‘Eighty-Four’: A Series of Poems That Bring Light to the 1984 Sikh Massacre

Processed with VSCO with f2 preset

The following series of poems, titled “Eighty-Four,” are based on the Sikh massacre that occurred Delhi during the winter of 1984 in response to the assassination of Indira Gandhi by her Sikh bodyguards. The author said she wrote them to create empathetic creative literature about this event. All photos are courtesy of Jasmine Kaur. 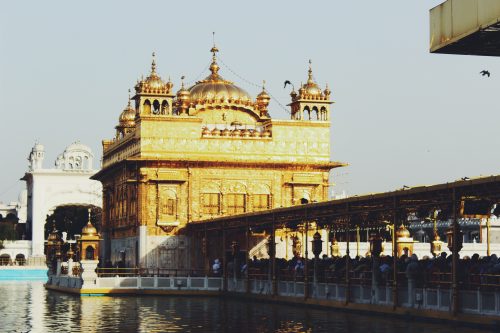 “The air smelled like fear,”
says my mother, her face
suddenly younger, as young
as the face that peered out
of the dried up water tank
in the middle of the night,
money tucked into the folds
of cloth that covered her in
layers and layers, more than
she could count – the Delhi
winters have always been
unkind, and the onset of that
year’s cold was marked by
more than just a chill that went
to the bones – scorched plastic
has a heady smell, mixed with
kerosene and blood, it smells
quite like death, and death it
saw, yards of wound cloth,
crimson red, stained darker with
fresh hues of anger, pain, and
loss, found itself thrown on the
ground, and off the heads of
those it adorned, but what was
most telling was the pin drop
silence of those who could help
for studied ignorance of anguish
is abetment unto itself, and
the silence that followed, was
the worst of all, because those
who survived, hoarse and scared,
had no voice to call their own.

She sat across the table, and
clutched at the ceramic in her
hand, spotted with age and grips,
the mug too large, and too at odds
with the narrow, bent fingers that
wrapped around it, just as she
was at odds with the world she inhabited.

Her hair was slicked back with the
smell of coconut, and it snaked down
her back, a narrow tale of the faith
that she fostered, and its signs were
there to see for those who noticed,
a flash of silver on her wrist, and the
little prayer book she clutched to her chest.

The colours she wore, hues of the plains
made her stand out, stark, against the
city of pastels she was living in, and her
skin, the colour of a wheat harvest, stood out
against the pale pinks and creams,
underlining, highlighting, demarcating
her tangible otherness, and vulnerability.

We spoke for a little while, and her voice
sounded hesitant, wrapping itself into
the language we shared in slow, careful
movements – her words flowed in a cacophony
of accents that chafed at each other’s very
existence – one she was born into, and one
she learned in order to survive her transitions.

“Why did you leave?” I asked, overriding my
own feelings of intrusion, flinching at my
own demand to unravel bandages she had
struggled to cover herself in, and she smiled,
resignation shading her eyes like the shade
of rainless clouds over dusty land, one that
she had left, afraid and circumspect.

“This isn’t your home.” I said, surprised at
my own boldness (I don’t often try to
shock someone into revealing their most
hidden depths), and she sighed, softly,
and her face reminded me of lullabies
hummed to me through the evening fogs,
layers of wool, and winter smells.

“Will you have some more tea?” she asked,
as though my questions were irrelevant,
and in that moment, I knew they were,
because the home I spoke of, and the land
I lived on, had cut into her heart, cut deep
enough to cut itself out of what she
had left, of her identity, of herself.

The Portrait of a Man

My father’s silhouette is incomplete
without the shadow of his turban,
one I’ve seen him tie every day, often
twice, with careful, measured grace
filtering through his movements.

One corner of each of them is faded
by the smallest shade, holding teeth
marks from where he clenched at
the cloth, draping it around his neck,
across his forehead, and down again.

He does this slowly, calmly, standing
still, brows furrowed in concentration
till each fold mirrors the next, and he
pins them down, crisp overlappings
underlining a history he chooses to tell.

My earliest memories are of him as a
magician, tying impossibly long stretches
of colourful cloth into intricate knots,
looming over me as I saw him condensing
practice, faith, and culture into his impression.

But sometimes when I see him perform
his artful meditation honed to precision with
years of repetition, all I can think of is the
people who sobbed as they held scissors
to the most prominent expression of themselves.

I think of how they must’ve felt, as the throngs
fuelled by anger and bloodlust pressed against
the gates of their homes, voting lists in hand,
chasing down men who had, till then, carried
their turbans so proudly on their own heads.

I imagine the turmoil they faced, with the
choices they presented to themselves,
caught between faith and massacre,
the helplessness in the face of reckless,
unwarranted, unjustified executions.

I wonder if they look at their reflections
and see the faintest silhouettes of what
they were forced to give up, and give in,
and I imagine that the history that it signifies
isn’t a wound that heals, or forgives. 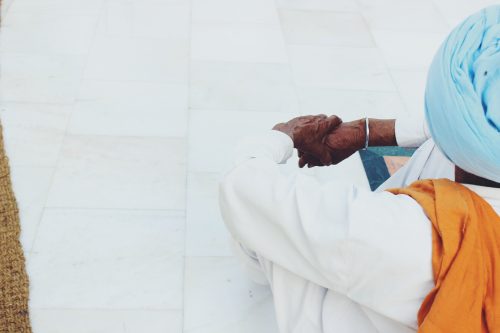 The dawn of tenth November,
nineteen eighty-four saw a dawn
of grey and pink hues, the skies painted
a faded reflection of the colours
that had been splattered on the roads
almost all week, before, and the
city bustled like it did, as always.

As mornings go, it was an ordinary one,
wisps of fog trailing around ankles
as they collapsed under the rays of weak
winter sun cut across in giant swaths
by the shuffling of early risers setting up
the day’s stock – they sat on their haunches,
beedis in hand, waiting for their sales to launch.

The rates of the day were usually decided
by a common agreement of sorts,
a flexible number that was attached
to various goods, as they were dispatched,
and the prices were bemoaned, paisas haggled
over, and free condiments demanded,
all little traditions followed as commanded.

And on the tenth of November,
nineteen eighty-four, another price of sorts
was defined; Fifty rupees (less than a
dollar today, if you’d believe the rates) was
handed over to terrified, attacked mothers
and their children in Sultanpuriˆ, and
they were told, ‘You’re free, and safe to go.’ 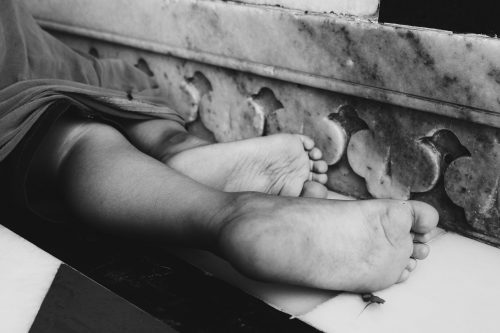 ‘Your body remembers, even when you hide,’
says my mind, as I walk through the narrow
lanes of Trilokpuri, dusty red and scattered
grey, chipped bricks casting meandering
shadows over rapidly fading paths in the
weak winter sunlight.

‘Your fingers know, though you don’t,’
affirms my body, as I feel cold wrought
iron, after warmed stone, after pliable mud
after scraggly, overturned, roots, brushing
against my hands, leaving smears of faded
remembrances against them.

‘Your hands tremble, and you know why,’
whisper my fingers, as the stories I’ve
heard, and the numbers I’ve read, weave
in and out of half-heard radio reports
and state-sanctioned commission outlines
gather, like witnesses.

But they remain silent, party to my own
avoidance, as the loss is snatched away
under acquisition acts, broken down into
statistics, and filed away into comfortable,
byte sized pieces, a broken inheritance of
crippling loss and pain.

A Walk Down the Shukkar Bazaar, Rajouri Garden

(‘Shukkar bazaar’ is a traditional weekly market that’s held on, as the name suggests, Friday.)

I walked by a chuski-wallah today
and he ran a spoon down the row
of bottles in front of him – sapphire,
emerald, ruby glinted off cheap glass,
making things look prettier than they
are, and he ran it back left, tying an
invisible noose around my wrist, and
it held me in place, peering through
the wooden planks that made up his
castle of forbidden treats and tastes.

He smiled back through, rotten teeth
bared in a weather-beaten imitation of
a welcome for an unwilling, unwarranted
visitor, and wrapped a cloth around a
block of ice, greyed and frayed with
age and use – shaving upon shaving of
feathery powder piling up under his
yellowed nails, cracked fingers prying
apart solid dreams to mold to his
own delicious mechanisms.

He looked up again, the question writ
on his face, running the spoon with
slow deliberation across the cap of each
bottle, till I nod, almost imperceptibly at
the murky brown- kaala khatta, extra masala,
and he smiles wider, approving, of what, I
don’t know, and as he pours, I walk away,
deaf to his protestations – I had promised
Ma that I’d stay away from all diseases
in the light of the exam season. 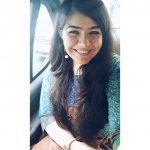 Harnidh Kaur is a 21-year-old student, currently pursuing her Masters
in Public Policy from St. Xavier’s, Mumbai. She’s a debater, slam
poet, and TEDx speaker. She is the senior poetry editor for Inklette
magazine. Her first book, The Inability of Words, is slated for a mid-2016 release. Harnidh Kaur’s blog can be found here.