The Scariest Halloween Ever: Me, Five Aunties, and a Discussion on Marriage and Time Pass

You want a truly scary Halloween this year? Be single, attend an Indian party, and tell an aunty you never want to get married.

This is one of the four Halloween cards I released from my Sketchy Desi greeting card line. It was this card in particular that quickly sold out and got a little dialogue going. I received numerous emails from brown girls who bought the card and regaled me with stories of how they’d been called out, ridiculed, or questioned for not rushing towards marriage. They’d experienced lecture after lecture from so many aunties that at this point they could do nothing but laugh, and so this card offered them both humor and truth.

To be fair, I do believe we’ve evolved as a community. Doctor, engineer, and IT genius are not the only acceptable paths. Both Indian men and women alike are being rallied with support by our community as we win beauty pageants, become professional basketball players, culinary artists, comedians, and acclaimed fashion designers. We aren’t in a complete time warp as a community. Collectively, we—be it our generation or our parents—are venturing out from a linear projection of success. Yet why is it that a brown girl of a certain age (post-25) is given the stankiest of stanky stank eyes if she isn’t married? Why do we revert to traditional notions of wrong versus right of how to live? Where do paradigm shifts retreat to and why are we back at what seems like square one?

In non-uncle/aunty territory and where American media is concerned, it’s safe to assume that at this juncture you’ve probably read numerous studies or articles pinpointing cultural shifts and why women are choosing to get married later in life, if at all. It seems to be a fascination of women’s literature in recent years in this country. A woman’s choice to get married later is often correlated with her having higher earning power, more so now than ever in history, so she does not require a joint income for a higher quality of life.

I’m not concerned with what motivates you to get married or not. What I’m more interested in is our community’s reaction, more specifically, our foremothers’ reactions.

Where do aunties fit into all this? Why, in this day and age, do aunties still badger us? Are they just bored? Is it as elementary as misery loves company as many of you have suggested? Is marriage solely for procreation and is that why brown girls are told to get married, so they can get it on, and propagate their species? When aunties corner us and dispel cautionary you-better-get-married-or-else, what are they really saying?

I was hoping to gain meaningful insights, so I gathered some aunties together for a little Q&A. Ladies, this was scarier than any haunted house you’ll visit on Halloween. This was surrounding myself with aunties, plural, and discussing marriage.

Auntyjis, I’m writing an article about why unwed women in our community are still met with so much dislike. It appears that a lot of aunties are always telling girls to get married and if the girl doesn’t want to get married they are made to feel something is wrong with her. So I just want to know why. Why does this seem to be the overall feeling in our community? I mean really, if a women doesn’t get married, what’s the worst thing that you think is going to happen to her? 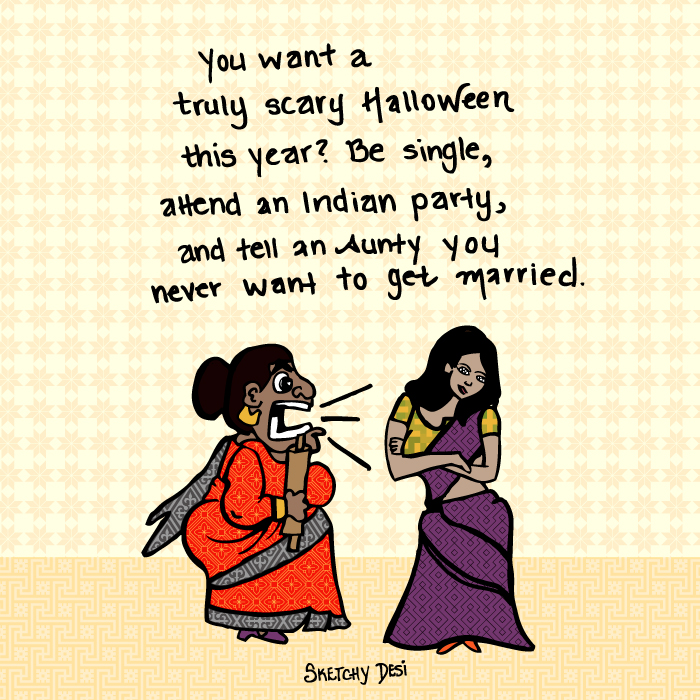 Auntyji 1: (stares at me blankly) Why wouldn’t she want to get married? You mean nobody want to marry her?

Me: No, not that. What if she chooses not to get married, like, she may have suitors or people interested in her but she doesn’t need to be married?

Auntyji 1: You kids are so sensitive these days!

Auntyji 2 cutting off Auntyji 1: You ask what we think is the worst thing that could happen to her, the girl? (Chuckling). You are American in your question! What will happen to HER? She will go here, there, meet this boy, do this. Whatever will “happen” will happen to her parents. How will THEY feel they couldn’t marry their daughter off respectively?

Me: Yeah, I can understand if a woman really wants to get married but just can’t find a good guy then her parents may feel bummed their daughter can’t find love, right? But what if she doesn’t want to get married? And what if she leads a very respectable life, is healthy, financially independent, takes care of her parents, loves her community, then what? Nothing wrong with that right?

Auntyji 3: Because it’s their face, her parents face, in the community, na? It’s every parent’s duty to get their daughter married. It even says in the Vedas that it’s one’s duty, one’s dharma. Just as it’s a woman’s dharma to get married, it is a parent’s dharma to marry off their daughter.

Auntyji 4: What these children will get from you saying dharma? Dharma, karma, shawarma, it’s all same for them, they no care! The truth you want, beti? Women will get lonely. They need marriage. (Laughing). It’s like acceptable time pass!

Me: But auntyji, don’t some people feel lonely even within marriage. Ideally marriage would provide companionship, sure, but can’t we get that from other people or “time pass” in other ways like a meaningful job, community work, tight network of friends, or travel?

Me: Ok can you all explain that a little more in detail.

Auntyji 4: Now you are young, you go out with friends. You get attention from the world when you want. The older you get, everyone else will be in their own world, taking care of their kids, their own family life. You will be single and all your friends busy with their own families. Then what you do? Where you go? You sit in restaurant alone? You travel? With who?

Auntyji 5: It’s about kids. You get married, you have kids. That’s what you do. Baas. You wait to get married too long, you get old and can’t have kids. Beti, it’s not philosophy. This is commonsense biology!

Me: What if you don’t want to have kids?

Auntyji 5: OK, then what? What you do with yourself?

Auntyji 2: (Straightens up in her chair and clears her throat). Beti, adults have needs. Women have needs. Marriage provides a very comfortable outlet for those needs.

Oh SWEET LORD ALMIGHTY, I’m thinking, Auntyji is going to break some wisdom off about sex.

Me: Auntyji, in this day and age though, don’t you think men and women can find a comfortable outlet for those “needs” outside of marriage?

Nothing but silence. Deafening silence. Like crickets have ceased chirping kinda silence. My breathing quickens and I’m sweating. Someone say something, oh god, oh god, oh god, these aunties think I’m a ho- and they’re gonna tell my mom…

Auntyji 3: Just because that is happening, doesn’t mean that it right. There is difference in going out with every man and woman for brief time for kama, for pleasure, and having a sacred union and having intimacy with your husband or wife.

Ok, so we’re back to the Vedas, I thought.

Me: So when you tell a woman to get married, why are you doing that? What is it you are hoping she will achieve or get out of that advice?

Auntyji 4: You see, in this country you can have it all. Family, career. So why choose? Have both! Be successful! It’s not easy but women do it these days.

Me: But can I get an answer for what it is you are so scared about when a woman says she doesn’t want to get married? I mean really, what is the worst thing that you think will happen to her? You feel your fellow woman will get lonely? That she will live in sin? That she’ll do “bad stuff” for “time pass” – is that it?

Heads are shaking in fervor now with a chorus of yes and haans.

Me: And If an Indian woman were to tell you she doesn’t want to get married what would you say to her?

Auntyji 5: I would say really, really, REALLY think about that decision. You may think you don’t want husband, kids, house, now. But what about five years from now? 10 years? Then you’ll be too old to find anyone.

Me: And what about if you already have those things now and in five years you don’t want it, that it wasn’t the right decision, then what? See what I’m asking auntyjis? Why is one choice better than the other if both of them may potentially result in regret?

Auntyji 3: Areh ma, you girls complicate things these days. Anything can result in regret, so what, you should do nothing? No! Then you do what every woman for generations and generations before you have done and will do. You will, as you kids say, “work things out,” find what works. Nothing easy. You understand?

Auntyji 4: No one saying you will be happy necessarily if you married, but if you don’t get married, will you be happy? Maybe not. See, in marriage you will have other things like security, companionship, community, kids, support system. These are no small things!

In unison they all confer that no, this is not a small thing indeed.

Auntyji 2: Look bachcha, it’s not that we sit worrying at night that so and so’s daughter not married. No, we are too busy worrying about our own lives, our own children, our health, but we still talk, you are right. We gossip, but we always care. We still ask you girls why you no married, why? Because we are your community. If we don’t take care of you, then who? We are like your mothers!

Me: Haanji, but you know, maybe that’s the challenge, the culture gap. In America, we’re told to respect someone’s business so we don’t ask someone —

Collectively the auntyjis cut me off and speak over each other, each saying some variations of:
Then how can we talk?
Business and who’s business is what is wrong in this country.
No one listens to elders!
You kids these days don’t know how to listen to advice.
Too sensitive, these girls!

I’ll be honest with you, dear brown girls, I was spent. I wanted nothing more than to crawl into my cup of chai and pull its strength over me to remind these women that hey! This is America! This is 2014! Indian women of my generation don’t need to rely on marriages to provide literal hotbeds of sexual explorations! Companionship comes in different forms then what you have brought us up to witness. And the Vedas? I am irreverent of these dogmas of duty. It’s antiquated. You know what else, aunties, for many, the commitment to Self far outweighs commitment to a patriarchal paradigm! So there! By the way, none of you particularly seem happy in your marriages so what does that communicate us?

I didn’t say that. I didn’t wage that war. I didn’t know what cause I was trying to champion anymore because my thoughts were interrupted with –

Auntyji 3: Don’t bother her more, she’ll write it in her article that aunty ask many questions about her business!

And then, all I heard was a crescendo of laughter, at my expense, ringing in my ears.