If you say #BlackLivesMatter, but you Really Mean ‘Black boys matter,’ it Doesn’t Mean Much

This post was originally published on Duty Free Critic.

Why is it that when I hear some music celebrities use the phrase #BlackLivesMatter, they only refer to Black men? Usher and Diddy recently lent their support and spoke out on the matter respectively, but in a way that centered on Black men and boys. I want to be with them in their sentiments and I am, but it still frustrates me how whole hosts of people are so quickly forgotten in times like this. If it weren’t for my friends on Twitter and Tumblr, I would believe that much like Usher and Diddy, most people see Black men as the sole victims of police brutality. False. They’re not.

Back in September, Usher lent his support to his friend, designer Kerby Jean Raymond, who designed these politically and socially relevant t-shirts. He designs clothing for the high fashion brand, Pyer Moss, but wanted to use his platform to make a powerful statement in the wake of the those who killed Eric Garner and Mike Brown. Unfortunately, his statement was not at all representative of the issue; his shirt only had the names of Black men on it.

Am I surprised? No. As I have recently begun to learn, the invisibility of Black women has happened time and time again throughout American history. And as a non-Black woman, I will never know what it feels like to be in their shoes, but I am beginning to understand as best as I can. A quote from Dr. Treva B. Lindsey, paints this picture ever so vividly: “Prevailing narratives around Black violability and anti-Black racial violence pivot around Black men and boys.. Black women and girls are viewed as exceptional victims as opposed to perpetual victims of anti-Black racial violence” I could not have said it better myself even if I tried.

Black people have been violated and have faced much racial violence in the U.S. for centuries, but this thought is very much centered around the idea of the “scary Black male.” If Black men are repeatedly highlighted as the only victims of anti-Blackness, then how can anyone else be affected, let alone acknowledged? Well, that’s a funny story…

I recently had someone I know “not see me” and mistake me for a “scary Black man” so when I knocked on her door (in daylight), she turned off her lights and hid in her house. Some might say, “Oh, but you’re not a Black man. That wasn’t directed at you.” I know I’m not, but for a variety of reasons, I was put in the same position as a Black man would be put in. To have someone treat me like that, really hurt me and honestly, still bothers me. It showed me that at the end of the day, anti-blackness is well, anti-blackness and many will get caught in the fray no matter what their ethnicity or gender is. And in many cases (I won’t elaborate here), one’s ethnicity and/or gender will actually exacerbate the prejudice, the harassment, and the violence. So please, stop with the #saveoursons hashtag. It’s just derailing the cause.

But don’t misunderstand my critique. Mike Brown. Tamir Rice. Eric Garner. Their names do matter and I need you to recognize that my criticism of Kerby Jean-Raymond and his t-shirt design does not and should not diminish how I feel about THEIR deaths. Justice needs to be served and I am in no way trying to erase what happened to Eric, Mike, Tamir and so many other Black men. Their lives matter.

But please, remember Yvette Smith. Remember Aiyana Stanley Jones, Tiffany Edwards, Cemia Dove and remember Tarika Wilson. These names are important. So important. And I need you to realize that these women need to be kept alive too. Their lives need to matter. So when you protest, please, protest for them too. 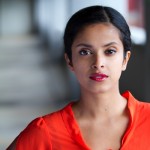 Multidimensional in her talents, Duty Free Critic spends her days enthralled in her creative outlets. Whether she is critiquing music and fashion culture on her blog, or posting raps and personal style videos on her YouTube channel, Duty Free is always passionate in her pursuits. And no matter where she goes in life, one thing is for certain: she will always look at everything with a critical eye, but that doesn’t mean she can’t have a little fun along the way. Duty Free Critic works in digital design and resides in the Tri-State area. Follow her for daily updates on her blog, Twitter and YouTube channel.