Written and performed by Qurrat Ann Kadwani, “They Call Me Q” is the true epitome of a one-woman show! In June, Kadwani made headlines in the theater world when she became the first South Asian woman to ever have a solo Off-Broadway show.

The play tells a story of a young girl growing up in Bronx, New York, with traditional Indian parents, eager to fit in with her culturally diverse peers. And it’s evident through the 13-characters Kadwani plays, identity is a major theme of the play. The many characters she transforms into have shaped her life in some way, including her parents, Caucasian teachers, Puerto Rican classmates and African-American friends. Overall, it’s a show about self-discovery, which speaks to the universal search for identity experienced by immigrants of all nationalities.

After 23 weeks of performing in New York City, Kadwani said it is still unbelievable.

As for writing the play, Kadwani admits, it took many long nights to complete.

“It took me a couple of years to write it, because writing character monologues is no easy task,” she said. “I wanted to make sure the story flowed, made sense and that I portrayed all the characters, regardless of their ethnic background, in a multidimensional way. I also wanted to portray my parents and my culture in a respectful manner.  I wanted to have comedy and also tragedy. It took me about five weeks to edit, memorize and work on characters.”

The inspiration behind the play comes from wanting to tell story, in a unique way, Kadwani said.

“I’ve always wanted to create my own and I began to think about what message I wanted to put out into the world,” she said. “I thought, oh right, I’m an Indian girl who grew up in the Bronx. Maybe people will resonate with the idea of having a traditional culture in an urban environment and how that pushes and pulls you in a bunch of directions.”

Kadwani wants the audience to feel a certain way when exiting the show, and after watching the solo-play, it did in fact capture the evolution of a multicultural identity from birth to adulthood, and that truly resonated with me and the audience.

“I hope that audiences feel we are all connected in this vast world,” Kadwani said. “We are not as different as we may think across cultures, religions and neighborhoods. In our search for identity, we deeply impact each other.”

The play truthfully follows the main character, Qurrat or ‘Q,’ as she searches to find her own identity through the clash of the culture she learns at home to the one she encounters on the streets of “Boogie Down Bronx.” The way in which she captures the reality of her parents is with such accuracy, but it still bears no resemblance to stereotypes.

“I have a very traditional family and grew up in a very urban environment,” Kadwani said. “The combination of those two things created a difficulty my whole life,” Kadwani said. 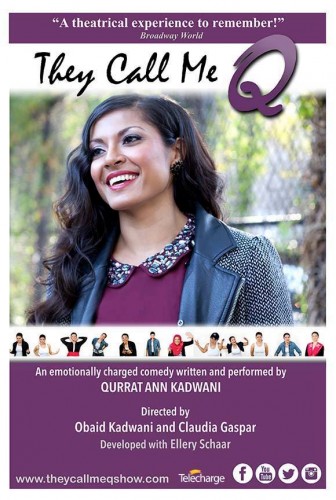 It is refreshing to see more South Asian Americans breaking grounds in the arts and entertainment industry, and more so, it’s encouraging to hear that Kadwani’s parents were supportive of her “out-of-box” line of career.

Kadwani, a theater major in college, said her mother saw her knack for acting first, during opening weekend in NYC, in 2012.

“She sat in the front row and she loved it – especially when I rave about her cooking!” Kadwani said. “My father saw it [“They Call me Q”] four months later, when it was produced by a non-profit organization. He couldn’t believe I memorized so much!  They both saw it again on opening night Off-Broadway at St. Lukes Theater in May, and then my father came again in July! They are really so proud and happy to see me represent our heritage, our community and myself in such a positive way.”

As for the various characters Kadwani plays throughout the one-hour show, she portrays each one uniquely and embodies their body languages, mannerisms and accents.

“I thought about which experiences stood out to me in my journey,” Kadwani said. “Certain instances in elementary school that depict bullying kept coming back to me so I included it. The feeling that my life would have been so different had my parents decided not to immigrate to America was strong for me- yet I wanted to show that women in India don’t necessarily want our lives here. I featured people who have strong voices of their own and combined them with mine.”

Even though Kadwani has the solo-show done to a tee, she claims each show comes with a different experience.

“Every time I perform, which is over 85 times now, I realize something new about myself, about my relationship to others, and the values I have developed by being an ethnic woman.”

When it comes to shedding away stage freight, Kadwani has a unique way to finding her inner confidence.

“I always tell myself that people want to hear what I have to say and they’re excited; they’re not here to judge me,” she said. “Once I accept that, I’m able to put on a great show and have fun!”

It is obvious, Kadwani has a pure love of acting and hopes to continuing pursuing her dream as an actress.

“I would love to play a superhero with Robert Downey Jr, a seductress with Ryan Gosling, a best friend of Susan Sarandon, and the list goes on and on!” she said.

For aspiring and budding actors, Kadwani said, “treat acting like any profession- get a degree!”

“The profession is just as hard, if not harder, than others and it is so important to know history, technique, and business elements,” she said. “After that, be prepared for rejection and be prepared for a lot of work. But if you truly love it and there’s nothing else you want to do, you’ll never be unhappy!”

We want to see more of Kadwani, and according to her, we have a strong feeling we will.

“I’ve been experimenting with film,” she said. “I’m also researching for my next solo show. I continue to MC weddings, fashion shows and special events.”

Shows are Tuesdays at 7 p.m. and Saturdays at 2 p.m. until Oct 28 at St. Lukes Theater, at 308 West 46 St Off Broadway, in New York City. It is also playing every Sunday at 2 p.m. in November. Purchase your tickets here.

To celebrate the 100th show party, Kadwani invites you to join her on Nov. 14, visit her website for details. 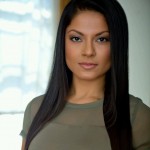 Qurrat Ann Kadwani is an actress, producer, emcee, and philanthropist.  Ms. Kadwani was raised in the Bronx, attended The Bronx High School of Science and received a B.A. in Theater from SUNY Geneseo.  Ms. Kadwani’s one woman show They Call Me Q opened Off Broadway on May 19 and is currently running at St. Luke’s Theatre in the theatre district. Playing 13 ethnically diverse characters in one hour, They Call Me Q questions how to develop identity within the context of a traditional culture in an urban environment.  To date, she has performed her solo play 100 times. She has received the Best Actress Award at the Variations Theatre Group: Harvest Festival 2012 in NYC and Best Play Award at the Maui Fringe Festival 2013. Non-profit charity organizations have presented her solo play as benefit fundraisers.  Colleges and universities all over the US have invited Ms. Kadwani to perform her solo play as part of their multicultural programming, alongside discussions and workshops on diversity. She has received an award from the United Nations World Women Global Council, an award from the Asian Pacific Islander Cultural Center in San Francisco, an award from SAPNA NYC for inspiring South Asian women to dream and make their dreams a reality and was the Guest Speaker for CAMP Philly.  Ms. Kadwani also helps coordinate A Slice of Hope, spreading hope and joy with pizza parties and musicians at homeless shelters all over the county.  www.qkadwani.com

Shehn Datta Discusses the Importance of Voting and Ballot Measures

Shehn Datta Discusses the Importance of Voting and Ballot Measures