A Prose Piece About Constantly Being Identified as ‘Exotic’

The following prose piece is in collaboration with #ImmigrantHeritageMonth.

Throughout my life, I’ve been called E-words enough times that the F-word is inclined to follow.

Nowadays I rarely divulge my ethnic identity on command without judging or feeling judged. Growing up, however, I was fond of the question. In a town with a predominantly white population, I was flattered when someone took an interest in asking me; it meant they acknowledged I wasn’t white. I remember excitedly sharing (my history) (my family) (my identity) (my soul). But after repeated offenses, after the cons began to heavily outweigh the pros, I stopped investing so much of myself into my responses. It felt like pieces of myself vanished with strangers, with acquaintances, and with the greedy. It felt like I was a circus performer, briefly used for entertainment and then abandoned.

When I find her, she’s been mangled. Shards of mirror glass protrude from her skin. Her mosaic is glued together with blood, and when I look at her, I only see a fragmented version of myself.

“Where are you from?”

My audience awaits “The Great Reveal.”

The time between the question and the answer feels like an out-of-body experience. I zoom out, observe two characters interact, and words from potential scripts rush about. I’m inclined to direct the scene, but I’m fired before given the chance.

Having dealt with this scene for around two decades now, I’ve pinned down its usual prerequisites. One, I must have just met this person, preferably five minutes ago. Two, this person must be a heterosexual man. The latter prerequisite leads me to believe the encounter isn’t just racialized but sexualized as well.

While I’ve become familiar with the character criteria, I have yet to realize a pattern in the moments leading up to the questions. The inquisitions are unannounced rainstorms, ending as quickly as they begin. Prompts range from silence to last night’s festivities. A conversation rarely gets six minutes deep before the undying need to label me becomes transparent. I am always caught without rain boots.

“What am I?” my future daughter whispers.

“What are you?” he inquires. In three syllables, I am objectified. In three syllables, he lets me know I haven’t glided into one of his preexisting categories. In three syllables, he successfully alienates me, builds a wall between us, and climbs atop it to gaze down at me. I’ve turned into a spectacle for viewing. I can tell he’s becoming uncomfortable with my hesitance and resistance. He’s probably used to navigating like Columbus, charting territory already claimed, already defined. His inexperience with confronting ambiguity is screaming. His privilege is showing.

“Where are you from?” she implores. I quickly ascertain her assumption that I’m not “from around here,” with “here” ranging from a city to a nation. When she’s unsatisfied with my location of residence, and still unsatisfied with my birthplace, I read further into her assumptions. Her words become jabs, underhandedly telling me that I look, and possibly act, foreign. I stop giving her the benefit of the doubt and begin to view her as xenophobic.

And so I attempt to pack an answer infused with power and determination. “You’re a beautifully complex dancer interpreting the world as you go, and pounding the earth with bare feet.”

She smiles with one side of her mouth and clasps my hand. Together, we flash back.

And so I tell you, in words painful to regurgitate.

After you’ve processed my words, you declare, “Ohhhhhh wow! That’s such a cool mix!” And suddenly you introduce a new topic. You quickly silence your subject, evidently satisfied with your detective skills and your ability to elicit a monologue of explanation. You silence and ignore the facets articulated, foreshadowing when you’ll silence and ignore me.

Honestly, I’ve become accustomed to the dead ends and the awkward transitions, but I’d like to point out the discord. Your excited declarations in response to my vulnerability directly contradict your lack of engagement and your proposed transition.

When I’m not granted cool points, I’m told, “You’re so ethnic!” or “You’re so exotic!” All I hear is, “You’re so other!” This othering and exoticism may seem coveted to someone who is included into mainstream culture. (After all, appropriation is a thing, right?) But to someone who is not normal, these excellent observations about my physical appearance and these excellent assumptions about my cultures, make tangible my ability to be commodified into a supermarket aisle.

Another common reaction is to pay me a compliment laced with insensitivity. “No wonder you’re so pretty!” Because this follow-up usually drops from the mouths of heterosexual men, I’m already suspicious of their sincerity. Once I remove myself from the sexual implications, I wonder what they are implying about Asians and Latinas who fit stereotypical phenotypes. I wonder if I look less threatening, and more innocent than my older generations because my skin color, facial features, hair, and curves have all been blurred.

But the response that pains me the most is, “You must have the best of both worlds.” This triggers a deep spiral into memories of one-sided family get-togethers, where my ethnic identity was compromised at the expense of household peace. A deep spiral into memories of two-sided family get-togethers that laughed at the idea of a multicultural festival, and disapproved when the children crossed the heavy invisible border. As one of the nomadic children, I learned that the ethnic segregation around me held hands with the ethnic conflict within me.

“You’re expecting too much.”   They say.

After the exchange occurs, I wonder. A lot. I wonder if brown women are the demographic most targeted when you pose these questions. I’d never want you to be colorblind, but I wonder why you wanted to know and what difference it made, what purpose it fulfilled, and whose agenda it helped. I wonder if you’re another taker and if I played the giver once more. I wonder if I’ll ever even see you again. I wonder if my answer was reduced to your labeling system, the nuances going in one ear and out the other. I wonder if you distilled my answer to organize your tousled mind, and if you tossed me into the proper folder of your file cabinet. And after you made a racist joke, I wonder if you had asked me in order to bypass racist attitudes towards my people, but to openly denounce others, assuming we shared a common enemy. I wonder if you ever questioned your own identity, or if there was no need to because you never felt those questions close in on you. I wonder if you’ve always been comfortable enough to view yourself and your people as the standard, and others as deviations.

Often I echo your inquiry, anticipating you squirming under my microscope. If you are white, you typically dismiss the questions like they’re old news, normalizing your existence and declaring your right to this land is greater than mine. If you are a person of color, you typically answer in one of two ways. Either you minimize the questions with a simplified version of your identity and immediately change the subject. Or you detail yours with a sense of internalized exotification, using the white gaze to make you seem cool, different, and unique, effectively normalizing whiteness.

Rarely am I able to hold a prolonged, conscious conversation about ethnic backgrounds when the conversation debuts with, “What are you?” Sometimes, I simply don’t have the energy to engage and educate you. Usually, I’m exhausted from a recent, similarly painted conversation. Other times, I steer the conversation towards multiculturalism, binaries, systemic racism, stereotypes, or exoticism. In this way, I partake in self-preservation.

We walk in the rain without an umbrella because we know it’s perfect for hushed voices and occasional tears. Thump, thump, thump. I listen to the beat of her dancing. 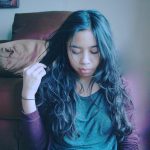 Adeline Nieto is based out of New York City and is currently studying at Teachers College, Columbia University. Adeline is both an aspiring teacher and an aspiring author. She believes in leaning into ambiguity to find authenticity. She has been published in Rethinking Schools Magazine and in Rhythm and Resistance: Teaching Poetry for Social Justice.