I vividly remember being 10 years old, excited to watch “The Simpsons” episode featuring Apu and Manjula’s wedding. At that point, it was one of the most popular shows on television, so I knew most people I knew would watch, and through it, maybe get a glimpse into some small aspect of my culture.

It didn’t matter that the episode was about a goofy cartoon’s clichéd arranged marriage, or that it had zero authenticity or connection to my family’s actual experience whatsoever. We got a whole episode focusing on the most widely recognized brown “person” in American pop culture. Apu was all we had, so I, along with every other Indian kid I knew, loved him.

But luckily, times have changed.

In “The Problem With Apu” comedian Hari Kondabolu sheds light on this problematic character and the implications of the lack of South Asian representation in American media.

Take a moment to think of how surreal it would be to never see someone who looks like you represented anywhere but in your own home or close community. Every advertisement, television show, movie, sports, music; everything you are bombarded with on a daily basis is making a point by way of exclusion. You are subtly being told that your culture, and effectively you, are not worthy to be reflected or included in the greater conversation. While contributing immensely to the fabric of this country, your people remain invisible.

Stemming from a piece he did while writing for the FX series “Totally Biased with W. Kamau Bell,” Kondabolu makes the case that having only one stereotypical character represent a group of a billion linguistically, ethnically and culturally diverse people is not only inaccurate, but also offensive and just plain lazy.

At the same time, he reiterates many times that this hatred for Apu is in conflict with his love for “The Simpsons” as a whole, a relatable feeling, I’m sure, for many South Asian watchers.

Hank Azaria, a white man with no discernable South Asian heritage, being the voice of said character for nearly 28 years, only makes matters worse. During Kondabolu’s discussion with Whoopie Goldberg, they examine the history of minstrelsy in America and question whether the character of Apu could be viewed through a similar lens.

Minstrel shows involved Caucasians putting on blackface, displaying exaggerated and negative stereotypes, singing and dancing, in order to mock and ridicule Black Americans purely for the amusement of other white people.

While Apu is nowhere near on the same level of offense given the historical context, it is disappointing to see to how the derision of minorities and perpetuation of stereotypes persists by being so heavily engrained into our culture.

One example of negative Indian stereotypes on screen included the 1968 movie “The Party”. In it, Peter Sellers depicts a bumbling Indian idiot who doesn’t know how to act like a human person, all in full-blown brownface makeup and an accent that sounds like no Indian person I’ve ever heard. It’s of little surprise that Azaria cites this very portrayal as an inspiration for Apu.

As a Hari Kondabolu stan, this documentary delivered everything I’ve been waiting for and then some. However, some of the backlash the film has received has been especially odd.

Most of the disapproving comments fall into three categories:

A.) The South Asian (or other minority) who says they’re okay with it so everyone else should “lighten up”. Because they speak on behalf of all of us, right?

B.) “They make fun of everyone! I’m Scottish (or insert any other stereotype on the Simpsons) and I don’t whine about Grounds Keeper Willie! And that’s the exact same thing as Apu because I don’t understand that White privilege is a thing!”

C.) Blatantly racist comments involving “curry” telling us “liberal dotheads” to shut up. Thereby negating the previous two categories while proving the importance and necessity of the film in the first place.

Simpson’s co-executive producer and writer Dana Gould comes to the defense of Azaria’s performance of Apu stating, “There are some accents, that to White Americans…are just funny. Period.”

Oh, that totally makes it better, my bad Dana.

If every minority accepted the status quo simply because a white man in power said it wasn’t a big deal, we would all still be colonized.

Azaria’s self-admittedly exaggerated, inauthentic and ultimately racist accent was the most widely recognized representation we had for a long time. The problem with this is essentially the problem with Apu. He is all that America saw of us therefore the majority of American’s, believed and still believes, Apu is all that we are.

On the grand scale of injustices, a problematic cartoon character definitely ranks somewhere near the bottom. That doesn’t mean the issue doesn’t deserve attention and rectification. What I find most offensive is that it’s just not funny, and has never been clever. Apu is tired and boring. Most of us, who grew up with the Simpsons, have long outgrown them. We aren’t 10 years old anymore.

If you want something better to watch, check out “The Problem With Apu” on TruTV. Also, we have actual brown folk with shows these days. Apu who? 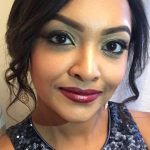 Jisha Japagnanam was born and raised in PG County, MD. She is a Speech-Language Pathologist working in D.C., who enjoys bottomless brunch, trashy reality t.v., and smothering her niece, nephews and cat, Sissy Mama with love.