December 16, 2012: The Nirbhaya Gang-Rape took place in the capital of India, New Delhi.

The brutal act made headlines globally. I was in India on vacation and was extremely upset to hear about the devastating inhuman gang-rape . The constant news coverage of the case changed my perspective on life.

But I’ve always believed art could speak and touch hearts. And as rightly seen, art is integrated within the word heart, so I decided to do something towards creating awareness about women’s issues, but I did not know what that something would be.

For a few days, I brainstormed, I thought I was a very small entity in this huge world – too small to make any difference. But every small contribution counts.

I finally decided to create social awareness through art.

I portray the atrocities that a woman faces right from when she is in the womb until the end of her life. I let my idea percolate and refined it for about 14 months and then began painting them on canvas.

Painting took me close to three and a half hours, from which I came up with 15 pieces in a series I titled, “Women’s Rights and Empowerment.”

I ended the series with a piece I called “Hope,” because I didn’t want the end to be in darkness.  I strongly believe hope keeps our life going in the true sense.

Creating social awareness is the first step towards the cure of any social problem. My art exhibits were well-received. And it’s because I knew my art came from a place in me that felt deeply for the women who faced atrocities or were victims of domestic violence.

“The pen is mightier than the sword.”

Actually, the pen is mightier than anything else. I never took my poetry seriously. I used to write but never knew that it could be influential. But my painting series “Women’s Rights and Empowerment” inspired me to put my feelings in poetry. I was motivated to use my writing to supplement my efforts of creating social awareness through art.

Then in 2014, I wrote a poem titled “Save Girl,” which won several awards and accolades. I received so many messages and phone calls from women who expressed their emotions after reading it. Such wishes and great responses are true motivation to help me keep going.

I wrote my next poem in 2015, titled, “Four Wise Men.” The poem is inspired by my painting “Gang-Rape” from an art series on “Women’s Rights and Empowerment.” The poem focuses on the helplessness of a woman. But, in spite of her being a victim, I want to see women emerge strong. So, instead of an expected sad end, I am trying to highlight the side of responsible men in this society and ‘hope’ through my poem.

I believe the root of women’s social issues is gender discrimination in this society. Women are treated as possessions and have traditionally been seen as “weak” in our society.

My gut feeling told me to vent the emotional trauma of the female and the extent of fear she has when she gets into a horrible situation of being raped.

“Four Wise Men” takes us through that emotional ride. 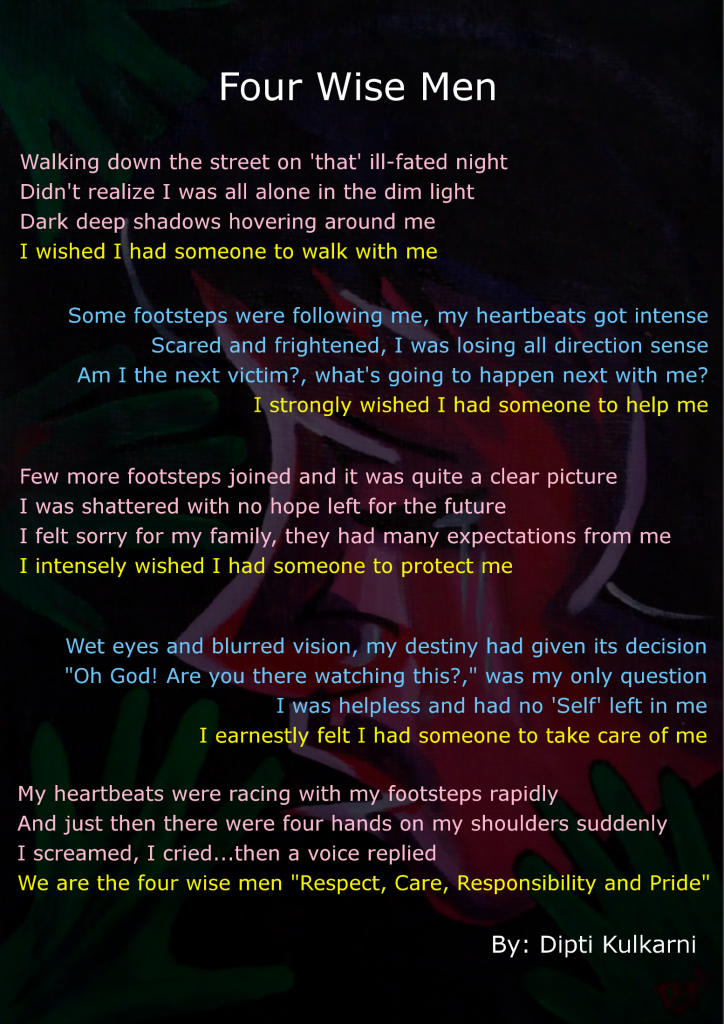 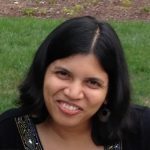 Dipti Kulkarni is a New Jersey resident and a Software Engineer by profession, and an Artist by passion. She is currently working as a Sr. Analyst in Bank of America. Born in Nashik India, Dipti is an established, internationally acclaimed artist who had several Solo exhibits in India and in USA. In 2014, she launched her 15 painting-series on “Women’s Rights and Empowerment” that gained popularity and can be viewed at :http://www.diptiarts.net/my-gallery/woman-rights-and-empowerment These works were exhibited at various places in USA and Artist Dipti Kulkarni also had several Solo exhibitions in India to create Social Awareness through Art. She believes that Art can speak and touch hearts. She also has written award-winning poems on the similar subjects.