My Story of Living a Double Life: Indian and American

Whenever I go back to my parent’s house in Saginaw, I step into a different world. There’s a clutter of conversation in Hindi, a pot of chai on the stove, and – more often than not – a 1960s Bollywood song playing from the laptop in the kitchen.

Growing up Indian-American, I have learned how to code switch pretty well. I hide certain aspects of my identity depending on the space I am in, without even realize I’m doing it. I pride myself on being able to transition between chatting in Hindi with family friends to joking about pop culture references with peers at school. And while I really value this naturally formed cross-cultural view, feeling like you are two different people can get to be draining.

My parents came to the United States from India about five years before I was born, and they did everything they could to pass on Indian culture to my sister and I. I learned how to speak Hindi before English and went to Jain Sunday school regularly. At home, I danced around to Bollywood tunes, got dolled up in traditional clothes and traded cheesy jokes in Hindi. From celebrating traditional holidays to regularly visiting extended family in India, I’ve been immersed in this heritage.

If home was where I learned what it meant to be Indian, school was my exposure to America. I learned English, read about Benjamin Franklin and Thomas Jefferson, and listened to Britney Spears. I learned the formalities of always saying “please,” “thank you” and “excuse me” and that everyone has unalienable rights to life, liberty and the pursuit of happiness.

I also learned that the food my mom gave me for lunch smelled different or was “too spicy.” That speaking Hindi to kids in class probably wasn’t an effective way of communicating. That being a vegetarian meant I could rarely buy school lunches. I learned that having henna on my hands was “weird” and Bollywood references were not something widely related to. These things that were so normal to me at home weren’t relatable to my friends at school.

And so I started hiding them.

It isn’t just my peers that I hide from. There are things I don’t expect my parents to fully empathize with. While both of my parents buy into the American Dream in their own way – my mom is the biggest Detroit Pistons fan I’ve ever met and my Dad loves talking about American politics – they grew up in another status quo. When we visit family in India, I’m reminded of just how different that world can be. From loud, bustling streets to communal decision-making, it’s not just a different place or culture, but a completely new mindset. And it’s a way of thinking that can directly contradict what I learned to in schools.

Don’t get me wrong. I am so grateful for the huge sacrifices my parents made to give me the life and opportunities I have today. Leaving their family, their home, their comfort zone to come here is an incredibly difficult thing. It’s a sacrifice that I can’t ever fully thank them for.

But spending the majority of my formative years in a physical, cultural, and social environment so distinct from that of my parents inevitably creates communication gaps that go far beyond generational differences. As it is often Western norms of etiquette, communication and dressing that govern professional codes of behavior and definitions of sophistication, taking on these norms becomes necessary for success – especially the success that my parents gave up so much to pursue. But doing so also inevitably means downplaying aspects of the very heritage my parents so preciously carry with them. Managing that contradiction comes with a cost –  a constant feeling of  choosing between two distinct versions of myself, with each decision feeling like a betrayal.

In a recent video, Canadian Prime Minister Justin Trudeau imagines a different sort of diversity education – one that starts early in our public schools and goes beyond bringing in a dish to share or showcasing dance and music at a school-wide “international night.”

“[We have to ensure] that education gives people the tools to understand that you don’t have to choose between the identity that your parents have and being a full citizen of Canada,” Trudeau said.

I can’t tell you how much this resonates with me. While codeswitching is a skill I’ve picked up over the years, I also wish someone had told me when I was younger that I didn’t have to switch between two identities – I could be both. Providing tools for managing multicultural exchange from a young age creates opportunities for beautiful cultural exchange, but more than that it alleviates the guilt that comes with feeling like you have to choose. Creating that sort of an environment won’t happen overnight, but I hope to start working toward it.

I know I still hesitate to blend the two spheres of my life, but I’m going to make a conscious effort to share more of my whole self in spaces. So the next time that Bollywood tune is playing or I have a cup of chai on the stove, I hope you’ll join along. 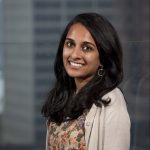 Born and raised in an Indian-American household in metro Detroit, Harsha currently works as a communications assistant with DTE Energy through a year-long fellowship program called Challenge Detroit. In addition to working at a host company, Challenge Detroit fellows spend one day a week doing innovation consulting projects for different nonprofits. Harsha’s passions include Detroit, corporate social responsibility and Indian-American identity. She is an avid doodler, history nerd and spontaneous dancer, with a copy of the Alchemist and a boxed set of The West Wing next to her bed.