Tasneem Mandviwala is a Houston-based artist, Muslim-Indian and a self-proclaimed feminist. Her artwork has been displayed at various venues throughout the Texas area, including the Jung Center and Matchbox Gallery.

The central theme of her art is to create awareness of the idea of truth, and she believes that the concept we perceive as the truth is different for every person and that these “truths” can sometimes be proven otherwise. Check out her artwork and let us know what your impressions are in the comments below.

Captions and artwork by Tasneem Mandviwala

By juxtaposing the Playboy bunny logo with the veil, this piece suggests the extremes of importance women’s bodies are given by men, both in the West and East. The logo itself is sliced and presented as separate parts, just as women’s bodies so often are in Western media.

In patriarchal cultures, the undesirable “mystique” remains that a woman either must be entirely covered or entirely uncovered. Juxtaposing Playboy bunny ears on a completely veiled woman, this piece unapologetically confuses these expectations.

Using traditionally feminine materials, this painting maps out the socially stressful experience of being an unmarried woman, especially in South Asian culture. The ribbons literally serve as a corset to the canvas, representing the tight social norms of marriage.

This piece speaks to the “rightness” of marriage from a social perspective, with the humanoid red figure in the foreground decked out in a simple form of the typical gold bridal jewelry found in many South Asian and Middle Eastern cultures. Until there is marriage, there is panic.

Inspired by C. Sherman and M. Schapiro’s “Womanhouse,” this piece speaks to issues of domesticity, fertility and the ennui that can often result from being pigeonholed as only a housewife. At the same time, however, there is a sense of a hidden potential for subversive power.

This piece documents the experience of bilingual learning and the idea of being immersed in two tongues to different degrees. As one sharpens and gets larger, the other’s presence diminishes. Although most chaotic, the central overlap of the two languages—and the worlds they bring with them—is the most intriguing and rich moment.

Although the U.S. has done many great things, it has also done many terrible things. Sometimes its most limiting factor is its outlook on the rest of the world; that is, its perception that it is the entire world. America “aids” other nations to purportedly help them achieve greatness, but all too often, it does not recognize that there can be multiple forms of greatness

Inspired by conservative pundits on national news networks, this piece plays on the idea of a Muslim takeover of America. In Gujarati-Arabic script, the Pledge of Allegiance is written over the U.S. flag, with a heart replacing the word “God.”

If you see a piece that you like or if you want to purchase any of Mandviwala’s work, click here. 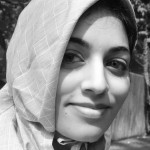 Tasneem Mandviwala, studied art history, psychology and English literature, and has an M.A. in the latter from University of Houston. She has also taught English in a number of places to a number of ages, including Houston and Mumbai, and is an online editor for academic papers. Currently, Mandviwala is a Ph.D. student in the Department of Comparative Human Development at University of Chicago, she hopes to foster greater understandings between individuals who are members of diverse populations such as those found in the U.S. Mandviwala believes a willful childlike spirit of curiosity and openness can solve many things in this life.