“What do you want to be when you grow up?”

This is a common essay topic in school that I was often asked to address.

It never seemed like there were a lot of fantastical career options when I was little. Or maybe, we weren’t exposed to as many options or the whole wide world out there. Or maybe, it was because we lived in a small town. But, it seemed like the only career options that existed were to be either a doctor, a farmer or a teacher. Occasionally, we heard of more exotic options like engineers or cricketers, or even an astronaut like Rakesh Sharma.

As for me, I always wanted to be a doctor — like my mother.

With the upbringing I had, and living in a small town, we all knew we would follow in our parents’ footsteps. It was what was done.

And my mother had the life of dreams.

I was lucky to have a mother who was not only an excellent, very well-loved and respected doctor (an ob-gyn), but was also extremely well-read. She had seen the world and knew how it worked. She also was that rare individual who was grounded with an extremely refined common sense.

But, events turned out differently as I reached puberty and my mother who was once my idol, turned into my worst enemy. But, that was also just my perception.

That’s the relationship status quo between a mother and daughter. She was really still the same woman who worked the whole day, and sometimes late into the nights as an Ob-gyn. The miracle of birth knows no time-table.

The drive from our house to her clinic was a long one. And she drove. And, to this day, she’s the only female who I have heard men praise for her driving skills.

At night, she whirred away on her sewing machine through the cover of darkness — it was her only free time to indulge in her favorite hobby.

Today I live in a city like Venice, and Rome before that, and I see these designer clothes and I think to myself,  “I’ve already seen similar designs before.” I saw my mother wear them in old sepia-colored photos. I saw them when she stitched clothes for me using designs which were not even on the market — and I hated them all. I hated the fact that she expected me to wear something weird that didn’t exist where we lived, and I hated that she was making me things that we could have easily bought readymade. Her designs were out of my world. They were strange for me and uncomfortable. She knew and understood their beauty.  I didn’t and neither did my sisters.

I hated the fact that she expected me to wear something weird that didn’t exist where we lived, and I hated that she was making me things that we could have easily bought readymade. Her designs were out of my world. They were strange for me and uncomfortable. She knew and understood their beauty.  I didn’t and neither did my sisters.

Until now — now that I have learned to stitch, I want to make things for my daughter with my own hands, and she has the same reaction as I had with my mom. And I now understand that my mother was not trying to save money by stitching my clothes herself. She wanted me to have clothes that were her creation only for me.

Yes. Sometimes it takes a mother to understand a mother.

My mother was an enigma for me. I adored her on the one hand, and on the other I never understood her, and so I found myself always on the defensive. I couldn’t easily accept what she wanted nor what she said.

And, in my quest to understand her better, and to know her, I stumbled upon her sacred territory — her silver-colored small cupboard. In a way — and I am still convinced till today — that the most real part of my mother is hidden away somewhere in that cupboard.

I can say that much with confidence because, somewhere at my parents’ house I left behind my own memories of who I was before I came to live with my husband in another country, with a man I loved but was just learning to live with. Isn’t that what women do when we get married? Somewhere, we leave behind our old free selves tucked away in a secret place, hoping no one ever stumbles upon it. For it is ours — and only ours.

My mother’s memories were locked away in that cupboard. It belonged to her alone and held only her things. Nobody was allowed to touch it or open it — ever. The keys were tucked into her waist on her sari, at any given time of day or night. It contained her most precious memories, her photos from when she was a small girl to the day she got married. All those memories of her as a dreamer, and as a young girl and then a woman, were tucked away safely in it and in due time I made it my own secret haven. Every time I was in trouble and found myself cornered, that cupboard became my solace.

You have to understand that you could hear my mother wherever you were in that sprawling bungalow where we lived — and all because of the clinking of the keys that she tucked into her waist. It was a signal of her presence for us. There were many nights we fell asleep to the familiar and comforting clinking, knowing she was somewhere nearby.

You were absolutely prohibited to wake her up unless it was a matter of life and death. Life, because sometimes, a baby needed to be born right then, and death, in case you woke her up for no apparent good reason. But this rule was my favorite time of the entire day because it gave me the opportunity to sneak those keys from her, lock her bedroom door and finally enter the world before she became a wife or a mother.

I would go through the memories with a fine toothcomb. I was fascinated and obsessed with this young girl who wore short skirts and beautiful dresses. She had a habit of drawing hearts when she wrote something. (I’ve realized that I have the same habit and maybe  I subconsciously picked it up from her. But now, strangely even my daughter does it).

The thing that most fascinated me most was that in all those pictures, she was laughing, smiling and had a relaxed and carefree air about her. It was not something that I saw in my mother everyday. I rarely saw her laugh whole-heartedly.  She would smile sometimes when she was in the company of friends or when she played with small children. But most of the time, her life was so hectic and busy that I don’t think she ever had the time to stop and smile.

I marvel now that after all the hard work she did, taking care of her two clinics, her four daughters, my father’s social life (and her own), that she would still manage to find time for her favorite hobby —  stitching through the nights. Maybe that is the reason that I never had enough of those pics of her of when she was in college, or with her family as a young girl, and of her scent on the sarees that she had tucked away neatly in that cupboard. Her sky blue diary was in there, that she wrote in when she was in medical school — and a beautiful rope of red and gold beads in the locker.

My most precious memories, till my daughter was born, was of this young woman that I wanted to meet for myself. I wanted to be her. I wanted to be a part of that life of hers, when she didn’t have to take care of people but be her own free self — an extremely intelligent, hard-working, beautiful young woman who had the world in the palm of her hands and who laughed carelessly…

Today, when I look back to those stolen moments, going through her things and her diaries, I sometimes wish I hadn’t tainted her world. Maybe it was her safe haven too, which she, every now and then, went through the memories of when she knew what she wanted. Maybe I defiled that sacred place that was not mine to enter.

But it did have a huge impact on me. Those afternoons going through her things, that was her world she inhabited, the books she read, the music she listened to… I learned all that and made it mine.

While till today, my relationship with my mother can be strained, and I never became who she expected or fulfilled her maternal expectations, in my own way I became a woman who could smile even against all odds. Her sacred hidden world made me realize that I would never let anybody steal that smile and that desire to do whatever I wanted.

I have tried passing that same irrepressible nature down to my daughter. To be strong, but feminine at the same time. To smile against the odds, and still come out triumphant.

That is why I strongly believe that strong mothers always create strong daughters who know how to take a stand against the odds and stand on their own. They know how to nurture and how to keep things together.

Over the years, there were so many occasions when I could have just stopped fighting the odds. When it was easier to give up and say, ” I can’t do this anymore.” But even if I might have said it, I NEVER did it. The only thing that stopped me from doing it was the thought of the scent of my mother in those beautiful sarees and the blue diary pages full of her dreams and little hearts tucked away in that silver colored cupboard.

I want my daughter to have that feeling too that when she gets married. I would want her to wear the green yellow saree, with the huge nose ring even if it is not in fashion like I did. She should want to leave behind the world she knew, and happily enter the new one for the sake of the one she loves. I know she will renounce her old dreams voluntarily to make way for new ones.  Like I did. And my mother before me. 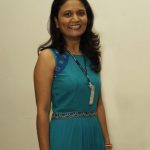 Aprajita Puri loves to write and is a freelance translator. She is settled in Italy and lives in Venice. For her happiness is synonymous with food. She loves to write about love and food. You will find her cooking when she is not busy exploring Venice.