Born in New Delhi, India to a Sikh Punjabi family, Nikki Chawla came to the United States when she was two years old. Nikki, in her formative years, struggled to find her identity as her family moved around constantly. After growing up in Flushing, Queens, she moved to Long Island during her high school years where she had to learn to assimilate in an environment where very few people of color resided.

Fast-forward a few years, she’s a former Kindergarten teacher with two masters degrees, turned stand-up comic and actress even though her family thinks she’s crazy! She has been doing stand up comedy for a while now and is currently preparing for her upcoming tour East Meets Midwest.

The East Meets Midwest comedy show is ready to enlighten folks across the country with a stop at Carolines on Broadway in New York City on April 5th. The tour features four Indian-American comedians Nikki Chawla, Rishi Mathur, Raghu Adibhatla, and Prateek Srivastava. 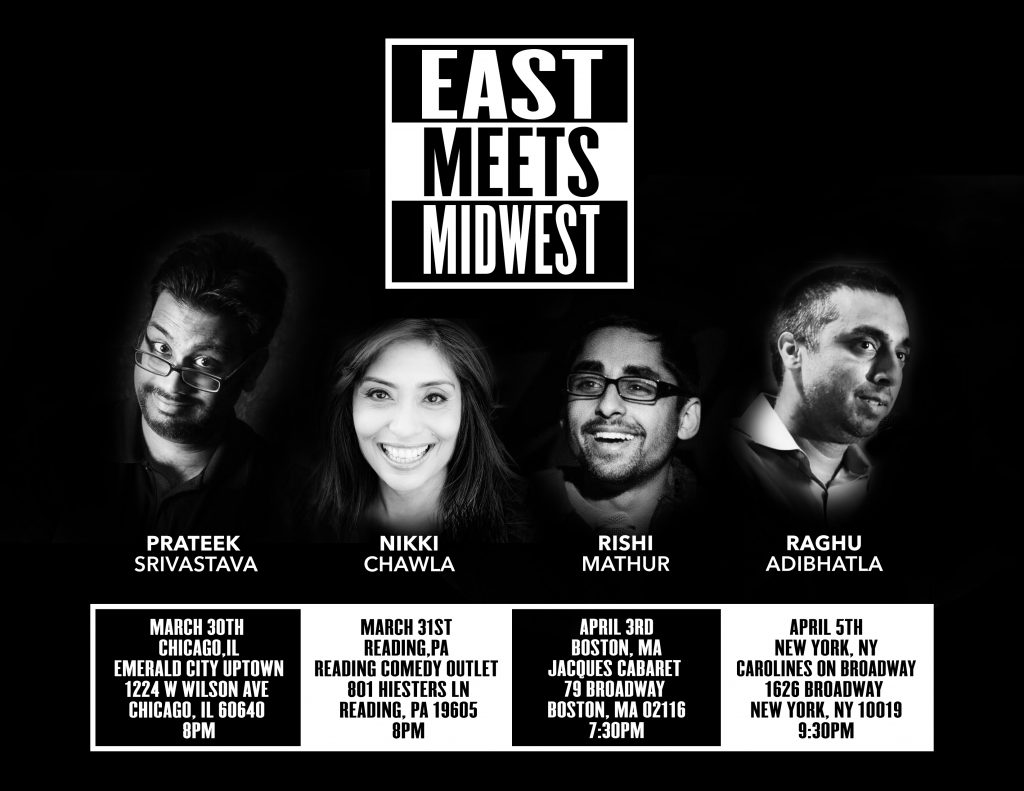 To reserve a ticket for the tour, visit Carolines.com and use promo code FUNNY for an exclusive discount.

As I spoke with Nikki, I asked her a few questions about her past, present, and future.

How did you get involved in stand up comedy?

As a child, I would have pretended tea parties with imaginary guests in my bedroom. As an adult, I would sit in the park and people-watch while I sip my coffee and learn about human behavior. We are all characters! These instances in my life led me to this journey.

It was at my first comedy class taught by Tom Shillue, a standup comedian, actor, author and former correspondent on The Daily Show and featured on Comedy Central. Tom helped me take the”funny” in my life experience, write a premise and punchline. As nervous as I was the very first time in his class getting up and telling a joke, it was liberating! I was also fortunate to take a workshop with Paul Mooney, comedian, social critic, writer for legendary outstanding comedian, Richard Pryor, and also known for his appearances on the Dave Chappelle show.

In his class, she won a comedy contest and was given a guest spot at Carolines on broadway. She also worked with other comedy teachers such as Steve Rosenfield, of The American Comedy Institute and Tommy Koenig of the Comics Studio, Comedy Central National Lampoon star and of the one man musical “Baby Boom Baby”. Nikki performs at NYC clubs, corporate, and private events. Nikki also did improv shows and standup at a cabaret club called, Don’t Tell Mama and ironically her mom did not know!

Nikki felt like she lived in two worlds and constantly had to figure out where she belonged or fit in. At home, she was a traditional girl who ate roti and chicken makhani but as soon as she stepped out of the house she was a different person, eating hamburgers, and French fries at the school cafeteria. She wanted to fit in with all the other kids instead of bringing a Smurf lunch box that had two pieces of bread with masala aloo.

“My mom would pick me up from school wearing her chiffon sari and I would always tell her to cover her stomach. I absolutely did not want anyone to leer at my mom’s beautiful figure. As we walked home, I held her hand for dear life as cars would pass by blasting the music of  Run-DMC, Beastie Boys, Sugar Hill Gang and Public Enemy. We’d reach home to the sound of Lata Mangeshkar, Kishore Kumar, Mohammed Rafi and Mukesh. I didn’t know which world I want to belong to. They both were different.”

Throughout her childhood, Nikki’s orthodox Sikh family (like most Indian families) were very strict.  She followed two main rules: 1. go to school and 2. come straight home, to prepare for school. While all the other kids were in the after school clubs, Nikki was home doing homework and studying like a good Indian girl that she was expected to be. She had very few friends and missed living in Flushing where there were diversity and familiarity.

As an adult woman, she was expected to have an arranged marriage.

“I was torn between making my parents happy and making myself happy. Their acceptance meant the world to me. My father had heart issues and his happiness meant more to me than my own. His wish was to see me happily married to a nice Sikh man and I fulfilled his wish.”

Unfortunately, her marriage did not work out. Ultimately, the juxtaposition of her divorce and the loss of her father were the breaking points in her life. She did not know where to go from there so she ultimately became a Kindergarten teacher. Her healing process involved going out and discovering new things including getting a Masters Degree from the Actors Studio drama school, While she lost one love, she gained two more loves; acting and stand up comedy.

What are some topics you talk about on stage?

I don’t think people talk about divorce enough. We are not raised to be vulnerable and I wanted to share my story to inspire others who were in a similar situation as me. Any situation that is deemed bad or scandalous is always hush-hush and I wanted to bring these topics to light. All the pain and the blocks that were in front of me made me stronger, all my fears made me stronger. She was afraid because they were taboo topics. She didn’t mention divorce for years on stage. She wanted that acceptance – how do you dress on stage- I dress in an outfit that makes me feel comfortable yet classy.

What is it like to do acting, standup, modeling teaching all at once? How do you choose to prioritize?

God is my guidance. I wake up in the morning and remember God.  I listen to kirtan, knowledge, motivational music. Then I make a list of things that I need to do. Making a list helps me alot. The first few things I list are top priority.

What is your process like to writing a stand-up?

I have a premise and a punch line and I expand on the premise. Not to get too technical, comedy is like music — there is a rhythm to it and when you start listening to the audience’s response, you respond and tweak your performance to make it work. You get more experience by writing every day and getting up on stage every chance you get. The more you do it, the better you become because like anything, it is all about practice, your belief and your trust in yourself. That’s what gets you across the finish line. If you don’t believe in yourself, the audience will feel that and lose interest.

The relationship between the audience and the performer is synonymous: they are rooting for you! If you are enjoying yourself, they will join in that fun! They want to be happy with you. I am able to connect with my audience because I believe that anything I do is seva (service). Being an artist to me is seva.

What are you trying to accomplish on this tour?

“To have fun! All four of us may all be brown but we come from different walks of life yet share a commonality. We want to share our individual experiences by enlightening our audience with humor. We made it a point to include more female comedians, such as Yamaneika Saunders, Peaches Rodriguez, Penny Oswin, Katie Meiners, and Reena Calm. I am honored along with my tour mates to make these comedy lineups more inclusive for women.”

How do you prep?

“My training from the Actors Studio drama school has given me valuable tools to prep. I do the Alexander technique relaxation exercises followed by Linklater voice warmups. I have my favorite playlist of songs which I dance to and envision having a fantastic show!”

Can you tell us something funny?

“Every time I had a show, I would tell my mom I was going to the library.”

“My mother.  She is the strongest woman in my life that has made me who I am today. I love her with all my heart.”

Who are your favorite comedians?

“I grew up watching Lucille Ball and Carol Burnett reruns. They were female pioneers in the comedy industry. There are many comedians I admire, to name a few; Richard Pryor, Ellen Degeneres, Leslie Jones, Russell Peters, Wanda Sykes.”

What challenges do you still face?

“Time management. I live an industrious life and with that comes a responsibility to balance all the wonderful things I do. I think this is a good challenge to have!”

What do you do to overcome them?

“Whether I am at the Gurudwara or at home, I find time to be in silence as I believe that a peaceful mind gives you strength to overcome any obstacle.  God is my guidance in everything I do and I talk out loud to my father and my sister who are in heaven, they give me answers and their love.”

To reserve a ticket for the tour, visit Carolines.com and use promo code FUNNY for an exclusive discount.