March for Science Los Angeles: What We Can do to Defend Science

All images in this post are courtesy of Chandrima Chatterjee.

Some days are good. Some days are bad. It’s been over a year, thankfully, since my father’s third and fourth strokes, the last of which left him wheelchair-bound and unable to speak in full sentences. All four strokes were in his left frontal lobe and surrounding areas, growing more intense with each incidence.

Raised mostly by his grandparents and living in an orphanage when he was barely five-years-old, he was always at the top of his class, a genius with multiple professions: a metallurgist, businessman and lastly an accountant. He was the picture of an immigrant success story—he came to the United States with nothing but a Hamilton bill in his pocket and a scholarship. By the age of 45, he was living, in what his own mother (who emigrated here because of him) called our modest suburban home, “a mansion”, when she wrote to relatives in India.

He sent money home to help his nieces and nephews attend schools. He helped the educational system here by donating to his alma maters, every single year, something I only found out after his strokes when they came asking for the annual contributions. Before his third stroke, my father was in the middle of writing his biography with me, but already had suffered two strokes that took aim at his language center.

As most therapists and doctors tell me, he is an exception to the rule. Most people would lose their speech to aphasia and not relearn it to 99% as he had. Most people would have died by their fourth. He is an exceptional person. To this day, as a part-time caregiving assistant (I’m not a real caregiver), I spend days on end waiting for him to string together more than four words. Some days all he says to me is “hey” and follows it with a gesture. “Hey” can mean anything from “I need to go to the bathroom” to “How is your job?” to “When are you having a baby?” to “What time is it?”

For a man who once lived inside books, realizing that he can no longer read without getting a headache, or the reality that most of the time he is trapped inside his own head, is mind-numbingly painful. Yet, we continue on. My mom says, “What other choice do we have?” 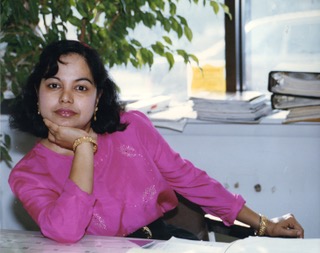 [After pursuing a more education in the United States, mainly because she was overqualified for various positions, Chandrima’s mom eventually became director at one of the few EPA-certified hazardous waste disposal management companies in the NYC area.]

The immigrant success story is also a lonely isolating one. In exchange for a lifetime opportunity to develop your skills and contribute to the world, you lose your network of family and friends. You reach for the stars but you are mostly on your own in a way U.S.-born citizens cannot comprehend.

They are a modest couple living a modest life. But behind what meets the eye is the epitome of a scientist’s immigrant story of the baby boomer generation. My father first came to the U.S. in the 1960s on a work visa as part of a training collaboration between U.S. Steel and Tata Steel. He was still quite young, but the trip was inspiring enough that he pursued a Doctorate of Science in Metallurgy soon afterwards, at Washington University.

My mother, almost ten years younger, was in India. They had not yet met. Her PhD program in Physical Chemistry began years later at the Indian Institute of Technology. Part of their arranged marriage was that she would finish her studies before joining him in America. By then, my dad had been working for Becton Dickinson on a Department of Defense grant. He was essentially an employee of the U.S. government, a thread throughout his three careers.

In many ways, my mother’s career was on the opposite end of the spectrum. Her education, however, didn’t end with her PhD. She had to go back to school here in the United States, partly because she was overqualified for many of the available jobs in the area. 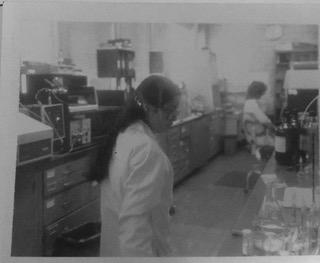 I’ve never met someone who was able to multi-task as well as her. She was back in school, getting her Masters in Organic Chemistry, juggled raising a newborn and an internship at Schering Plough and 3M. Afterwards, she was a certified Environmental Chemist for almost 25 years, rising from supervisor to laboratory manager and finally laboratory director at one of the few EPA-certified hazardous waste disposal management companies in the NYC area. They handled everything from contaminated soil to waste water to dredged products to consumer waste and construction debris. Her job, if you boil it down to its basics, was to make the hazardous waste safe to dispose.

As a chemist, she conducted a lot of heavy metals analysis by ICP Atomic Emission Spectroscopy and often worked with lead, cadmium, chromium-6, mercury and polychlorinated biphenyls. I often cringe at the mention of these—after all, she found my work with biologicals just as unsettling. But these are all serious contaminants that the public could be exposed to by companies if not treated properly. For instance, PCBs are manmade chemicals once widely used in electrical equipment as lubricants and coolants. They are known carcinogens and though they were banned in 1979, they are still found in the environment due to their very slow rate of decomposition. In 2013, the company she worked for managed and treated 3.4 million tons of material, of which 98% was beneficially reused.

Her job was important to the welfare of the community and the country’s environment. She worked with samples from NJ, PA and NY and, ensured that after fixing them, they were safe for reintroduction to the earth at disposal sites across the country. Clean water was, and still remains, one of her most important lifetime commitments. It’s not a surprise to her to see N.J. still having to work hard at chromium reduction in public water sources, but it is dismaying.

Overall, she saw industry commitment to a cleaner environment increase throughout her career but she’s less hopeful about the near future now. Though she did not work with the EPA directly, they mandated and certified the processes and safety guidelines and act as a watchdog to ensure companies comply with the waste disposal procedures.

You may be surprised to learn that both my parents were and still consider themselves Republicans. Their voting records don’t always reflect it but they hold too many ideals of conservatives, just as many immigrants do.

My mother retired early. My father retired late, after two more careers. They did not get to pursue their dream of traveling around the world. They went on four vacations together my whole life and saved money to ensure a better life for the others. They now live a quiet retirement struggling to provide for themselves. Same story as most retirees.

There’s no rule that scientists are all Democrats. There’s no rule that immigrants can’t contribute to the progress of this nation. On the one end there is my father who believes in the natural resources of this nation. On the other end is my mother who believes in ensuring that those extractions and products are dealt with in a safe manner. There’s no reason the two cannot work together balancing our natural resources with a safe future for the public. It’s all about maintaining a perfect equilibrium.

[Read Related: Why it’s Important for Every Immigrant to Make Sense of Their Story]

On April 22nd (Earth Day), I’ll be joining the March for Science Los Angeles to stand up not only for science, but for people like my parents. While science may be political, it is nonpartisan. Scientists and non-scientists, U.S.-born citizens and immigrants, democrats and republicans must come together to defend science for the betterment of our country and our planet. 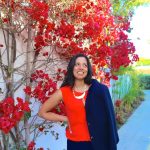 Chandrima is a public health biologist, specializing in cell and molecular biology at the University of Southern California. An avid storyteller in the world of non-profits, soccer and health sciences, she is currently enrolled at UCLA in Media Studies. She’s aiming to increase the awareness, and accessibility, of treatment/prevention of communicable diseases on a global scale. Always looking for the untold story of marginalized communities, and traveling while writing, especially if there’s research and volunteering involved, is what Chandrima loves to do in her spare time.