He’s hilarious, dorky, eccentric, bearded, and has great stories to tell. If you thought of your cool brown dad, think again. Well, actually you’re pretty close (except he’s not even a dad).

You probably know him as the Tumblr account radbrowndads that blew the Internet away, but nowadays, Ahmed is up to some cool new things. Specifically, hosting an acclaimed podcast at Buzzfeed called, “See Something Say Something,” which explores issues and musings related to being Muslim in America, like jinns, living in Trump’s America, and Zayn Malik. The podcast has gathered a humble following and features guest speakers that range from comedians, politicians, college students, and wait for it…Ahmed’s dad.

This past week, I had the opportunity to interview Ahmed and learn about his story, from his #woke high school days, opinion on minions, to his life goals.

Ahmed was raised in Michigan as the son of immigrants from Pakistan, two doctors who acknowledged their economic stability but never failed to remind him that he was privileged.

Reminiscing, Ahmed remarks, “I think it’s important for privileged people to recognize and name that they have privilege.”

His parents, both active in their local Muslim community agreed, encouraging his passions and supporting him all along the way. His family’s social background also ranges from two different spectrums: business and rural, and city and urban. Combined, these differences teach him how diverse culture can really be. Later on, this realization helps Ahmed polish his identity as Midwestern and Muslim.

When I ask Ahmed about his time in high school, he’s silent for a moment, then responds with “angry.” When I ask him to elaborate, he chuckles softly.

“I was interested in learning about race and social issues, always navigating different paths,” he says.

He tells me about his time spent in Model United Nations, science fairs, and his dream of becoming a doctor, like his parents. He mentions that he was always aware of what was occurring in America, composing journal entries, involved in politics, and was very anti-establishment. He also had long hair to prove it.

The time comes for Ahmed to decide what he wants in life, and he becomes hesitant about pursuing medicine. He considers politics and working in academia, always interested in working in the “real world.” Ahmed considers blogging, but it is never given serious consideration until his Tumblr account takes the internet by storm, showcasing vintage hip photos of well, radbrowndads.

In 2014, Ahmed begins as a writer for Buzzfeed, and writes about topics from social commentary on his Muslim identity to Pokemon and memes. When Donald Trump is elected as the GOP candidate, Buzzfeed’s editor-in-chief Ben Smith and his audio team reach out to Ahmed with the idea developing something based off of what he does for the company, and thus “See Something Say Something” was born.

Ahmed is encouraged to work as the host to represent Islam in a new way, and he takes on the challenge. When asked about it today, Ahmed happily remarks,

“Buzzfeed invested in me, and I get a lot of respect from the community that Buzzfeed gave me.”

At the show, Ahmed works with a team whom he regards as “brain trusts,” as they’re always fueling his creativity, coming up with ideas, and having important conversations.

“Without producers, I’m nothing,” he says earnestly.

A typical day in the life for Ahmed consists of showing up late to work (he swears it’s solely because of his South Asian ancestry), thinking about things, writing, meeting with people, recording, and getting his work shown. To him, a good reputation at work is important. Even more important than video games.

Today, he sounds tired but excited. He’s been thinking about his trip to the Metropolitan Museum of art in NYC, particularly an exhibition on Mughal and Moorish art.

“It’s nice to see a continuum of Qurans and prayer rugs because they make me think about the continuity of Muslim culture today.”

I can hear him smile.

We go on to play a “See Something Say Something” favorite rapid-fire titled “Halal or not,” where I present topics and Ahmed goes on to give his personal opinion on whether he likes it, deeming it “halal” for himself, or not.

First up, frozen breakfast food. Ahmed groans jokingly, and immediately answers “not halal.” He defends himself by saying that breakfast only takes a few minutes to make, so there’s no point in buying any. “Just eat a banana,” he adds.

Ahmed’s strongest opinion is on the minions, whom he declares are not halal.

“Despicable Me is fine, but I feel like they were designed to be sold and shoved down your throat.”

When asked to elaborate, he adds. “I look at them and I feel nothing.” I want to know … does hatred count as “something?”

The second topic is Malala Yousufzai, who Ahmed decides is “super halal.” He discusses the time he watched her receive an award, and she immediately reminded him of his mother, a tireless advocate of education and feminist.

On Kanye #2020, Ahmed has conflicting opinions and decides to take a position of “makruh” or dislike:

“I would’ve said yes a while back, but recently he met with Donald Trump. I miss the ‘George Bush hates black people’ Kanye.”

“He broke my heart.”

I can tell Ahmed is getting emotional thinking about the old Kanye, so I ask him about his life goals. After joking about my “aunty question,” his tone turns somber.

That’s why to this day, he plans his life in two segments: firstly, to elevate the dialogue between Muslims and non-Muslims through “See Something Say Something,” and secondly, to write a book.

When asked to give some advice to brown folks with similar goals trying to make it in media, Ahmed sternly replies, “just keep writing.” Often times, he is contacted by struggling writers, and he reminds them that there is always space for cultural and Muslim content creation.

Ahmed also wants to remind folks to always remember that everyone has their own “Muslim experience,” and when they tell their story, they should always mention that it is solely theirs.

Ahmed firmly believes that it’s important to read a lot, listen to good music, and to never get complacent, as those values will always help you succeed in life. He also wants you to know that video games are underrated, and lastly, that if you see something, you should always say something. 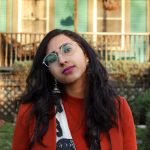 Duriba Khan, or “D-Dawg,” is a bratty writer studying advertising, political communication, and pre-law at The University of Texas at Austin. She is half-Pakistani and half-Indian and currently resides in Austin, Texas. When Duriba is not watching 1960s Bollywood films, she enjoys taking long, romantic walks to the refrigerator. Duriba also feels uncomfortable writing about herself in the third person. For more of Duriba’s work, check out her blog.