The following post was originally submitted to BrownGirlMagazine.com and published to HuffingtonPost.com.

Too often, mental health issues are viewed as personal problems, rather than the reflective of (or perhaps directly the result of) greater social and political injustices. I think it’s one of the reasons mental health problems are not taken seriously enough. But “the personal is political.” For centuries, sexism, racism, and other forms of discrimination have crushed spirits.  Right now, Islamophobia is hurting all of us South Asians, Muslim or not.
On a very basic level, South Asians – from Hindus and Sikhs to atheists – are being dehumanized because of how we look. This is a burden we all share, not just Muslims.
One 2012 study reveals how Islamophobia negatively affects the mental health of Muslims worldwide, ranging from increased feelings of anxiety to depression. What’s more, the study shows one does not need to literally face discrimination to experience its negative effects; just the knowledge that society fears and shuns those who look like you can affect your psychological health. These findings demonstrate that Islamophobia negatively impacts the mental health of not only Muslims but also Sikhs, Hindus, and even atheist South Asians.

“I worry that people will fear me; that they’ll disregard my navy blue United States passport and my Western values and see me only for my skin color, hijab, and last name. I worry that they will unjustly equate me with the Muslim people who have taken innocent lives and have tarnished the reputations of millions of American Muslims,” Amara Majeed, 17, said via Bustle. 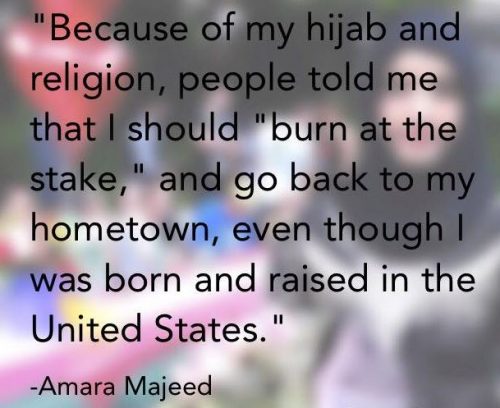 Discrimination is also taking its toll on children, leaving effects that last into adulthood. For example, a 2014 study conducted by The Sikh Coalition reveals that two-third of Sikh children donning turbans are bullied, while 50 percent of all Sikh children experienced bullying. Bullying can cause severe mental health damage—its effects can even be worse than abuse.

[Read Related: Brown Girl of the Month Amara Majeed Takes Over the World One Media Outlet at a Time]

Gunita Kaur, who is a lawyer by trade, said this began taking its toll on her at the age of nine.

“I was nine years old when I became painfully aware of the fact that Sikhs living in the United States are at heightened risk of experiencing brutality. Living in New Jersey at the time, my family visited Ground Zero shortly after 9/11 to see the site and pay our respects to those who lost their lives.
I vividly remember the smell of the ashes, the omnipresent dust and debris, the solemn, grim, looks on everyone’s faces—but most vividly I remember dirty looks directed at my dad, who is my hero. A person who adds enormous value to the world and who did not deserve the targeted stares of negativity and suspicion aimed at his turban.
I remember feeling several different emotions: I was confused—confused as to why people felt entitled to judge someone they didn’t know. I was angry – angry because something as seemingly harmless as a dirty look in fact stood for disgust, discrimination, and unfounded hatred. I was sad—sad because even at such a young age I understood that intolerance and ignorance are difficult problems to overcome.” 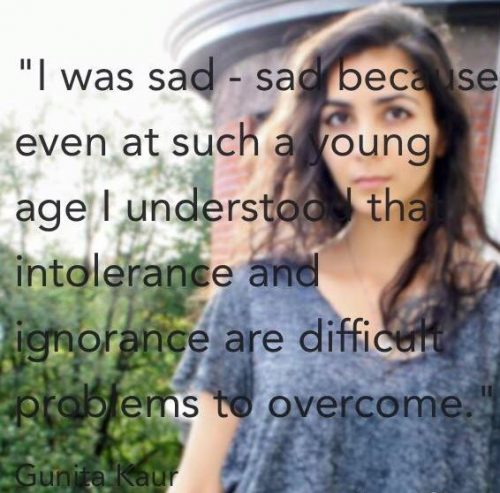 What’s worse, many don’t feel they have the right to talk about what they’re going through:

“What I’ve seen in the Muslim community psychologically is feeling a denial of emotion, feeling very disconnected that we can’t display this emotion because no one will believe it. No one will tolerate it, no one cares that we’re upset,” said mental health professional Kameelah Rashad in an interview with the Huffington Post.

Excessive emotional repression is dangerous to mental health.
So, what can we as South Asians do to help?
Now more than ever, South Asians need to start talking about mental health problems, both within and outside of our community. Many young people feel scared to talk to others outside of our community out of genuine fear. They should feel comfortable looking to their own for support and advice without fearing stigma.
More so, South Asians who are not Muslims need to stand up for those who are. I write as someone who currently identifies as agnostic but was brought up Hindu-Gujarati. If you choose to hold on to old resentments, you’re engaging in the hatred that fuels racism against us all.
Resources such as the White House Anti-Bullying Campaign For Asian Americans, Muslim Wellness Foundation orThe Sikh Coalition are helping young people deal with Islamophobia, but I’d love to hear from you as well. I am collecting stories to normalize mental health issues in the South Asian community for my very own The Desi Wellbeing Project and I’d love to feature your voices, resources, and suggestions. I aim to encourage and celebrate those South Asians who cultivate wellbeing. But I also want to start to stress the link between the greater social issues – past and present – that are contributing to high rates of emotional distress in our community. Most importantly, I want to also help open up a conversation about how to deal.
Tell me about your experiences. I’d love to know how Islamophobia affected you growing up and how you’re healing. If you’re young, open up about what you’re going through. Tell me how you’re coping. If you’re an organization or a therapist, give me your tips. Let me know how you help. You can email me at thedesiwellbeingproject@gmail.com.

Sheena Vasani graduated with a degree in International Relations from UC Berkeley.  She is a self-described compassion, gender liberation, and mental health activist, and has worked with various social justice initiatives, including V-Day.  In her free time, she ironically enjoys exploring various religions, cultivating her creativity, and cuddling her kitten. You can follow her on Twitter and on her personal blog.