“Kabhi Khushi Kabhie Gham,” universally dubbed “K3G,” is one of the most successful films ever made in the Indian film industry. It has generated immense revenue while also espousing some of the most culturally regressive ideas that can be gleaned from any deeply patriarchal society.

Upon its release in 2001, The Times of India gave the film booming applause, dubbing it a “complete commercial banquet” that would make the audience feel alive.

Similarly, it was assigned the status of the “perfect Hindi film” in Fuad Omar’s “Bollywood: An Insider’s Guide.” Critics have also observed that the film was written quite deliberately to elicit nostalgia for the motherland from expatriate viewers. However (much like the film’s title), while “K3G” was a commercial blockbuster with vibrant dance sequences and gratuitous filmy drama, it was also a crushing disappointment with respect to the debilitating patriarchal constructions that furthered the plot along.

For the socially conscious, “K3G” can serve as a poignant warning of what the perpetuation of patriarchal ideologies entails—it emotionally constipates our men and strips our women of their agency.

And, for the less enlightened collectivity, “K3G” is a dangerous exposition. It packages adherence to unreasonable patriarchal demands as praiseworthy filial obedience. It presents marriage as a thinly veiled serfdom. It characterizes the West as an insufferable territory of promiscuity and counter-traditional lifestyles.

On one end of the spectrum, one can purport that the film serves as a deliberate commentary on how damaging patriarchal traditions can be through its destruction of arguably the most intimate tenet of human existence—family life. And, on the other end of the spectrum, this film is the impetus through which these damaging ideologies find legitimacy vis-à-vis catchy tunes and A-list actors.

To begin, the Raichands epitomize the height of patriarchal success: wealth and power. They have a sprawling estate, private planes, and foreign-educated children. It is a grand paradox that while working to elicit nostalgia about the motherland, the film offers viewers a family that is so severely removed from the realities of South Asian life with its excessive luxuries and dance parties with all-White background dancers.

The opening of the film immediately juxtaposes the disparity between female and male expression. While audiences become acquainted with images of Nandini Raichand (Jaya Bachchan) lovingly embracing her son Rahul (Shah Rukh Khan), Yash Raichand (Amitabh Bachchan) confesses his inability to express love to his children.

This expressive inability is one that runs amok among men in patriarchal cultures. Patriarchy reserves emotional expression to feminine vessels, as this is within the realm of nurturing and care that has been historically attributed to the purpose of female existence.

Conversely, work and aggression are deemed to be masculine characteristics. This gender binary is the reason why men like Yash have difficulty telling their sons that they love them. It is why countries with patriarchal foundations are willing to spend more money on war than on healthcare (a nurturing industry). This emotional deficit ultimately causes Yash’s family to fall apart after he boots Rahul from their home for marrying a poor Punjabi girl (Kajol) from Chandni Chowk.

Despite his teary-eyed departure, Rahul remains true to the requisite emotional repression of his male form for a whopping 10 years and even relocates to London with his new bride.

The period between Rahul’s tearful departure and his even more tearful return home makes room for illustrations of another issue borne from patriarchal institutions: the policing of female expression.

Nandini is wholly denied by her agency throughout the film, as her husband’s word is the authoritative decision in all matters—including the sending away of her eldest child and her new daughter-in-law. 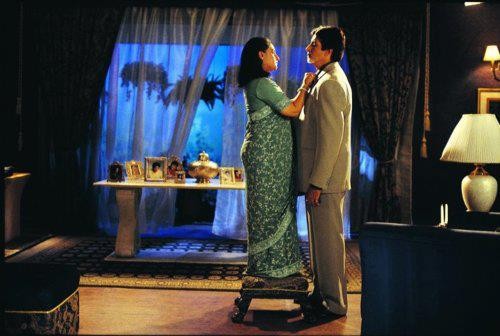 As the film pans to London, where Rahul and Anjali live with Anjali’s younger sister Pooja (Kareena Kapoor-Khan), it sets up a problematic and deliberate dichotomy between Eastern and Western life in terms of feminine expression.

Pooja’s character is depicted as promiscuous and headstrong; She wears tiny clothing, objectifies men, and challenges cultural norms left and right. This is how Western life and transnationality is perceived from the vantage point of the preservationist South Asian perspective—an outlook that is, once again, informed by the patriarchal belief that a woman’s behavior should be gentle and her sexual prowess repressed.

Resultantly, Pooja’s body is heavily policed throughout the film and is constantly referenced as a physical manifestation of contra-traditional values.

It is through this juxtaposition that writer and director Karan Johar seeks to elicit nostalgia for the homeland (complete with a “Vande Materam” chorus performance at a British school recital!) because in “K3G’s” India, women’s bodies can be regulated without much resistance and the patriarchy reigns freely.

Demonstratively, although Pooja is introduced to viewers as a cultural defector, she nonetheless falls madly in love when Rohan (Hrithik Roshan) swoops in from India to tame her and place a dupatta over her head in time for morning prayers.

A significant turning point is made, however, in the film’s closing scenes with respect to feminine expression.

Nandini’s “Bas keh diya!” (I said enough!) scene illustrates her first attempt in the entire film to stand up to her tyrannical husband, albeit after 10 years of allowing him to keep her son away from them. It is the one redeeming scene in this so-called “perfect Hindi film” and it is sure to give any South Asian woman the urge to stand and slow-clap.

Rahul eventually returns home after this climactic spectacle and he and his father reconcile with an outpouring of repressed emotions. Curiously enough, Johar’s famous closing tagline that is shown before the credits roll is, “It’s all about loving your parents.”

Except, it’s not. To the socially unconscious, it’s about blindly respecting an arrogant patriarch at the expense of destroying your family. It’s about eulogizing oppressive traditions by equating a successful home with one in which a man has authority over all matters in a home he shares with both his wife and his mother. It’s about perpetuating the message that South Asians settled in the West are cultural deviants in need of restraint via repressive traditional strictures. It is all that can go wrong with Bollywood and it is what allows these mentalities to thrive in South Asian societies, thereby harming the women who still live in them.

Bas keh diya. We’ve had enough of that.