Feminist spoken word poet and author of “Milk and Honey” Rupi Kaur caused major waves of change this week when she fought against Instagram for censoring a photo of a woman menstruating — and won.

The now infamous photo, posted three days ago, shows the Sikh from Canada, Kaur, lying on a bed in sweatpants with her back to the camera. It sparked controversy for a singular reason: two red period stains. Kaur posted the photo on her Instagram account and website as part of a photo series in collaboration with her sister, Praubh Kaur. The photo series shows various situations familiar to all women: debilitating cramps, around-the-clock bleeding, and the inevitable laundry stains. In an effort to combat stigma that many cultures still associate with periods, Kaur emphasized the desperate need for women and men to accept them as a natural and beautiful life process on her website.

i bleed each month to help make humankind a possibility. my womb is home to the divine. a source of life for our species. whether i choose to create or not. but very few times it is seen that way. in older civilizations this blood was considered holy. in some it still is. but a majority of people. societies. and communities shun this natural process. some are more comfortable with the pornification of women. the sexualization of women. the violence and degradation of women than this. they cannot be bothered to express their disgust about all that. but will be angered and bothered by this. we menstruate and they see it as dirty. attention seeking. sick. a burden. as if this process is less natural than breathing. as if it is not a bridge between this universe and the last. as if this process is not love. labour. life. selfless and strikingly beautiful.”

Though the photo showed no depiction of nudity, self-harm, acts of violence or “illegal content,” as forbidden in Instagram’s community guidelines, the company removed the photo shortly after it was posted citing it was in violation of its regulations. 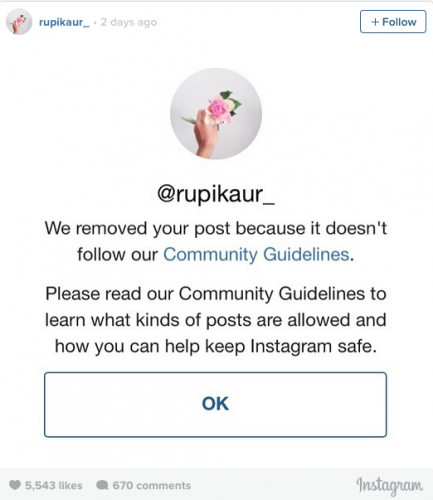 Kaur reportedly reposted the photo to Instagram, only to have it removed a second time. She did not stop there and instead also published the so-called controversial photo to her Facebook page  two days after it was initially posted on Instagram. Her Facebook post, now shared more than 12,000 times, came with a lengthy outcry for ideological and media censorship reform that garnered massive public support.

thank you, Instagram for providing me with the exact response my work was created to critique. you deleted my photo twice stating that it goes against community guidelines. i will not apologize for not feeding the ego and pride of [a] misogynist society that will have my body in an underwear but not be okay with a small leak. when your pages are filled with countless photos/accounts where women (so many who are underage) are objectified. pornified. and treated less than human. thank you.

Some women aren’t allowed in their religious place of worship. Out of their homes. To do certain things. And are told they are sick. As if the period is a common cold. Yes. This is here in North America. I have been hospitalized many times because of issues associated with my period. I have been suffering from a sickness related to my period. And ever since I have been working so hard to love it. Embrace it. Celebrate it. Even though, it’s given me so much pain in the past few years. and they want to tell me I should be quiet about this. That all of this we experience collectively does not need to be seen. Just felt [secret] behind closed doors. That’s why this is important. Because when I first got my period my mother was sad and worried. And they want to censor all that pain. Experience. Learning. No.

Their patriarchy is leaking.

Their misogyny is leaking.

We will not be censored.”

The next day, Instagram reversed their decision, claiming in an email apology, shown in the photo below, on Kaur’s Instagram account that a team member “accidentally” removed the picture, but it has since been restored. 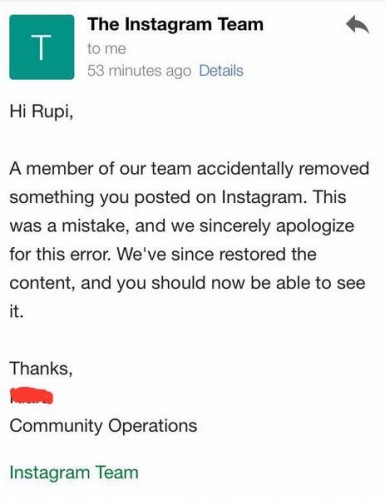 In a gallant move against the suppression of creative expression and women’s empowerment, Kaur rallied the forces to successfully challenge the notion that menstruation should not be considered vulgar or “mature” content in any form or fashion. 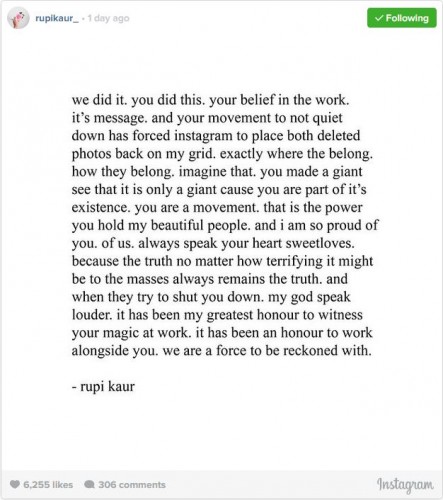 Brown Girl is awaiting a response from Rupi Kaur.