The Hindi word tamasha literally means some form of chaos. Due to its negative connotation, the word is often used to blame someone for being dramatic. However, Hypokrit Theater Company’s upcoming week-long festival, Tamasha NYC, plans to bring positivity and art to the meaning of the word.

Co-founder of the theater company and co-chair of the festival, Arpita Mukherjee has been planning this festival since the beginning of 2016, along with co-founder Shubhra Prakash, technical director Kyle Rosenberg, and PR head Neerja Patel. Taking place from September 26-October 2, the festival will witness diverse plays, dance shows, panels, workshops, and musical nights featuring South Asian and other performers from different minorities. 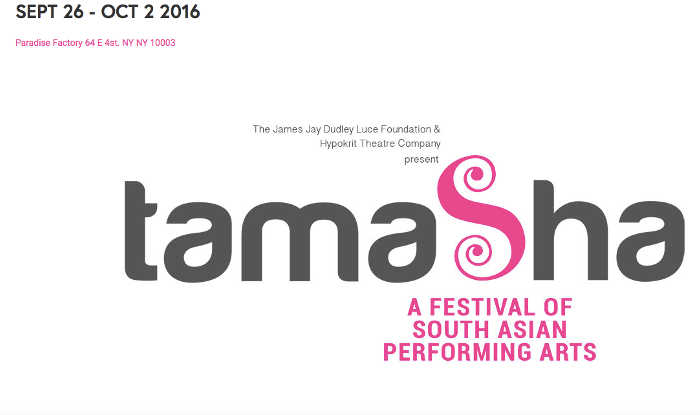 “I can’t believe the festival is already almost here. The thought process that governs our work for Tamasha is the idea that we are facilitators, not curators,” Mukherjee said. “Because the festival is specifically created for emerging artists, the most important thing is to give them the room they need to create.”

She added that they offer guidance and feedback, but they don’t decide what is good and what isn’t, what are the kind of stories that present the right image of South Asia.

“Our goal is for the festival to present so many diverse perspectives, that we disrupt the very idea of what these definitions mean.”

And disrupt they will. With truly a variety of performances from plays like “Hiding Kanye,” which explores one’s identity in terms of race through laughter, music, and dance or “The Music in my Blood,” a classical Indian music drama to a music night featuring artists like Sumona Roy, Xiomara Rolon, Rhythm Tolee, and more, the options are fantastic.

“I’m seriously excited about seeing each and every show in the festival. Not only do we have so many artists across genres, we also have exciting theater productions that combine music and dance,” Mukherjee explained. “These genre-defying productions take Tamasha’s mission even further—don’t pigeonhole the work and always, collaborate.”

It’s not every day we get to see unknown but brilliant talent and one way to change that is through festivals like this one. Mukherjee refers to Alan Yang’s speech at the recent Emmy Awards. Yang, along with Aziz Ansari, won for writing an episode, “Parents,” for their hit show “Master of None.” In his acceptance speech, he spoke out about the need to represent South Asian diversity.

“There’s 17 million of us, and there are 17 million stories. We’re more than just curry and cultural appropriation. Tamasha is a place where South Asian artists can tell a myriad of stories,” Mukherjee added. “We are just scratching the surface of our stories and Tamasha is a platform where artists of all discipline—theater, music, dance, comedy, spoken word—can come together to share those stories with the community.”

Watching these cultures and acts come alive can be exhilarating. Mukherjee wants the audience to leave the shows with a celebratory mood.

Mukherjee said she believes there is a really big role for the South-Asian American diaspora to play in how the cultural conversation moves forward. Art and its patrons are intertwined. An artist must have patrons to make their work — tickets, investments, donations. The community needs to get behind these performing arts.

Mukherjee added when she started years ago, she did not have anyone to look up to. Someone she could see and believe she would be an artist. Today, however, things have changed but we should not look at it as a zero-sum game.

“I don’t think you have to be a Mindy Kaling or a Hasan Minhaj to make it. We are a community so obsessed with a certain view of success, it can hinder us from being an artist. Success doesn’t have to look like being in a big Hollywood film or in a national commercial. We shouldn’t compare the arts to other professions and the stakes should never be—if you don’t do X in X amount of time, you are not successful.”

She said she believes the performing arts are a long pursuit, a lifetime of work. Anyone who embarks on it deserves respect. She herself has been working on several projects for a long time now, including working with Mira Nair, who is bringing “Monsoon Wedding” to Broadway. Mukherjee co-founded Hypokrit in 2014. In the two years since, they launched their brand, created a performing arts festival and produced two award-winning shows.

“I’m proud of the work Hypokrit has done. It put me in front of a person like Nair, who is someone I have admired for so long. Getting endorsement from an artist like her has been an amazing source of engagement for all of that work at the company and every day, we just want to keep doing better,” Mukjerjee said. “Dream big—that’s our motto.”

Now, they will add Tamasha to this list of successes. Organizing a festival like this is a huge achievement and it is also full of challenges.

“The festival is always a roller-coaster. I always start with the dream—to create a platform for South Asian artists, something I never had when I wanted to work in the performing arts. The very idea of that moves me to tears, that I spent so much of my career battling these notions—‘oh we already have an Indian play in the festival,’ ‘oh but your title isn’t in English,” “oh but what will the show be if it’s not an immigrant story?’ I don’t want other young artists to endure that—this is important to me. And if I want that to change, I have to make that change. #ItStartswithUs.”

The festival isn’t her only focus at the moment. Their other flagship event of the year is Indian classics, re-imagined. They are co-producing it with the Junoon Performing Arts. “Devdas” will be performed as a ballet, set in a reality dance competition world. “Chokher Bali” is adapted by world-renowned scholar and Columbia professor Partha Chatterjee.

“Both of these works are directed by me. I think the show is going to be the only thing people will talk about once it hits theaters in November,” Mukherjee said, “and Chokher Bali (The Indian Classics, Re-Imagined) is our flagship event of the year.”

To see the schedule and to purchase tickets, please visit Tamasha NYC.