Imagine taking one of your beloved religious festivals and explaining all the rituals, whimsy, colors, sounds, and feelings of it by using an illustrated A-Z dictionary approach. One Brown Girl, Srishti Guptaroy, did just that in a witty and unprecedented way for Durga Pujo!

Srishti created “The Quintessential Durga Pujo Dictionary” as a valentine to her culture and the nostalgia she felt last year when she was away from her native Kolkata for the first time in two decades. Durga Pujo is celebrated with immense gusto in Kolkata—but havingto be in Banglore for work, a begrudging Srishti found solace in her illustrations. Her self-challenge to encapsulate the “strange charm” of Durga Pujo through the twenty-six letters of the alphabet proved to be both uplifting and powerful, especially in the ways that it connected her to others.

“When I started the project last year, it was primarily to make me less unhappy about spending my days in the office while all my friends and relatives were in Kolkata,” Srishti explained. “Also, this was the first time I was away from home during these four days [of Durga Pujo]. I felt happy and pre-occupied once I started the project. Also, the lovely responses from all the people who could also not be home made me feel that I had created something with a strong connection/value.”

Though Srishti’s background is in fashion design, it is clear from her vibrant artwork that this woman’s creative spectrum is diverse. Aside from her own bouts of nostalgia, Srishti has also gained inspiration from what she pegs as “India cool.”

“In the past five to six years, there has been a wonderful art movement in this country which celebrates the unique quirks and vibrancy of India,” Srishti said. “A lot of independent artists and brands are creating wonderful ‘India Cool’ i.e. art and products which are witty, colorful, and modern yet rooted in Indian nostalgia. My work, too, takes inspiration from this art movement of creating humor and happiness from everyday India.”

I was curious to know what Srishti loved the most about Durgo Pujo and prodded her to share which were her favorite letters/experiences from her dictionary. 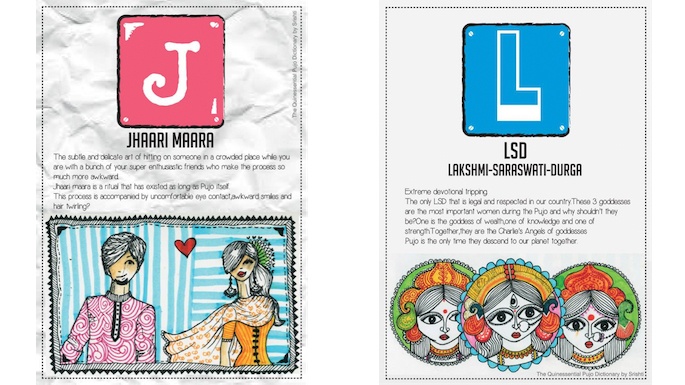 “J-Jhaari Maara. Move over Tinder, this is how Bengalis do it during Durga Pujo!” 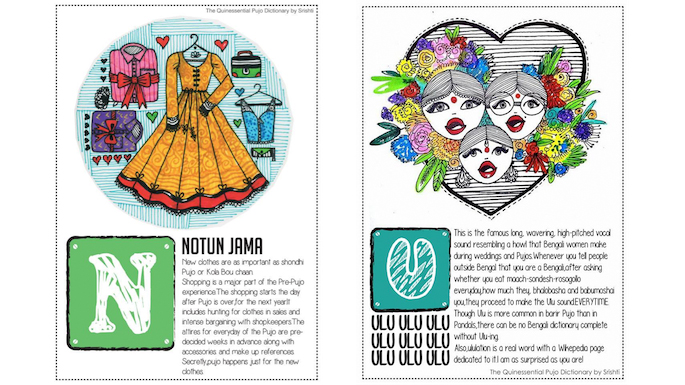 “N-Notun Jama, the secret reason we have festivals is to get new clothes!”

“U-Ullu ulu ulu. Reference: Every movie set in Bengal during the history of time!”

Srishti has received an overwhelming amount of feedback from people, including learning that different people gravitate to various parts of the four-day celebration. Regardless of individual favorites, one thing was certain—Srishti’s illustrations had struck a chord with people, something that hadn’t stimulated the project at first but certainly took on a life of its own.

“I took a lot of suggestions from my parents, sister, and friends before deciding on the words for each letter,” Srishti explained. “I was amazed at the fun responses everyone gave to my obscure questions! Then strangers messaged me with suggestions and ideas after I started uploading the images. I loved how it became a group effort to contribute.”

“I am quite overwhelmed with the positive response I have received for this project because at one point I was pretty sure that I was spamming people’s homepage and newsfeed!” Srishti added. “The most wonderful thing is the response from the non-Bengali community who have probably not attended Durga Puja before. Even so, they seem so excited and positive!”

Srishti’s enthusiasm and creativity are contagious. When asked if she had other similar projects on the horizon, Srishti commented that this was a big and hectic project.

“I think I am going to broaden my horizons and look beyond Bengali festivals.”

Whatever it is you illustrate next, we’re eagerly looking forward to it, Srishti! Click here to see Srishti’s Durgo Pujo Dictionary in full!

[All Illustrations via The Quinessential Pujo Dictionary]

Try This Cranberry Makeup Tutorial for the Perfect Fall Look