Why Feminism is Important to me as an Indian Man

Our lives have been turned into a real life manifestation of the YouTube comment section where having an opinion is grounds for pitchforks and slander. Through all of this, even the once noble concept of chivalry has also found itself in a perplexing new struggle for clarity.

My family is very liberal when it comes to Indian culture and values with respect to women. We don’t have the traditional mindset where we believe women are inferior to men and bearing a child and maintaining a household is solely what destiny has in store for them. I’ve grown up comfortable with the fact a woman might make more than I do or succeed in something I wasn’t able to.

You can also read that as “my parents always taught me to respect women as much as men.”

I have an immense amount of respect for many women in my life. Some have come from extremely male-dominated families who only expected them to marry a good husband, support his family, and be a good biwi. But they were adamant; they would do what they wanted to do, wouldn’t meander or conform to the ladka’s family, and would succeed in such a way other families would seek her out instead. And they did it.

But one day, I was having a discussion with some people about one’s will to succeed, how dedication and hard work gets you places, and I referenced my friend.

“She doesn’t need your blessing about her hard work. She did that work because she wanted to, and doesn’t need to you validate or patronize her.”

How could I complimenting and being in awe of my friend’s success and refusal to pander to the whims of the oppressive side of Indian culture, be a patronizing act? I stated I wasn’t trying to “validate” her; on the contrary, I had a huge amount of respect for her strength. Unfortunately, the opposing party maintained their point of view I was being a patronizing male who felt she needed my approval.

I’ve faced two completely contradictory reactions to me holding the door open for a woman before.

“Thank you so much, you’re a true gentleman!”

“I’m perfectly capable of holding doors myself thank you very much.”

*Opposing LADY used CONFUSION! SIDDARTH is confused! It hurt itself in its confusion!*

“If a woman is walking behind you, open the door for her, it’s the gentlemanly thing to do.”

I never questioned this logic. But in light of recent outcry over sexism and how any act can be misconstrued into a sexist gesture, I regrettably started to question this.

[Read More: Prime Minister Trudeau’s Thoughts on Feminism Will Make You Want to Move to Canada]

Why was it gentlemanly to open a door for a woman, or to give her your jacket because it was cold? Was it because the woman was weak? Was it because I was a “manly man” and could bear the cold better than a woman?

Absolutely not. I got angry at myself. Why was I trying to see the “other side” of these gestures, deliberately trying to play devil’s advocate by perverting a gentleman’s code that has been the standard for good men everywhere? I did all those things because I wanted to, not because I felt a woman couldn’t do something.

My 16-year-old sister in Delhi has a boyfriend. She’s one of the most fiercely opinionated, piercingly blunt, and most beautiful people I know. (She’s also a Taurus like me and was supposed to be born on my birthday but I’ll let you analyze my bias). Recently I was telling my friend,

“I can’t wait to scare her boyfriend, because he better not mess with my sister or I’ll mess him up.”

“Dude, she can handle herself. Let her live her life. She doesn’t need your protection because she’s a girl.”

No. I want to protect my sister not because she is a girl, but because I’m her older brother. I’ve watched her grow up even from 7500 miles away, and I know her strength and independence. She will never let any guy (or girl for that matter) antagonize her to do something she doesn’t want to do. My need to protect my sister stems not from my thinking she’s inept to handle a situation herself, but because she is family.

But it doesn’t mean I think they need a man to protect them because they are a woman.

If your problem with a man is they offer to help open a door for a woman, or offer to walk them home on a dark night, or they commend a woman’s fight and dedication to obliterating Indian stereotypes, then you have a completely wrong interpretation of what sexism is.

I am a feminist. 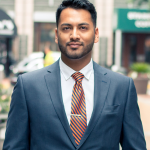 Siddarth Dutta is just your friendly neighborhood Pokemon Master! Apart from being obsessed with catching them all and wrecking gyms, he loves to eat whatever he can get his hands on (sushi oh man), play tennis, and just sit and talk with friends. Siddarth tends to have a lot of opinions, so he loves to talk and discuss things and that’s kinda where the Taurus in him comes out. He’s pretty headstrong and stubborn but will always try to have a fair discussion! You can follow him on Instagram/Twitter at Twitter: sidkijiwani Instagram: legendutta