The Damaging Narrative of ‘I Would’ve Told’

One of the biggest things survivors of child sexual abuse (CSA) struggle with is disclosure. We might blame ourselves for not asking for help when the abuse was happening, feel shame for living with the secret (or “letting it happen” to us), fear that we will be ostracized, unloved, unaccepted, and blamed if we disclose at all. In fact, disclosure is dangerous and the feeling of safety required to disclose is often nonexistent, especially while the abuse is happening.

Yet, there is a pervasive and damaging narrative of…

“If it had been me, I would’ve said something.”

Take for instance Aziz Ansari’s bit about child molesters in Netflix’s original series, “Buried Alive.” Ansari begins with his fear of raising children in a world where terrible things like CSA happens. But, then it takes this turn:

“You read these news stories like, ‘Oh, the soccer coach has been molesting these kids for years.” For years? Why do the kids keep going back to the same soccer camp? …If I was forced to perform oral sex, I definitely would’ve been done. That would’ve been it for soccer. There’s no way I would’ve went back. That would’ve been a firm deal breaker…guitar lessons would’ve started next Tuesday.”

In reality, none of these assumptions hold true. Trauma expert Bessel Van Der Kolk, M.D., describes this well in “The Body Keeps the Score: Brain, Mind, and Body in the Healing of Trauma.”

Children sense—even if they are not explicitly threatened—that if they talked about their beatings or molestation to teachers [or other adults] they would be punished. Instead, they focus their energy on not thinking about what has happened and not feeling the residues of terror and panic in their bodies. Because they cannot tolerate knowing what they have experienced, they also cannot understand that their anger, terror, or collapse has anything to do with that experience. They don’t talk; they act and deal with their feelings by being enraged, shut down, compliant, or defiant.

Children are also programmed to be fundamentally loyal to their caretakers, even if they are abused by them. Terror increases the need for attachment, even if the source of comfort is also the source of terror. I have never met a child below the age of ten who was tortured at home (and who had broken bones and burned skin to show for it) who, if given the option, would have chosen to stay with his or her family rather than being placed in a foster home. (p. 135)

There is an inherent fear of punishment, an inability to process the abuse, and a need to be loved and cared for despite all other actions. In the South Asian community, to which I belong, there are additional barriers to such disclosure. Before I could even remember, I was aware of gendered rules and rules of propriety and engagement with the opposite sex. Without being explicitly told, I received messages such as: girls and women who are loud, boisterous, or otherwise uninhibited in how they engage with the opposite sex are bad. These girls and women bring shame and dishonor to their family. They are essentially “asking for it.”

To know this before puberty, to be so aware, and to have nothing to counter these messages, is a reality for most children, especially girl children. And with this knowledge, it is nearly impossible to not blame yourself or know that you’ll be safe from blame, to say, “This is not my fault and you should believe me.” So, to expect children to readily disclose the abuse they’ve experienced is dangerous, and to say that “I would’ve said something” is most damaging.

Instead, we should think about how to cultivate a safe space for children to disclose. We should think about what our responsibility is in educating children, letting them know that no matter what, we would be there for them, we would believe them. We need to do the ongoing work of creating trust with children. Here are a couple of resources on how to have these conversations:

Let’s stop assuming that children will just know what is abuse, what to do when they are abused, or that they will be able to “say something.” Let’s stop perpetuating the damaging narrative of “I would’ve told” because most likely, you wouldn’t have been able to. 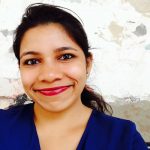 Fatema Haque is an educator dedicated to transformative higher education. She is currently working to change medical education through curriculum reform. In her free time, she enjoys learning, thinking, and writing about self-healing, undoing internalized -isms, and improving self-esteem in communities of color. You can find more of her writing on her blog.

Poem: ‘The Billboards Used to Mock Me’

To the Tourism Minister of India: Women Can Dress Themselves

To the Tourism Minister of India: Women Can Dress Themselves