Coldplay’s ‘Hymn for the Weekend’: Cultural Appropriation or Not?

This post is the first installment of the Brown Girl Magazine “Chai & Chat” series, where our writers have a round table discussion on current topics affecting the South Asian community.

Coldplay and Beyonce’s newest music video, ‘Hymn for the Weekend’ has sparked a massive debate on cultural appropriation. So, we asked our Brown Girls what they think.

In case you haven’t watched it yet, here is the controversial video:

What are your thoughts on Coldplay’s new “Hymn for the Weekend” music video starring Queen B and Bollywood beauty, Sonam Kapoor? Is it yet another example of cultural appropriation in pop culture or is Coldplay truly appreciating Indian heritage?

Atiya: Wait Sonam Kapoor was in it? I must have missed her when I blinked.

Salwa: Our fave, Suraiya Ali, had some thoughts. It sums up my reaction pretty well. 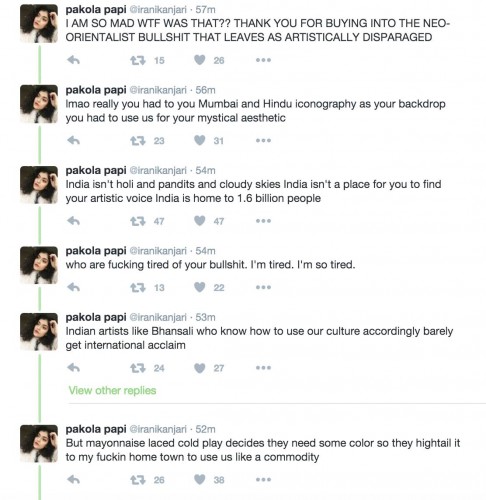 [Read Related: Suraiya Ali, Body Hair, and the Clap Back Heard Around the World]

Salwa: Seriously! On top of that, they sidelined the actual Indians in the video to prop up their misinterpretations of the culture. The levels. I can’t.

Anita: 100% agree on Beyonce looking Middle Eastern. I will say I appreciated them going to India and seeing aapne celebrating Holi and classical dancing.

Atiya: I feel like they faked the Holi aspect for the sake of the video because it makes a good colorful backdrop. They just hired a bunch of kids to come and play Holi. Most of the people were just standing around watching them film it, unlike during real Holi.

Anita: Oh, definitely staged, but I guess I’m looking for a silver lining.

Ena: Actually, both Beyonce’s and Sonam’s outfits were tribal/indigenous wear—that are in fact Indian, and those communities have faced major marginalization by both Bollywood, and just the Indian government in general. Using India and Indians as a background to fulfill your own weird orientalist fantasy is perverse and dehumanizing. This video was epically gross so claps to Coldplay for that.

Ashni: I think the part that bothered me the most was watching Beyonce perform vaguely Indian hand movements like she has been doing it for years. I probably would have respected her way more if she was shown actually trying to learn classical dance with people that were trained or even if she just performed one dance move somewhat correctly. NO idea what’s going on here.

Atiya: The oddest part, honestly, that I’m just now realizing is what makes me uncomfortable about this video is the fact that Sonam Kapoor is in this video, and the street kids have more screen time than her. She is a huge Bollywood celebrity, and all she got was a two second cameo dressed as a marginalized tribal girl? But for some reason, Beyonce is the supposedly huge Bollywood celebrity in the video? That just rubs me the wrong way. When I first heard Sonam was going to be in this music video, I thought she would play herself or something similar. Something with an actual storyline that just happens to take place in India. That would’ve been the right way to do this, honestly.

Ashni: I actually really loved it otherwise, though! Chris Martin, lead singer of Coldplay, met with Prime Minister Narendra Modi as a representative of The Global Poverty Project in efforts to end poverty and provide universal sanitation in India. So, as far as Coldplay is concerned, I don’t think it’s fair to accuse them of cultural appropriation because they specifically are not marginalizing or oppressing Indian culture, quite the opposite in fact. Nor can we hold them responsible for all white people or pop culture as a whole. I do agree that Sonam should have been given a larger role, but I think that can be attributed to the fact that as part of Beyonce’s vocals being included in the song, she may have wanted the main female part in the video (and I’m assuming the vocals may have been decided before the direction of the music video).

Atiya: That’s true. Same thing goes for Priyanka Chopra in “Mary Kom” where her eyes were digitally modified for the role.

Zaynah: I think no matter what there will be differing opinions on it and that’s okay. I definitely was expecting to see more of Sonam, but I feel like Sonam playing herself is so far from what I believe they were trying to achieve in this video. She’s usually all about glam, so I would actually prefer to see more of those kids than her all decked out. I think tribal is just what they were going for. Not saying it was good or bad choice though. I guess the negative aspects of the video weren’t really screaming out at me as much, the cinematography and colors are what really caught my attention. Also I think Holi is going to be staged (because it has to be…) just as it’s staged in Hindi movies and it looks good on film. The comments on YouTube are mixed, especially from desis themselves so I don’t think it’s all black or white.