by Brown Girl Magazine
in Foodie
0 0
0

Being from Hyderabad, there are several spices that are very near and dear to me not just because they’re aromatic and flavorful, but because they remind me so much of the cuisine that shaped my early culinary development.

Spices are important because of their unique flavor profiles and the essential role they play in the dishes they are incorporated in. Specific entrees simply would not be what they are without these necessary flavors.

My favorite spice is the cumin seed because it is essential to most Indian dishes. I cannot imagine trying to go a day in my kitchen without this spice! Another favorite of mine is the cardamom seed— because of its versatility, this spice can be used in desserts and garam masala, as well as being included in many of my favorite spice blends that I like to specially create.

Cloves are yet another great spice utilized primarily in meat-based dishes like gosht korma and Hyderabadi dum biryani. Coriander seed also makes the list. Not only is it ubiquitous in most Indian cuisines, but it’s so uniquely aromatic and flavorful and I use it as a base in my custom spice blends, as well.

Finally, I don’t think I could complete a list of favorite spices without mentioning saffron, with its intense honey and floral notes that are a necessary complement to dishes like biryani and korma.

Which brings me to a personal recipe of mine that incorporates several of the aforementioned spices. This particular biryani recipe is one that I have brought from back home and still use to this day.

To marinate the meat:

Now cover and keep it in the refrigerator for at least 2-3 hours.

In a large pan, bring surplus water to boil. Take a piece of soft cotton cloth. Put 2 cloves, 2 cardamoms, 1 cinnamon stick, 2 bay leaves, 4 black peppercorns in and make a bundle of this.

Now, drop this in the water and it is going to release flavor as much as it can.  (Another reason is I don’t like the bite of whole spices.)

In the meantime, prepare Saffron Milk. Slightly roast and crush the saffron strands and put them in lukewarm milk.  It gives the biryani distinct flavor and orangey- yellow streaks. Keep it aside.

Soaking the rice is also very important because it helps the rice expand to maximum length. So soak it in the water for 30 minutes. Choose long grain basmati rice.

Cook the rice in two parts. When it is just cooked for 1-2 minutes, take out half of the rice. It will go on the first layer of the meat. Continue cooking until you the rice boils. Now drain the water and save the drained water because you will need this later on.

Layering the rice and meat:

Once rice is cooked, the marinated meat will be done. Now, it’s time for assembling.

Put the goat meat on the base of a pan in which you are going to make the biryani. Add drained water (reserved starch water from cooked rice) because the meat needs some moisture to cook which it gets from this water and thus overall biryani remains nice and moist.

Put the half of rice on the top of the marinated goat. Spread fried onion, saffron milk, ghee and garam masala powder on the rice.

Now add the rest of the rice on it and spread rest of the fried onion, saffron milk, coriander leaves, mint leaves and ghee.

After layering the rice and meat, it is also important to leave around 1/4th of the vessel free for the steam to collect and aid in cooking.

Now you can either seal the edges with roti dough or use a piece of aluminum foil and seal the top.

Cook it for 5 mins on high flame, then 15 minutes on medium flame and 30 mins on simmer.

After 45 mins, it’s a good idea to let it rest for 15 mins. Be careful when you are opening the lid because the steam can be dangerous. 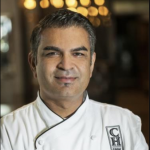 Chef Vijay Sadhu has more than 20 year’s culinary experience at an array of award–winning restaurants around the world, Sadhu was born and raised in Hyderabad, India, and went on to study hospitality and business management at the NationalBusiness Management College in Sydney, Australia. Sadhu currently serves as executive chef of Cook Hall, theModern American Gastropub located in the W Dallas – VictoryHotel. At Cook Hall, Sadhu’s personal influences shine through his menu of globally–inspired, artfully spiced modern American dishes with a Southern twist.