Ari Chalk is a writer, composer, producer, singer, beatboxer, guitarist and percussionist, all in one: a one-man, one-mouth band.

Shooting to viral fame a few years ago with his cover of Justin Timberlake’s “Suit & Tie,” which has garnered more than 100,000 views and made it to Vibe magazine’s list of “10 Awesome Suit & Tie covers from YouTube,” Chalk has been said to have what it takes to be the next Ryan Leslie.

Born and raised in New Jersey to Indian immigrant parents, Chalk loved both Indian and American music growing up. During his college years at University of Illinois at Urbana-Champaign, he had an opportunity to meld the two parts of his musical heritage by joining Chai-Town, a South Asian-American fusion a cappella group. Ari went on to become musical director of the group, leading the group to international success, as well as invites for “America’s Got Talent” and “India’s Got Talent.”

With a civil engineering degree, Chalk currently works a day job in tech while making a name for himself through his solo music career, and has already amassed a million aggregate views for his music across multiple social media platforms.

“I call myself a one-man, one-mouth band because I make my music through live-looping technology,” he said. “Back in the day, lots of people were required to put together a song. Even today, when artists put on concerts, they need a band and that band needs other people behind the scenes. So you’re looking at thirty or so mouths to feed for one artist. Technology has drastically altered the realities of literally every industry on Earth. It has come in the form of being able to use our laptops and speakers to make professional-sounding music. I arrange, produce, and perform all of my music using technology so instead of relying on thirty people, I only rely on one or two.”

This ability to create and distributed music with limited help and costs, according to Chalk, is the way of the future—but is still a relatively foreign concept in the music industry.

“Not only has technology allowed me to produce music, but it has also helped me and other similar artists distribute music,” he said. “I strongly believe that you no longer need to have millions of fans to make a good living in music. You can create the exact type of music you want to create, and reach fans in a cost-effective and efficient manner. However, the music industry is still either trying to fight these advances, or hasn’t taken full advantage of them. Very few in the industry have embraced technology to this point, which is exactly why I find it so ripe for disruption.”

Chalk’s quest to “disrupt” the music industry and its pricey production mechanisms by making professional-sounding fusion covers in the comfort of one’s home can potentially revolutionize the way we buy and listen to music as we know it.

“I believe I stand out from any other artist that’s producing music out there,” he said. As an a capella live looper who beatboxes, my mouth is my instrument – it’s the drums, guitars, violins, lead vocals, and everything in between. Being a South Asian fusion artist heavily influenced by artists like Justin Timberlake, Timbaland, Rishi Rich, and AR Rahman, in addition to everything that I just mentioned, makes me truly unique. To my knowledge, there is no other artist in the world that does it all.” 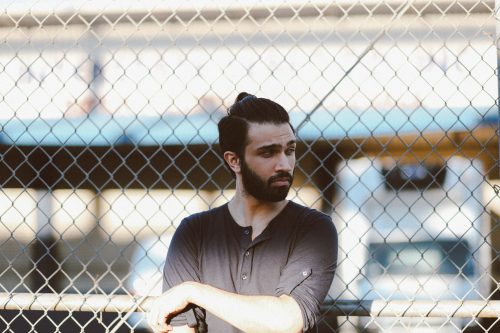 But getting to where he is and gaining the confidence to challenge one of the biggest industries in the United States hasn’t been easy for Chalk.

“In elementary school, I was kind of forced to play the violin and I didn’t like it because I was forced to do it. Because of that, I didn’t play well and didn’t think I was good at making music. It wasn’t until the end of high school that I realized I might be decent at this music thing–my friends used to tell me that I was able to pick up things quickly and that I beatboxed pretty well,” he said. “I turned to covering songs on the piano and people responded well to my arrangements. Despite that, however, my friends and I got booed off the stage during our first big performance. I didn’t even make it onto Chai-Town the first time I auditioned. My music career could’ve ended.”

Indeed, many struggling artists in Chalk’s shoes may have decided to quit their singing aspirations right then and there. Fortunately for Chalk, it was an indomitable will and desire to pursue a career that truly made him happy which enabled him to continue to follow his dreams.

“I always think to myself, ‘In 70, 80 years, when I’m not physically able to perform my art, and am on the verge of dying, what will make me happy?’ I want to be able to look back and say that I pursued what I loved doing, rather than look back and being full of regret because I did what someone else wanted me to,” Chalk said.

With the added pressures of growing up in a South Asian community, aspiring artists may grapple with doing what makes society happy instead of following Chalk’s path less traveled. Despite the security more traditional jobs seemingly provide, Chalk insists a career in music can be equally fruitful, no matter if friends and family say otherwise.

“I know all of this is easier said than done, especially as a South Asian.” he added. ” I do think that most friends/family have noble, but misguided, intentions in pushing South Asian artists towards other more traditional careers. It usually comes from the notion that music is ‘risky’ compared a ‘normal’ job, or other more ‘stable’ careers like doctor, engineer, lawyer. If your goal in life is to do what truly makes you happy, and that’s music, then you shouldn’t be deterred or affected or influenced by anyone else who tries to steer you in a different direction, away from your goal – including your friends and family. I hope to be a model of success as a proud South Asian fusion artist in the music industry, and inspire and guide others to do the same.”

Cross-border Connections: A Canadian’s Views On The President-Elect

Cross-border Connections: A Canadian's Views On The President-Elect