Last week, international calling card company Rebtel caused a media frenzy when they featured a group of nude women—wearing nothing, but a thong and body paint styled in the design of half-saris—in Times Square dancing to popular Bollywood song, “Chamak Challo.”

While the event predictably attracted hoards of passersby, it also attracted a lion’s share of critics who slammed the company for using sexist and exhibitionist methods to promote their business, as well as portray an inappropriate depiction of Indian culture.

Rebtel responded by saying their dancers are simply exercising their freedom of expression.

“We believe in equal rights for women and men, and that women should have the same right to their body as men. That’s why we were inspired by “Free the Nipple,” a movement and film that exposes the double standards regarding female nudity in the United States. We wanted to introduce this movement to the traditionally conservative culture of India.”

The company also released a video of their dancers’ claiming their love for Indian culture, women’s bodies, and their desire to integrate the two into different art forms in order to expose new generations to breaking stigmas and adopting freethinking.

Rebtel certainly lived up to its name and gave us something to talk about—a very necessary conversation on the policing of South Asian women’s bodies.

South Asian culture instructs women to be conservative in how they dress and behave. From a young age, we are taught to cover our bodies and repress our sexuality. Yet, we are simultaneously exposed to Bollywood’s rampant sexualization of the female gender.

So, it’s totally okay when our favorite Bollywood actresses are clad in minimal clothes, dancing to sexy item numbers—that are many times misogynistic—but it’s not okay when a group of everyday women do the same to express themselves?

Who else feels that this double standard and hypocrisy is all too much to handle? (Tweet us if you do too!)

Whether a woman believes in dressing modestly or liberally is her own choice. It was refreshing to see these Bollywood dancers so confident in their own skin and unafraid of their bodies, when in fact, they grew up within the same confines of the double standard all desi women do. They send a bold message: to unleash our independence and not live our lives under the admonishing glare of societal and cultural standards.

Rebtel’s video featuring the dancers also shuts down an antiquated assumption about women who choose to bare more: they are not being coerced nor are they disrespecting themselves.

So, to the critics calling these dancers “shameless whores,” their expression of culture and art is not up for anyone to decide. When these women danced in Times Square, they bravely carried out their dance routine, and I hope it sent the message that women can love their bodies and show it whenever deemed appropriate by them, and not solely for and by male opinion.

I realize not everyone will agree with me.

I realize that some people —women included—did not appreciate their country’s culture being juxtaposed with nudity (but the same women are okay if it happens in Bollywood?)

But, I believe every woman should have the right to choose her own style, activities, and mannerisms based on how she sees fit and not under societal prescribed institutions.

And sometimes we need to see women who look like us and love our culture as much as we do to take a stand for themselves and say:

“This is what I do and this is how I’m going to do it—it might be scary at first, but it’s okay because I love it.” 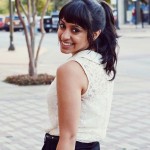 Nikita Redkar is a freelance writer in New York City who interns for Fusion Network where she writes about diversity in pop culture and how it’s shifting the current landscape of racial and gender politics. When she’s not writing, she is taking classes in sketch comedy and reading bizarre astronomy theories. She likes cute animal gifs and dislikes long walks on the beach, plagues, and other cliches.