The Blood Queen Saga Begins With An Invocation

The Blood Queen is an upcoming three-part graphic novel series. Blood Queen is introduced vaguely as a supernatural heroine in an online teaser. The teaser is full of suspense and leaves fans excited for more!

The graphic novel takes place in the fictional town of Grimm City, where crime has taken over. The only safe haven in the chaotic city is the college campus, where Riya Maalik is studying religious iconography.

Who is the Blood Queen? Only until the release will readers find out!

Alpa Banker, the writer and creator of Blood Queen, is known for her role on MTV’s series “Awkward.” Banker headed to LA to pursue a career in acting and admitted that she was initially “reluctant to do writing.” Finally, after wanting to take decision making into her own hands, she began to explore her own creativity.

Banker tells us that her love for characters like Mulan and Xena Warrior Princess greatly inspired her protagonist. She expressed her love for the “badass” girl who still portrayed femininity. Her love for fantasy combined with action also inspired this project. The teaser and the score are written and directed by Banker which display the talent and passion that she has for this genre.

Banker was frustrated that large comic companies choose not to highlight female characters arguing that their stories aren’t good enough to draw audiences despite the fact that movies like “Frozen” and “Maleficent” have done extremely well at the box office. Hence, Blood Queen was born!

I thought that if a female hero in the comic world were written more three-dimensionally, then her story would be that much more interesting. But for a story of that genre to truly be interesting and not fall into cliched comic tropes, it would have to be different and imaginative, and it would have to add value.”

Banker also states that the series “pays homage to existing culture of heroes while pushing the genre even further.”

The recent gang rape epidemic and increased sexual assaults in India also contributed to Banker’s decision that there is an increased need for a female heroine who embodied strength, courage and power.

Banker admits that she has always been a feminist which has led her to question the juxtaposition of the high religious reverence of the Goddesses in India with the poor treatment of the women. She hopes that introducing a 21st century woman figure will change how society views females.

Banker declares, “You can be a feminist and be mainstream.”

She gives examples, such as recent films like the Hunger Games trilogy, “Frozen” and “Maleficent.” Still, the “Blood Queen Series” is not catering only to feminists or just the South Asian community, but mainly fan boys and girls.

A main goal of the “Blood Queen Series” is to create a suspenseful story by featuring a different heroine. The first and foremost aim is for it to be a visual experience for the audience. Banker likens it  to “Dark Knight” in tone and “Thor” in borrowing from religious mythology.

Banker teases that the story borrows from Hindu mythology.

Kali is an influence. She is the most badass of the Gods and Goddess. Any depiction of Her is understood as one to not mess with. She brings light back into the world.”

Like Mulan and Xena, the heroine of Blood Queen fights solely without sexualizing her abilities.

Banker acclaims, “Being in control and badass is SEXY. She doesn’t need ridiculous body proportions or sexy garments or hair flips.” 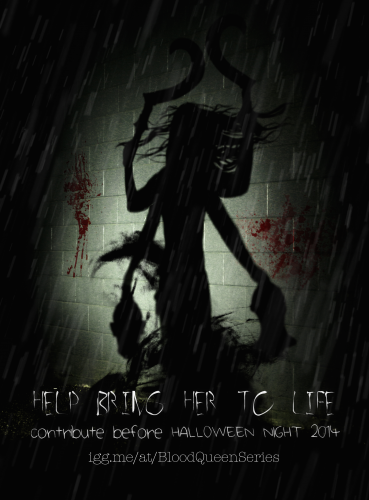