Indo-Canadian artist Nimisha Bhanot reached the height of Internet celebrity this week when her painting series, “Badass Indian Pinups,” went viral after being featured on BuzzFeed. In the feature piece, she explained that the idea for the series was conceived in 2012 when she learned of Jyoti Singh’s brutal rape and murder, the aftermath of which involved a great deal of victim blaming and affronts to female humanity. The series focuses on subjects of Indian women who are portrayed as both confident and sexually liberated. In conversation with BG, Bhanot has revealed more about what inspires her to paint, as well as her professional trajectory, past and future, as an artist.

Bhanot has had an interest in art since childhood but did not begin to take this affinity seriously until high school. She fondly recalls her high school art teacher, Mrs. Whitby, as someone who was pivotal with respect to the development of her identity as a young artist. 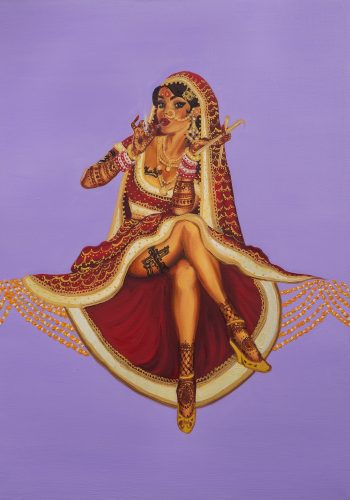 [Not Your Mom’s Bahu/Banga Studios]

“[She] let me break the rules of her assignment guidelines and was very supportive,” Bhanot explained.

Her parents have always been supportive of her career as an artist, albeit with some reservations, now settled, regarding the provocative nature of her work.

When Bhanot later started art school after leaving her college science program, she found the pedagogical transition to be one that freed her from the typical tensions of the educational experience she had known before.

“I had a lot of professors tell me to relax and enjoy learning instead of obsessing over grades and I feel my work has changed significantly since then,” she recalled.

Since art school, she feels that, as an artist, she is more relaxed and confident in her style. 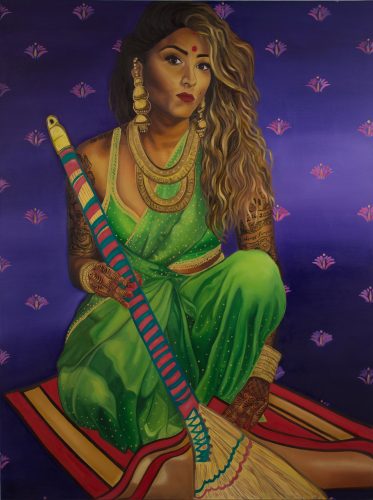 [Sweeping Patriarchy Under The Rug/Banga Studios]

“I focused a lot on abstraction when I was in school but I feel like it only made me want figurative painting more when I learned the importance of the gaze,” Bhanot explained.

In comparison to traditional South Asian art, which she describes as “very rich in its variety of creative expression” in terms of techniques, motifs, and subject matters, Bhanot places her work among those propelling the contemporary movement of South Asian art—a movement that she characterizes as invested in tradition, as well as in identity and individualism.

“These two factors [identity and individualism] are very much downplayed in the South Asian community in favor of filial piety and social respect,” Bhanot said.  “I feel that by creating these paintings I am creating something tangible that represents the things we sweep under the rug.”

Accordingly she believes her work neither conforms nor challenges traditional conceptions of South Asian art forms but, rather, presents a new way of seeing altogether. 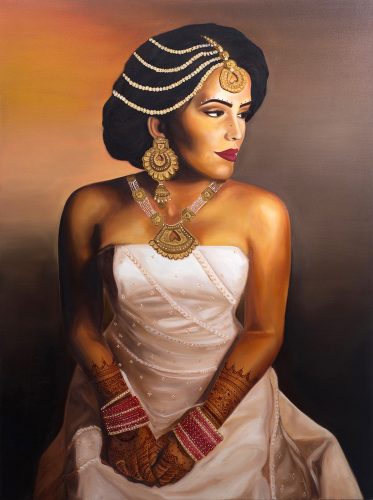 Nonetheless, Bhanot’s experiences in the contemporary art world are impacted by the fact that she is a person of color making art that is deemed “political” in nature.

“Some galleries and curators don’t want work that is provocative,” said Bhanot.  “However, the Internet is allowing for the creation of new art communities, new ways of accessing art and, more importantly, new ways of seeing. I think we will begin seeing a lot more POC making it all the way in bigger galleries very soon.” She even hopefully expressed, citing Jay-Z and Kayne West, “It’s time to put some colored girls in the MoMA!”

As for her inspiration, the “Badass Indian Pinups” artist is inspired by the everyday experiences of women throughout the world who are breaking the rules.

“I know that there are a lot of women out there who feel empowered when they see my paintings,” Bhanot said. “I want everyone that sees my pinups to understand that there is no one right way to feel empowered and that we should seriously stop shaming and judging women for being sexually outspoken. Whether it’s through clothing, jewelry, makeup, writing, or art, people should be free to build and express their own identity without fear of judgement.”

Her common medium is oil paint on canvas or wood panel, but she has also worked with acrylic, gouache, charcoal, conté and ink. In addition, she has also experimented with film, stop motion animation, lithography and alternative print processes. One of her biggest regrets is not learning pottery, but it’s on her list of things to conquer. 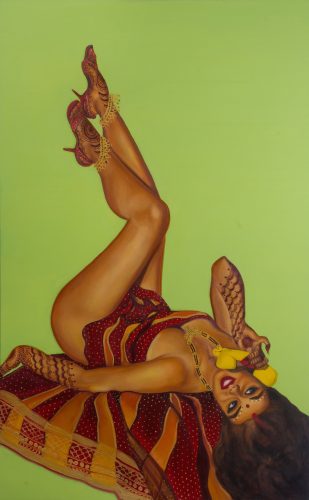 In the future, Bhanot wants to continue making art and, one day, teach it at the university level. She knows that this implies a long, difficult road ahead, but she is ready to face it, head-on, armed with a wealth of patience. She will be launching a new series titled “Social Media and the South Asian Diaspora” this month.

“I’m appropriating themes from classical portraiture in this series and honoring South Asians that share their work through the Internet,” she explained. 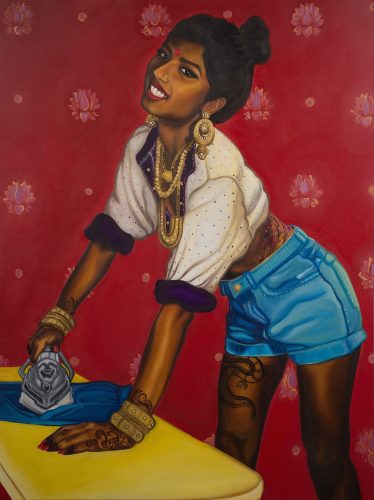 [Ironing Out Wrinkles In Your Perception/Banga Studios]

While portraiture was traditionally used to honor monarchs and members of the social gentry, this series will honor those who own their identity using artistic avenues, such as art, writing, poetry, makeup and fashion, as tools for their social activism.

When asked about her single favorite piece of work, Bhanot explained that she loves all of her creations equally, rendering it impossible to choose just one. Well, Nimisha Bhanot, we here at Brown Girl Magazine share the same adoration for all of your work. Keep on bringing us art to disrupt the status quo while launching contemporary South Asian art to unprecedented heights!

To buy prints of Bhanot’s work, check out her Etsy store.

The Time my Life Became as Dramatic as a Bollywood Movie