I moved to New York City in 2008. Having seen a decent slice of the world before moving here, even at 23, I knew immediately that the expense of this city would offer much more than just a few great memories.

As a gay woman of Indian origin, New York immediately became home in physical, emotional and mental capacities, much more than any other place I had ever lived in.

By population, New York is one of the biggest cities in the world, and the ethnic, racial, religious, national and cultural diversity of the city is largely unrivaled. I moved to New York from France; I grew up in Virginia. A move here meant that New York was the first place I found a strong intersection of two cultures that are often thought of as mutually exclusive – south Asian and queer. Indeed, one of the subcultures that thrive in New York is the DesiQ community or queer people of south Asian origin.

I started embedding myself into the DesiQ community in my third year after my move here, that was also the year I began writing my debut novel, “The Paths of Marriage.” The story follows three generations of Indian and Indian-American women, the last of whom is gay. There’s no doubt that without the DesiQ community of New York, I would have never examined this part of my identity with the same depth. That reflection is found buried throughout the pages of my novel and not just with the character, who is a lesbian.

One of the biggest boons in writing “The Paths of Marriage” was that, it served as a catalyst for me to finally come out to my parents. I did so very late by Western standards, at 27. I knew the reasons why I waited so long and I have no regrets about that decision. Nonetheless, I can’t claim to have a long history to reflect on my decision to come out to them.

Coming out in any situation is a highly personal decision, even now. Especially in a diverse city like New York, many are still conflicted between the greater open LGBT culture and their personal life that are not in-line with this openness towards queerness. As my book gathers steam, readers have started to reach out to me asking for advice for their own coming out’s. Though I’d love to swoop in, superhero style, and deliver the ultimate cure-all advice for each of their questions, I know that does not exist. I know that they know that it does not exist, either.

All I can offer to my readers, and really to anyone still in the coming out struggle is this – you’re not alone. I don’t mean this in a way to only remind you that you might have a friend or two who doesn’t care about your orientation. I mean this in a global community sense. Although I am not someone with decades of experience being publicly out, I am – for the first time – speaking openly about these issues. For me, it was a few short years between coming out to my parents and becoming a voice for the DesiQ community.

While I can’t promise it will be the same for everyone else, I know that slowly but surely, we as a community are speaking more boldly, more concretely and more assertively in favor of LGBT and DesiQ rights. Technology is better linking us together, and the media is more realistically covering our struggles. Until you find yourself in a safer, kinder place, we are here for you. I am here for you. 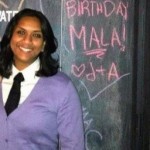 Mala Kumar, the author of The Paths of Marriage, is an international development and ICT4D practitioner based out of New York City. She has held innovative jobs with some of the most prestigious institutions in the world, including the United Nations. Mala is excited to use her global network and The Paths of Marriage to connect people as part of a growing community and dialogue on building a more compassionate, open, and empathetic world. When not immersed in work or writing, you can find Mala exploring NYC’s culinary adventures, in an intense workout at the gym (often to mitigate the effects of said culinary adventure), planning her next international excursion, or blocking out subtitles on the latest French film. Feel free to contact her at authormala@gmail.com. Find her upcoming events on her website.